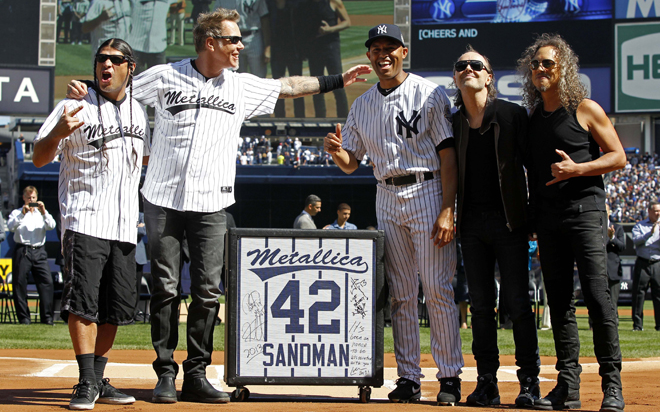 Whenever a hitter emerges from the batters box or a pitcher is called to the mound during a home game they have the opportunity to request walk up or entrance music. We’ve compiled a list of our 25 favorite walk up songs from over the last couple years. Check it out below.

Number 24 Ben Zobrist “Say it Now” Julianna Zobrist
Julianna Zobrist’s jaunty, heavily produced and not-all-that-popular dance pop single “Say it Now” would typically be an odd choice of a walk up song. But, as you may have guessed, Zobrist is the wife of Tampa Bay Ray’s star Ben Zobrist. So while “Say it Now” is unlikely to strike fear in the pitcher’s heart or fire up the crowd at the Trop, it surely helps Zobrist out on the home front.

Number 23 Derek Jeter “Square Dance” Eminem
For his 2013 walk up song Jeter chose “Square Dance” by Eminem, which begins with the lyric “People it feels so good to back,” a reference to all of his recent injuries. Given that the maladies continued throughout the year maybe the Yankee captain would have been better off with Machine Gun Kelly’s “Invincible” if he wanted to do the white rapper thing.

Number 22 Koji Uehara “Tweezer” Phish
Phish has been known to stretch out the performance of their song “Tweezer” to well over thirty minutes. This makes it an odd choice for a pitchers walk out song. But after Red Sox‘s closer and apparent Phish-head Koji Uehara’s utterly unreal 2013 — which included an ALCS MVP and basically no base runners — maybe jam bands will be the new thing in walk out tunes. If so expect to be slowly bobbing your head along with Grateful Dead and Widespread Panic at your local ballpark.

Number 21 Jason Bay “State of Love and Trust” Pearl Jam
The recently retired Jason Bay was once a very good baseball player. But for the last four years of his career he was a very bad baseball player who was been paid tens of millions of dollars for stinking. On the bright side, he knows how to match his walk up music to the city he’s playing in. During his final season and first as a Mariner, the Canadian-born leftfielder came to the plate to the grunge sounds of Seattle’s own Pearl Jam. And, no, it didn’t improve his hitting one bit.

Number 19 Chris Perez “Firestarter” Prodigy
They call relief pitchers “fireman” because they come in the game and put out the flame of baserunners. Yet then-Cleveland Indians closer Chris Perez used the Prodigy hit ‘Firestarter” as his entrance music in 2013. Maybe that’s why he’s no longer the Cleveland Indians closer. Nevertheless, the 1996 big beat classic is a pretty terrific walk up song. For a hitter, that is.

Number 18 Daniel Murphy “I’m Shipping Off To Boston” Dropkick Murphys
The Dropkick Murphy’s song “I’m Shipping Off To Boston” has been a walk up favorite ever since Martin Scorsese put it in the “Departed” soundtrack in 2006. But what we like about New York Mets‘ second baseman use of the tune is that his last name is Murphy. Now if he only played for the Red Sox. Or had a wooden leg.

Number 17 JJ Putz “Thunderstruck” AC/DC
AC/DC will forever associated with dominant closers, thanks to Trevor Hoffman’s use of “Hells Bell” throughout his career. JJ Putz isn’t quite in Hoffman’s class as a ninth inning man. In fact, he no longer closes for the Snakes. But the Arizona reliever still dominant enough to credibly continue the Australian rocker’s special baseball legacy. As for Thunderstruck, if there has ever been a more dominant hard rock song we’ve yet to hear it.

Number 16 Prince Fielder “Requiem:” Lacrimosa Mozart
Although it is often said Fielder is a vegetarian, he’s actually been back eating meat since 2009. But even though the Texas Rangers’ first baseman is no longer the rare morbidly obese vegetarian he remains something even rarer: a professional athlete (or person under thirty) who listens to classical music. We know this because the rotund slugger sometimes comes to the plate the sounds Mozart’s Lacrimosa Requiem.

Number 15 Wade Leblanc “Born on the Bayou” Creedence Clearwater Revival
Wade LeBlanc has been a fairly mediocre pitcher over his six year big league career. His choice of walk up music, however, is pretty stellar. Not only is Creedence Clearwater Revival’s “Born on The Bayou” one of the finest songs ever recorded and the perfect embodiment of the legendary group’s style of “swamp rock,” but Wade Leblanc is from Lake Charles, Louisiana, which is right in the heart of Bayou country

Number 14 Andre Ethier “Royals” Lorde
Lorde scored one of the biggest hits of 2013 with Royals, her screed against conspicuous consumption. The 16-year old from New Zealand said she got the inspiration for the song’s title after seeing a picture of Royal’s legend George Brett in National Geographic magazine. Andre Ethier, who plays for the Dodgers, started to using Royals as his walk up song late in the 2013 season. Given all the trade rumors surrounding the Dodgers’ outfield, maybe Ethier ends up in Kansas City and everything comes full circle. 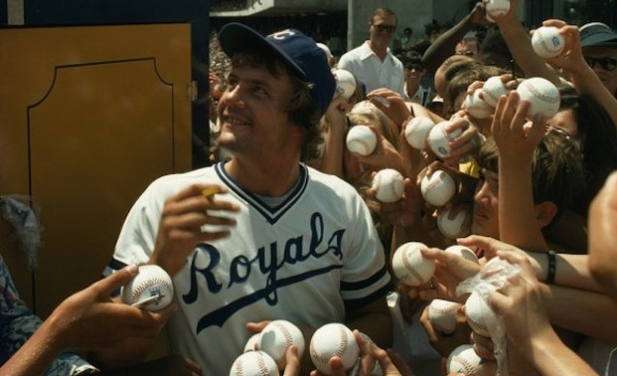 Number 13 Josh Willingham “Your Love” Outfield
For some reason, multiple bigger leaguers use the Outfield hit “Your love” as their walk up music. It’s a solid eighties tune, sure, but it is also in no way suggestive of baseball player who is about to punish a baseball with his bat. We guess the link to baseball is the name of the band. And since Josh Willingham actually plays the outfield, when he’s not strutting up to the plate with “Your Love” in background, he gets credit for it.

Number 12 Kevin Jepsen “Call Me Maybe” Carly Rae Jepsen
“Call Me Maybe,” the Carly Rae Jepsen song that wormed its way into ears everywhere in 2012 has no business as any grown man’s walk up music in 2014. But we’ll give Los Angeles Angels relief pitcher Kevin Jepsen a pass here because his last name makes the selection sort of funny. And no, Kevin isn’t related to Carly Rae. And the Canadian pop star is currently dating singer Matthew Koma, so if this was an attempt on Kevin’s part to curry romantic favor with his surname twin it hasn’t seemed to work.

Number 11 Andy Pettite “Boys of Summer” Don Henley
Don Henley’s haunting 1984 hit Boys of Summer is about facing middle age and remembering the glory days of youth. What better song for Pettite, a 41-year old five time World Series champion, to come out to in his last year before retirement. Especially since the “Boys of Summer” phrase has also long been associated with baseball players, completely independent of the Henley song

Number 10. Shane Victorino “Three Little Birds” Bob Marley
Throughout most of his career Victorino played the Bob Marley song “Buffalo Soldier” before his at-bats. But the Red Sox‘s right fielder switched it up mid-season in 2013 and moved to another Marley classic, “Three Little Birds.” The Fenway faithful certainly took the change and now sing the songs “every little thing is gonna be alright” chorus whenever the Flyin’ Hawaiian’ comes to the plate or makes a good play. 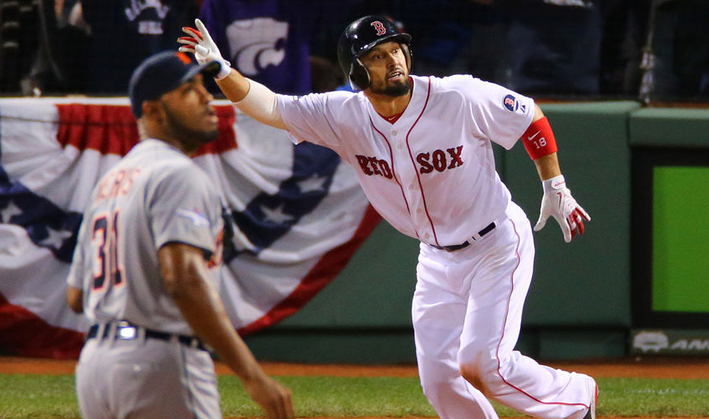 Number 9. Chris Davis “I Get Wicked” Thousand Foot Krutch
Nobody was more wicked to pitchers in 2013 then Baltimore Orioles first baseman Chris Davis, who seemingly came out of nowhere to slug 53 home runs and knock in 138. But don’t say he didn’t worn opposing hurlers of his plans to annihilate their offerings with extreme prejudice : Davis approached the plate in 2013 to thomp of the Thousand Foot Krutch hit “I Get Wicked.”

Number 8. Ichiro “Party Rock Anthem” LMFAO
He doesn’t say much and always looks so serious, but there have long been inklings that Ichiro is a pretty funny guy. Like that time the Yankees right fielder deeked everybody (including his poor pitcher) by pretending he was going to have to jump up against the wall to make a catch before snagging it easily before the warning track. What we’re trying to say is that we’re pretty sure when the cameras aren’t rolling the Japanese hitting machine dons goofy glasses and does a bit of shufflin’’.

Number 6. Kevin Youkilis “Just a Friend” Biz Markie
Biz Markie’s comedic rap song “Just a Friend” is sort of a weird choice for walk up music or, really, for any sort of ceremonial application. But, then again, who doesn’t want to start belting out the karaoke classic’s out-of-tune chorus whenever you hear it play. Well done, Kevin Youkilis. We wonder if he is going to use the ditty this year when he plays in Japan.

Number 5. Shin Soo Choo “Gangham Style” Psy
Shin-Soo Choo is clearly the most famous South Korean baseball players there’s ever been. And Psy’s “Gangham Style” is clearly the most famous song to ever emerge from the Korean peninsula. So late in 2012 Choo did the right thing and aligned all things famous and Korean by adapting the danceable novelty hit as his walk up tune.

Number 4. Joey Votto “Paint it Black” Rolling Stones
Joey Votto is known for his Ted Williams-like batting eye and for almost never popping out. He’s also known for his walk up music, the unique, sinister intro to the Rolling Stone’s hit “Paint it Black.” Votto’s been using the tune for years and were pretty sure the pitchers in the National League now cringe whenever it’s on the radio.

Number 3. RA Dickey “Game of Thrones Theme”
RA Dickey is awesome. He climbs mountains. He gives great interviews. He wins Cy Youngs. He’s a pitcher even though he was born without a ulnar collateral ligament. He also has great taste in television, and uses the “Game of Thrones” theme as his walk out music. The knuckler is coming!

Number 2. Chase Utley “Kashmir” Led Zeppelin
With its intricate Middle-Eastern arrangement and stomping beat, the Led Zeppelin epic “Kashmir” comes on like an approaching army. A very large approaching army. Chase Utley, who has used Kashmir as his walk up music for most of his career, is only one man. But in his prime he was about as intimidating a hitter as there was baseball — especially come postseason — and Kashmir has always fit him to a t.

Number 1. Mariano Rivera “Enter Sandman” Metallica
No recent baseball player is as associated with a song as Yankee legend Mariano Rivera is with his entrance music, Metallica’s “Enter Sandman.” Initially Rivera wanted to go with Guns and Roses “Paradise City” as his song, but a member of the Yankees production team convinced him “Enter Sandman” — a dark tune about being put down forever — was a choice far more befitting a shutdown closer. The rest is history, and when the Yankees retired Rivera’s number at the end of the 2013 season Metallica was on hand at Yankee Stadium to serenade the future Hall of Famer with the song they will now be forever linked through.