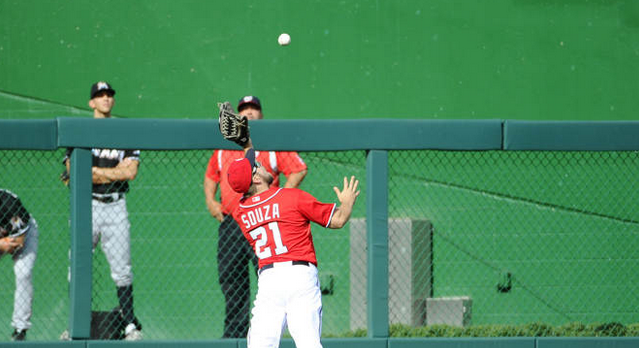 Jordan Zimmerman pitched a no hitter against the Miami Marlins in his last start of the season.
The Nationals righthander was cruising along for most of the game, but with two outs in the top of the ninth Christian Yelich smoked a ball into the left-center gap.

Rookie leftfielder Steven Souza Jr., who had been put in the game for defense, used all of his 6″4′ frame to stretch out and make a spectacular game-ending catch.

After the game, Zimmermann expressed his appreciation for Souza’s heroics by telling reporters,“Whatever he wants he can have. I’ll buy him anything.”

Upon hearing of Zimmermann’s offer, Souza joked that he’d take BMW, before giving the company line that he was just doing his job and doesn’t deserve anything from the hurler.

Now it looks like Souza is getting that BMW. According the Washington Post’s Adam Kilgore, Souza had this exchange with reporters before game 1 of the Nationals NLDS against the Giants.

What is Zimmermann getting you?

“I’m not sure,” Souza said, shrugging as he walked down the dugout and into the clubhouse.

Kilgore writes that he isn’t entirely sure if Souza was being serious, or was just messing around with the press.

It isn’t unusual for a pitcher to dole out thank you gifts after a no-no. Roy Halladay famously gave engraved Baume and Mercier watches to everyone who was in the Phillies dugout after he pitched a perfect game in 2010.

But a BMW would be a particularly meaningful gift for Souza. The 25-year old spent almost all of 2014 in the minors and his salary for the year is likely less than the sticker price for a 7 Series.