Sure, everybody is a bit sick of the Derek Jeter retirement tour. We’ve criticized it in the past, but we have to admit Gatorade — one of his long time sponsor’s — ode to the Yankee great is pretty good.

The minute and half long spot, titled “Made in New York is more catered toward the internet than it is TV. And judging by the reaction to it around the web, it looks like Gatorade has scored the viral hit they were after.

In the spot, Jeter gets out of a town car on his way to Yankee Stadium. He walks through the streets of the Bronx where he is greeted by excited fans. (Who are judging Jeter by his impressive body overall work, not his current .595 OPS.)

When Jeter finally gets to the ballpark he is greeted by an adoring crowd. Frank Sinatra’s legendary hit “My Way” plays throughout the commercial.

Gatorade is giving Jeter as grand a goodbye as any of the teams he terrorized for two decades. In addition to the commercial, Gatorade will also sponsor a full page ad in the New York Daily News and Sports Illustrated on September 28-29, in which Jeter will thank his fans.

Jeter recently passed Cap Anson for sixth on the all-time hit list. Tris Speaker, number five, still has 63 more hits than the Yankee captain at 3514. So Jeter will end his Hall of Fame career in the six spot. Not so bad, especially when you add those 200 postseason hits (and five World Series titles.) 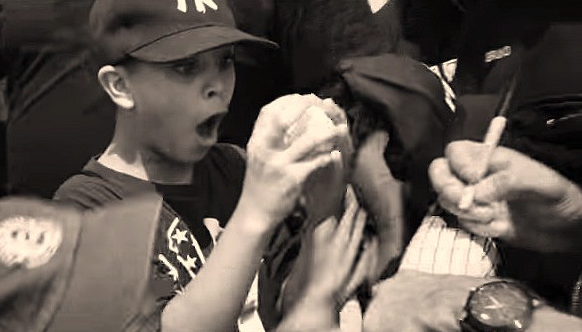