Welcome to LineUpForms.com, the ONLY website online that is dedicated entirely to EVERYTHING that relates directly or indirectly to the sport of baseball. Obviously there are baseball related websites online that have been around for years, and in some cases decades, but as already mentioned… they only cover a certain area or aspect of the sport.

This website has been categorized and structured in such a way to help any man, woman, child, fan, etc… find exactly what it is that they are looking for that has to do with this age old bat and ball game. Below is a list of the main areas of the website that are worth taking a look at:

Leagues – In this section you will learn about baseball leagues which are groups of teams that compete against each other under the same regulations and guidelines. Baseball leagues range from amateur youth associations to Major League Baseball, in which participants are paid average annual salaries of 3.2 million dollars to play in front of crowds that average 31,000 fans per game.

Major League Baseball, the oldest and most famous professional baseball league, consists of the American League and the National League. Prior to the year 2000 the two leagues were separate legal entities and they still feature slightly different rules. There are also 240 minor league baseball organizations, stretching all across the Americas. Many of these minor league teams are affiliated with MLB clubs and act as their feeder systems for talent development.

Although baseball is the most American of sport, there are also many leagues — some professional — throughout the rest of the world. The most famous of these leagues is Japan’s Nippon Professional Baseball League. The NPL has been around since 1950, although there was a precursor league of Japanese baseball formed way back in 1934. South Korea also features a well-established professional baseball league and there are more fledgling leagues in countries such as Germany and Australia. Some baseball leagues — the Negro League, for example — were once prominent but are now defunct. Learn more about baseball leagues in this section.

Amateur – If you play baseball and you’re not getting paid for it that makes you an amateur baseball player. We don’t have an exact number of how many amateur baseball players there are in the U.S., but it’s safe to say it’s in the millions. Amateur baseball involves folks of all ages. Kids participate in organizations like Little League, Dixie Youth baseball and Cal Ripken Baseball. Teenagers get involved in Babe Ruth leagues and American Legion ball. Adults keep themselves young by playing Team Town ball and in the Men’s Senior Baseball League and in the All-American Baseball Association.

Some casual baseball apparel is made to look like the actual design of the apparel worn by major league players.  Whereas other baseball apparel is influenced by what big leaguers and other players wear but doesn’t feature the logos and functionality of game worn apparel. Of course some baseball apparel is functional, and is designed to play baseball in. (Although you could still use such apparel to look stylish.) Learn more about the history of baseball apparel, and where the best places are to buy it, in this section.

Equipment & Gear – Baseball is perhaps the most equipment and gear oriented team sport there is. Think about it. While most sports require a ball, it is very difficult to play anything resembling proper baseball without a glove and a bat. In fact, if you were to try to do so you’d be playing stickball, a separate game. And gloves and bats are just the tip of the iceberg when it comes to baseball equipment and gear. Baseball equipment and gear includes bat, ball, base, glove, catcher’s mitt, first baseman’s mitt, batting gloves, batting helmet, baseball cap, catchers helmet, athletic cup, jockstrap, pelvic protector, uniform, sliding shorts, sunglasses, baseball cleats and hitting doughnuts. 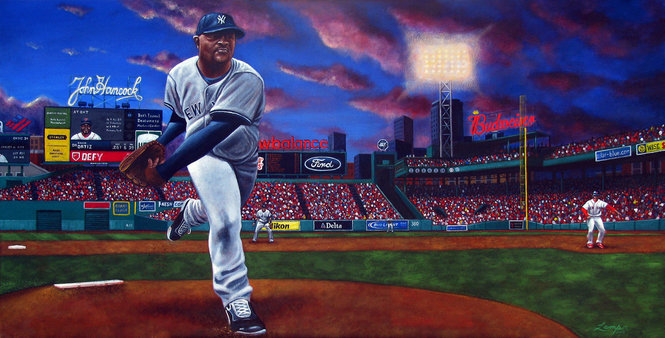 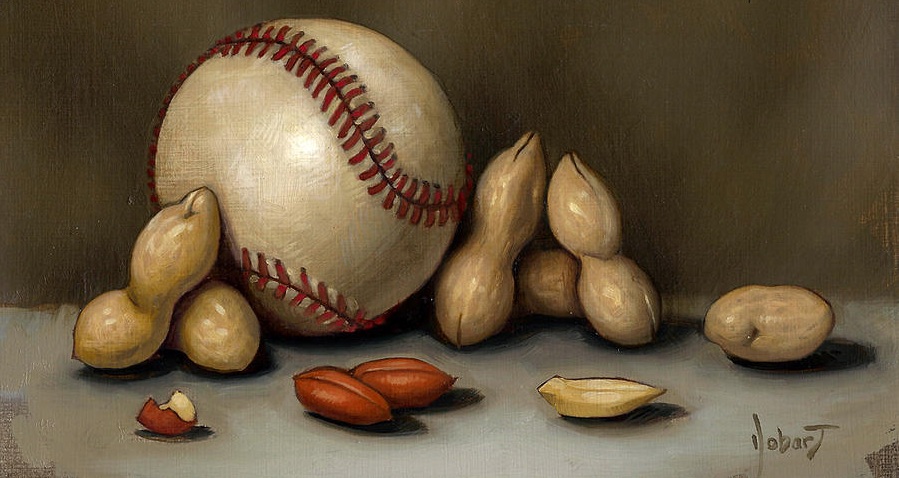 Information – Like with anything else, if you want to learn more about baseball, you need to suck in as much information about the sport as possible. Lucky for you, the person who wants to learn about baseball, there is a plethora of baseball information available. Baseball has a long as history as America’s pastime, and thus it has been immortalized in books, songs, movies and poems. These are all mediums in which you can enrich yourself by learning more information about this enthralling game.

Memorabilia – Baseball memorabilia are souvenirs and mementos, including balls, bats, gloves, tickets, bases, autographs, helmets, jerseys, cards, stickers, sticker books, plaques, programs and magazines. Baseball fans find either sentimental or monetary value (or both) in memorabilia. Why certain things have value beyond their production costs has always been a mystery. (See Beanie Babies or the Dutch Tulip Mania of 1636.) There is nothing inherently valuable about a signed baseball, besides how much it costs to make the baseball and bring it to market. Yet thanks to a strange mix of emotion and nostalgia a signed baseball can be worth thousands of dollars, depending on who signed it.

News – If a baseball game took place in the ballpark but nobody wrote about it would it really have happened at all? The answer to this variation of an old philosophical question is that it depends. It would certainly have happened for the players who played the games, and the fans who watched in the stands or on TV. But the majority of baseball fans weren’t able to watch the game. So for those fans it only “happens” if its action and results are reported on by the press. This is all to say that news is a very important part of baseball. Ever since the game’s beginning the press has distributed baseball news to the public. In the old days the afternoon and evening editions of newspapers were sometimes held so they could include the baseball scores and newsreels played baseball highlights before the Sunday matinee.

As the years progressed the nature of baseball news changed. While newspapers are still an important source of baseball news they are competing with TV shows, such as Sportscenter, and websites that deliver baseball news in real time. Major League Baseball even has its own news source, MLB.com, which reports on all the happenings on the field and around the league. It also has its own television network with news delivery capabilities. In this section we explore all the different kinds of baseball news and where the best places are to find it.

Training – If you want to improve your baseball skills, you need to train. That goes for every baseball player from Little League to the Big League. There are many methods of baseball training, some of which are similar to training for other sports but many of which are distinctive to baseball. One the best ways to improve your baseball skills is by sharpening your hand-to-eye-coordination, and there are drills that can be done to accomplish this. Muscle memory is also an important part of baseball training. When a third baseman reaches down into his glove and prepares to fire the ball to first base his muscles should be trained in a certain way so that he doesn’t even have to think to throw the ball at the correct velocity and trajectory.

Muscle memory — in particular the ability to repeat a motion — is especially important to hitting and pitching, the two physical pillars of baseball. In this section we will discuss the many different ways you can train for baseball, and what methods of training are best for different skill and age level of baseball players. 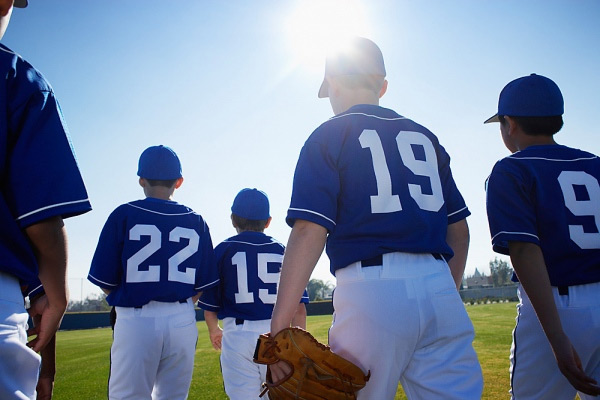 Youth – With ten million youngsters playing organized baseball every year baseball is the second most popular youth sport in America, trailing only basketball. Unlike basketball, which just requires a ball and two hoops, or soccer, a ball and two nets, you need a lot of moving parts to play a proper baseball game. You need bats, multiple balls, gloves, bases, helmets and a field big enough to have a proper outfield and well manicured enough so the youngsters won’t be at constant risk of head injuries from bad hops.

In other words, setting up a baseball game up isn’t easy or cheap and its continued popularity among America’s youth is testament to the game’s enjoyability. Of course you don’t have to have a proper game to have a good time playing baseball. Just having a catch with friends or a pickup game with one hitter vs a pitcher and a couple fielders at the local park are also ways that kids can enjoy America’s pastime. In this section we will explore youth baseball, including the different kind of leagues kids play in, and the different kind of rules that they play under.

After looking at that very detailed list of subjects covered here on the website, it has probably become even more obvious that the claim above about LineUpForms.com being focused on covering EVERY baseball related topic wasn’t a joke. Obviously these are just a few of the areas of the website that cover baseball related topics, but there are many more to be found and discovered. If there is a topic that you have yet to be covered or discussed here on the website, please use the contact page to make your concerns known and it will DEFINITELY be addressed. Aside from that, LineUpForms.com is very confident in saying that you WILL find whatever it is that you were looking for that brought you to this… and while you are here, please be sure to enjoy your stay. Take care.