There has long been a love affair between Hollywood and baseball with many a great movie taking place on the diamond. Check out the ten best baseball movies of all-time below.

Number 10: Bang The Drum Slowly
When it comes to sports movies that’ll make a grown man weep like a little child the gold standard is the football melodrama “Brian’s Song.” But if you already been through that and would like to exercise your tear ducts some more you should check out ‘Bang The Drum Slowly.’

The movie stars Michael Moriarty (Law & Order) as Henry Wiggen, an ace major league pitcher who befriends the team’s dimwitted catcher Bruce Pearson (Robert De Niro.) Due to his lack of skill and intellect, Pearson is the butt of many his teammates’ jokes. But when Wiggen discovers that Pearson is dying of cancer he adjusts his contract so that Pearson will be his personal catcher, saving him from being cut from the team.

‘Bang The Drum Slowly” was one of De Niro’s first big roles and helped establish him as the premier actor of his generation. Vincent Gardenia, who plays the team’s manager Dutch, was nominated for a Best Supporting Actor Academy Award for his work in the film.

As any baseball fan knows, it was Maris who passed Ruth, only to have baseball commissioner Ford Frick decree there would have to be an asterisk after his total of 61 in the record books because his homers came in a 162 game season whereas Ruth only had 154.

In *61, clearly a labor of love for Crystal, a huge Yankee fan who followed Mantle and Maris as a kid.  He takes you behind the chase, dramatizing the pressure both men were under — Maris started losing clumps of his hair, and Mantle’s famous boozing and womanizing got more out of control as the summer went on. The film garnered solid reviews with particular praise for Barry Pepper and Thomas Jane, who played Maris and Mantle respectively.

Number 9: Sandlot
If the line “You’re killin’ me, Smalls” pops into your head every time you’re dealing with somebody who is being clueless or dense, that means you are a fan of the 1993 coming-of-age comedy ‘Sandlot.’

In ‘Sandlot’ the new kid in town (the aforementioned Smalls) joins up with a ragtag band of sandlot baseball players who have to teach him the game because he’s not very good. Most of them resent him at first.  However, they eventually bond over their shared experience, including adventures with killer dogs, pretty lifeguards, and carnival rides.

The film features child actors Tom Guiry, Patrick Renna and Chauncey Leopardi with James Earl Jones, Karen Allen and Dennis Leary in the adult roles. Its sugary, nostalgic look back at early 60s America was praised by critics and it has been compared favorably to ‘A Christmas Story.” ‘Sandlot’ spawned two sequels. Neither are very good.

The 1942 film covered the life and career of legendary Yankee Lou Gehrig, including his complicated relationships with his mother, who didn’t want him to be a baseball player, and teammate Babe Ruth, who was standoffish when Gehrig first joined the Yankees but came to accept him as an equal.

Of course, things get all weepy when Gehrig catches an incurable and mysterious disease, begins to quickly waste away, and makes a humble and dramatic speech in front of a sold-out Yankee Stadium crowd in which he declares himself “The luckiest man on the face of the earth.”

The film came out only a year after Gehrig’s death and many of his Yankee teammates, including Ruth, play themselves. Gary Cooper was Gehrig.  Despite being conspicuously right handed (Gehrig was left handed) the iconic actor snagged one of the movies 11 Academy Award nominations. 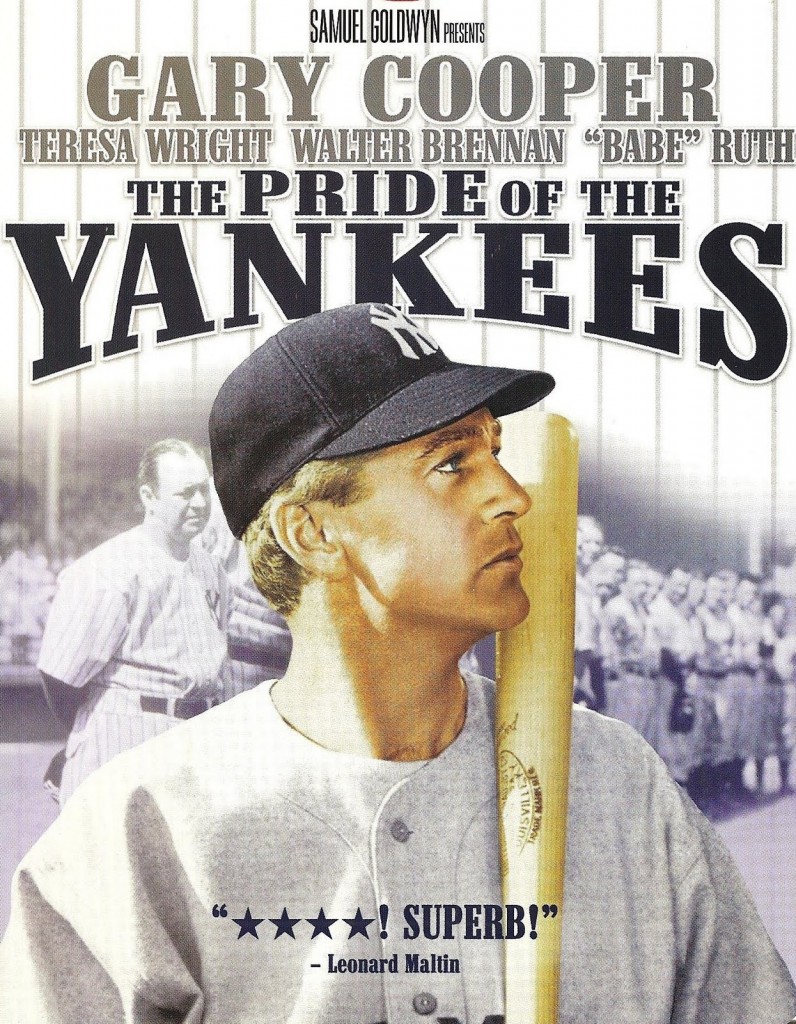 Number 7: Eight Men Out
The Black Scandal — in which members of the Chicago White Sox conspired with gamblers to throw the 1919 World Series — is probably the darkest chapter in Major League Baseball history.

Although the eight players accused of taking the bribes were acquitted in a court of law, baseball commissioner Kenesaw Mountain Landis believed there was enough evidence to throw the players out of baseball for life, hence the movie title “Eight Men Out.”

The film explores the motivations of the eight players in questions– some of whom most certainly took the bribes, some of whom may not have, and poor Shoeless Joe Jackson, who may have been too dimwitted to understand what was going on. It also delves into the other colorful characters of the scandal, including the sportswriters who uncovered it and the gangsters who initiated it.

Number 6: Field of Dreams
“If you build it, they will come.” That’s the voice novice farmer Ray Kinsella, played by Kevin Costner, hears when he is working in his cornfield and then sees an image of a baseball diamond.

So he builds a baseball diamond, in part because the farming thing wasn’t working out that well. Soon after he does Shoeless Joe Jackson and the seven other banned Black Sox appear and begin to play ball. But only Ray can see them. And nobody else comes. This sets Kinsella off on a mystical journey that involves a reclusive author and a major league ballplayer who never got a chance at bat.

Will the others see the players? Will the people come? Watch Field of Dreams and find out!

Number 5: Major League
The catcher on his last legs. The speedy center fielder who can’t hit. The prima donna third baseman who’d rather be checking his stocks. The slugger who can’t handle the curve. The crafty veteran pitcher with his Vaseline and emery board. The fireballing closer with no control. The grizzled manager.

Major League, a fictional account of a Cleveland Indians’ season, trots out just about every baseball stereotype there is. Then it has them play for an evil owner hellbent on fielding a loser so she can move the team. It couldn’t be more formulaic. But it’s also really fun.

1982 Cy Young Award winner Pete Vuckovich is among the former players who have cameos in the movie. In Vuckovich’s case, he goes against baseball type as Yankee slugger Clu Haywood.

Number 4: Bull Durham
“I believe in the soul, the cock, the pussy, the small of a woman’s back, the hanging curve ball, high fiber, good scotch, long foreplay, show tunes, and that the novels of Susan Sontag are self-indulgent, overrated crap. I believe that Lee Harvey Oswald acted alone, I believe that there oughtta be a constitutional amendment outlawing Astro-turf and the designated hitter, I believe in the ‘sweet spot,’ voting every election, soft core pornography, chocolate chip cookies, opening your presents on Christmas morning rather than Christmas eve, and I believe in long, slow, deep, soft, wet kisses that last for seven days.”

The film was based on writer/director Ron Shelton’s experiences as a minor league player and starred Kevin Costner, who makes a habit of appearing in baseball flicks. And who really does have a nice swing.

Number 3: The Bad News Bears
Throughout the first 50 or so years of movie history kids were always cute and cuddly and precocious. Even if they acted like rascals, they were still well-groomed and talented. That started to change in the 70s, with the 1976 comedy Bad News Bears leading the charge.

The Bears were a Little League team made up of the worst players in the league — only allowed to play by a court decree aimed at more inclusion. They were fat and slow, and they cursed and spit. Their coach Morris Butterman, played by Walter Matthau, was just as rough around the edges and was the town drunk to boot.

However, with the help a couple ringers — a juvenile delinquent slugger and an acid-tongued girl pitcher — they gain respectability. The Bears didn’t win in the end. But they played well enough that their coach let them at his cooler full of beer. The film was followed up by two sequels and a 2005 remake.

Number 2: Moneyball
Oakland A’s general manager Billy Beane has quite a reputation for being able to build winning teams despite limited resources. Which is a nice reputation to have. He was also played by Brad Pitt in an Academy Award-nominated film. Which is just nice in general.

Billy Beane’s early adoption of a sabermetric approach toward analyzing and scouting players was subject of the 2003 Michael Lewis book Moneyball. That became the 2011 movie Moneyball.

While a movie about baseball statistics could be a tough sell, something about Moneyball clicked and it made over 100 million at the box office and scored six Academy Award nominations.

Number 1: The Natural
Based on the 1952 Bernard Malamud novel, The Natural tells the tale of a farm boy with a lightning forged bat who is about to take the baseball world by storm when he is shot by a deranged woman, derailing his career.

Fifteen years later Roy Hobbs, who is played by Robert Redford, reemerges as a 35-year old rookie with seemingly no past, still wielding his special bat, Wonderboy. He quickly becomes the best hitter in baseball. However, there will be twists and turns and more dangerous temptresses before Hobbs can ride into the sunset…

The Natural co-stars Robert Duvall, Kim Basinger, Barbara Hershey, Glenn Close, Wilford Brimley and Michael Madsen. Malamud’s original story is somewhat based on the tale of Eddie Waitkus, who has an all-star first baseman for the Philadelphia Phillies before being shot by deranged stalker Ruth Ann Steinhagen. Waitkus almost died but was able to come back the next year and post solid numbers. Waitkus’ nickname as a young ballplayer was “The Natural.” 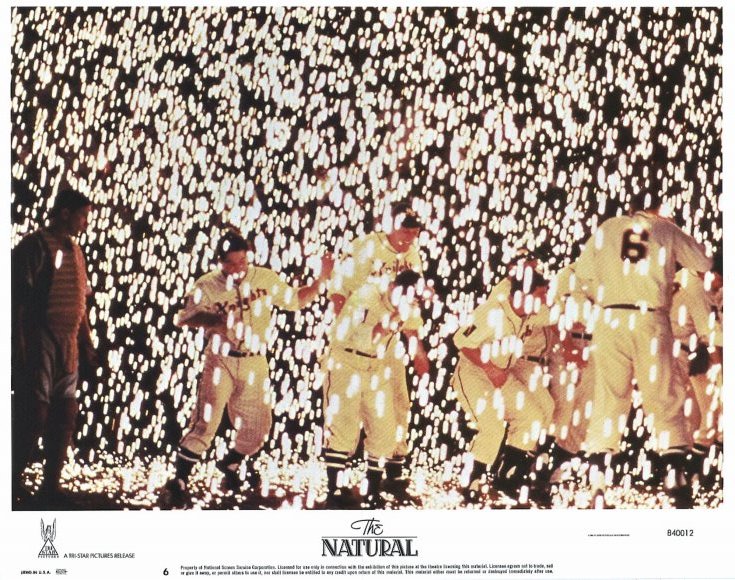 One thought on “Best Baseball Movies”