Clayton Kershaw And the Best Scoreless Innings Streaks of All-Time

On Thursday night, Clayton Kershaw had his scoreless innings streak snapped at 41 innings. It was a home run by Padres third baseman Chase Headley that broke the two-time Cy Young winners string of zeros. The sixth inning blast was one of only three hits and the only run the 26-year old gave up in a complete game win that included 11 Ks.

Kershaw’s was the longest scoreless inning streak since Brandon Webb fired off 42 straight in 2007. Remember Webb? He won a Cy Young for the Diamondbacks in 2006 and then followed it up with two runners up before arm trouble ended his career at age 30.

Webb’s streak was tied for the 13th longest in big league history, making Kershaw’s run of excellence the 15th best. The top ten longest scoreless innings streaks of all-time are below.

10. R.A. Dickey 44.2 New York Mets 2012
2012 was the year of Dickey, with the 37-year old knuckleballer snagging the NL Cy Young. His scoreless streak lasted for much of June and included three shutouts. After giving up five runs in the game that ended the streak, Dickey pitched eight shutout innings in his next start.

7. Sal Maglie 45 New York Giants 1950
A late bloomer who also banned from baseball for five years for jumping to the Mexican league, Maglie’s first full season came in 1950, when he was already 33. He made up for lost time by firing off a 45 inning scoreless streak which started in a complete game in which he gave up seven runs early and included three relief pitching appearances between his regular starts.

7. Doc White 45 Chicago White Sox 1904
Deadball era pitcher Doc White’s 1.78 ERA was only third best in the American League in 1904. His 45 inning scoreless streak during the season was the best, however he had to share the honor with a pitcher who had a much more famous name.

7. Cy Young 45 Boston Americans 1904
That would be Cy Young, the pitcher whom all other hurlers are compared to. The 511 game winning ace also posted 45 straight zeros in 1904, stealing White’s thunder.

6. Carl Hubbell 45.1 New York Giants 1933
Hall of Famer Carl Hubbell did Young and White ⅓ an inning better in 1933. The screwballing lefty had three shutouts during his streak and, like Maglie, also made relief appearances between his regular starts. Baseball was different back then.

5. Bob Gibson 47 St. Louis Cardinals 1968
One could make the case that Bob Gibson 1968 season was the best ever for a pitcher. In addition to his 1.12 ERA and league leading 268 Ks, Gibson pitched five straight shutouts during his June scoreless streak. He had 13 shutouts overall in that year. 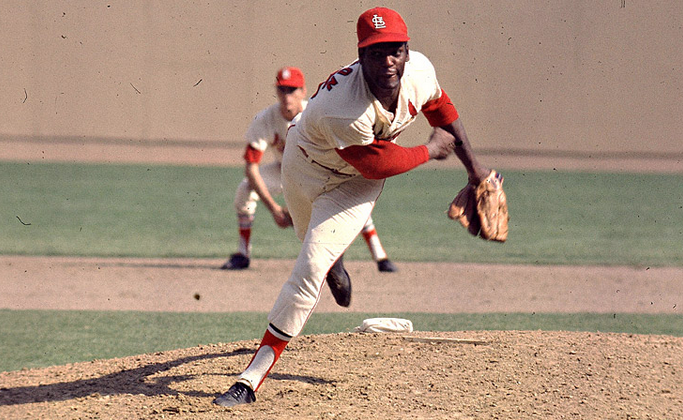 4. Jack Coombs 53 Philadelphia A’s 1910
Big jump from Gibson to Coombs, who completely dominated all of 1910 with his 1.30 ERA, 31 wins and 224 Ks. He didn’t give up a home run the entire season and led the A’s to a World Series win with three victories in the Fall Classic.

3. Walter Johnson 55.2 Washington Senators 1913
Coombs scoreless streak record only lasted three years and it should have been no surprise that Walter Johnson was the one to break it. The Big Train had an all-time record 110 career shutouts and had a 38-26 record 1-0 games. Both his wins and lose totals in such games are big league records.

2. Don Drysdale 58 Los Angeles Dodgers 1968
1968 was the year of the pitcher. So much that the baseball lowered the mound for 1969. Drysdale’s contribution to the historic season was his 58 inning scoreless streak, which included six straight shutouts. 1968 was also Drysdale’s swan song; arm troubled ended his Hall of Fame career in 1969 at age 32.

1. Orel Hershiser 59 Los Angeles Dodgers 1988
Twenty years later, another Dodger broke Drysdale’s legendary record. Hershiser’s streak included five shutouts and then a ten scoreless innings’ no-decision during his last start of the season. Although he was scored upon in the postseason, he pitched (and hit) well enough to be the 1988 World Series MVP. 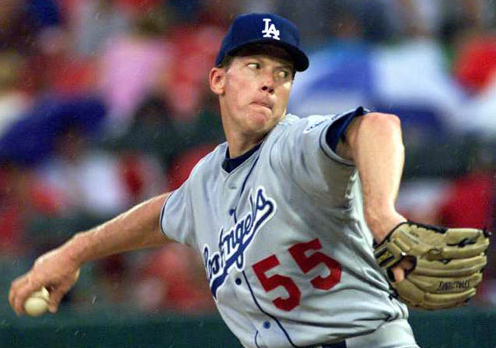