Derek Jeter’s retirement tour is winding down, and to commemorate the future Hall of Famer 20-year career the Yankees will be bestowing #2 with an honor one usually has to die to receive.

Beginning on Sunday — Derek Jeter Day at Yankees Stadium — the Yankees will be wearing special Derek Jeter patches on their hats and jerseys for the rest of the season. Derek Jeter will also be presumably wearing the patches. Which is akin to being able to attend your own funeral.

While it may be a great way to sell more merchandise, it comes at a pretty inopportune time as there is a growing narrative that Jeter, who is still technically alive, is effectively killing the Yankees season with his poor play.

Jeter’s never been a good defensive shortstop. Now at 40 — an age at which few men have ever played baseball’s most challenging position on a regular basis– he’s pretty awful.  While his hitting, which used to more than make up for his lack of range in the field, has been shaky all year, it’s fallen off a cliff as of late; Captain Clutch is OPSing .207/.226/.261 in his last 116 plate appearances.

Jeter probably isn’t the worst player in baseball, but he is probably the worst in the American League who plays regularly while batting in the top half of the lineup. (Ryan Howard has that prize in the National League.)

Jeter is the third player to get the full on retirement treatment over the last three years.  While his former teammate Mariano Rivera and Braves third baseman Chipper Jones were still playing at a (legitimate) All-Star levels during their farewell tour, Jeter’s presence may end up costing the over-achieving Yankees a shot at the playoffs.

Maybe once Jeter is memorialized everyday in the Yankees game day duds, manager Joe Girardi will finally be comfortable with batting the 40-year old down in the lineup and giving him a healthy dose of off days. However, with New York sitting five games out of the final wildcard spot, it may be too late to make a difference. 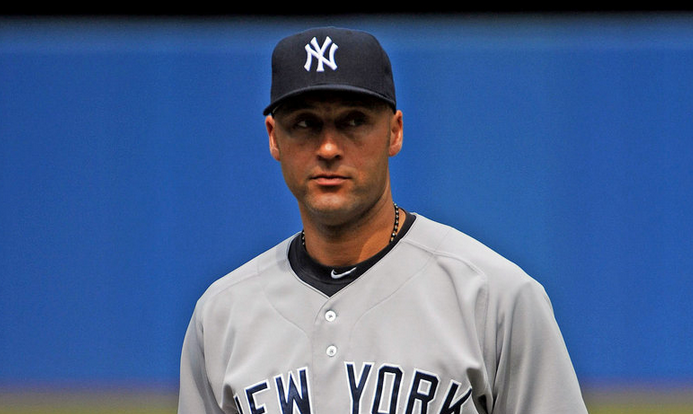