Is The Derek Jeter Farewell Tour Going to Make You Nauseous? 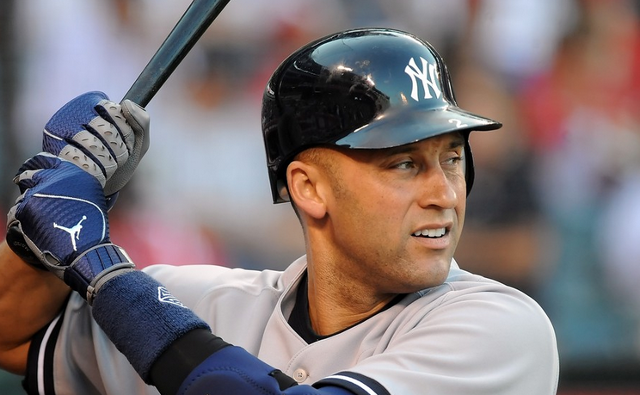 The first athlete to get a high profile farewell tour was basketball great Kareem Abdul Jabber. The sky hook artist formerly known as Lew Alcindor was feted with gifts during the 1988-1989 NBA season as he played for the last time in the arenas he had long dominated.

The big man came away with vacation packages, statues, lots of jazz records (he was a big fan of the genre), a motorcycle, a rifle, a rocking chair and even a portable phone. Yes, in 1989 a portable phone was sort of a big deal.

The next big NBA farewell tours would come in 2003: Lots of pump and circumstance for Michael Jordan and a more low-key but still respectful goodbye to David Robinson. (In the interim NBA legend Magic Johnson had been forced to retire abruptly due to his medical condition and his Hall of Fame rival Larry Bird was not one to tolerate such nonsense.)

But it’s been baseball that’s been throwing the multi-city retirement bashes lately, and during the 2014 season New York Yankee shortstop Derek Jeter will follow Chipper Jones and Mariano Rivera as the third consecutive future Hall of Famer to get the treatment.

The first baseball players to get full on rocking chair tours were Cal Ripken and Tony Gwynn, both in 2001, with Ripken the Jordan and Gwynn the Robinson in terms of intensity. Eleven years would pass until Jones’s celebration.

There have been plenty of worthy retirements between Ripken and Jones. It’s just that greats like Pedro Martinez, Jeff Bagwell, Greg Maddux and Randy Johnson didn’t give the advance noticed required to get a tour. (And stars like Roger Clemens and Barry Bonds were compromised by their PED ties, anyway.)

And therein lies what is so potentially nauseating about Derek Jeter, 2014.

Sure you had your nice moments when Rivera’s rival Red Sox presented him with a seat from Fenway, or when Metallica shredded his famous entry music live. But during his tour Rivera, the Yankees and, Major League baseball also sold a lot of special edition retirement hats, apparel and collectibles. Additionally, there were corporate tie-ins during many of Rivera’s 20 farewell stops. 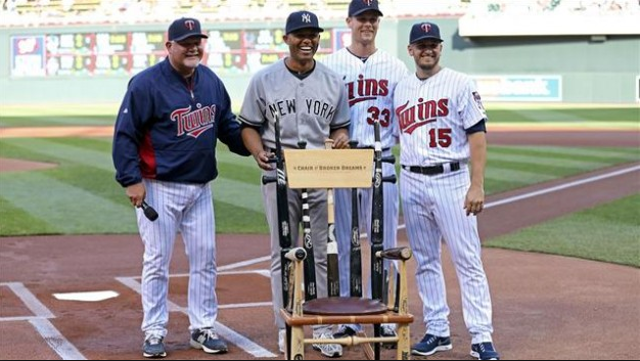 Since that’s how it went down with the modest closer, imagine the potential for rank capitalism with Jeter, who could be accurately described as half-man half-Madison Avenue.

Never fear, says Major League Baseball’s executive vice president for business Tim Brosnan. “Derek is conservative in his approach to monetizing anything,” Brosnan told the New York Times. “We will be respectful and take our marching orders from him.”

Alrighty then. Although anyone who has walked by one of Derek Jeter’s signature 24 hour gyms or caught a whiff of Jeters’ signature cologne might question Brosnan’s insights into the shortstop’s approach to personal monetization.

Then there is the question: Does Jeter deserve a farewell tour? As great as Rivera was — and nobody ever did his particular job better — he was also a guy who threw about 65 innings a season. Would Rivera have been so honored if he had played his entire career in Milwaukee? And would Jeter have been Jeter if he hadn’t spent all of his seasons under the lights of Broadway?

Luckily, in Jeter’s case, we have a pretty good comp in 2012 retirement boy Chipper Jones. For his career Jones posted 85.1 Baseball Reference WAR (wins about replacement) in 10614 plate appearances. Jeter  has so far posted 71.6 WAR in 11968 plate appearances.

Yes, Jones was the better all-around player. In part — but not entirely — because he was moved from shortstop to third base during his rookie season.  Whereas Jeter remained at shortstop and lost value for playing the position quite badly for most of his career.

But WAR doesn’t touch upon World Series wins and the Yankee’s captain’s five to one advantage on that front is quite significant, especially for ceremonial occasions like a farewell tour. So let’s call it a wash. If Jones deserved all of the pomp so does Jeter.

That will be of little solace to Yankee-haters and fans-of-the-little-guy when Jeter is being showered with bronzed bats, fishing poles and anecdotes about how he “always played the game the right way.”

On the bright side, it doesn’t look like there will be any more baseball farewell tours in the near future. Maybe David Ortiz, but he has the DH, PEDs and the general awfulness of Boston-area sports fandom going against him.

So it looks like baseball is going to have to make its commemorative hat money elsewhere for a while.

One thought on “Is The Derek Jeter Farewell Tour Going to Make You Nauseous?”