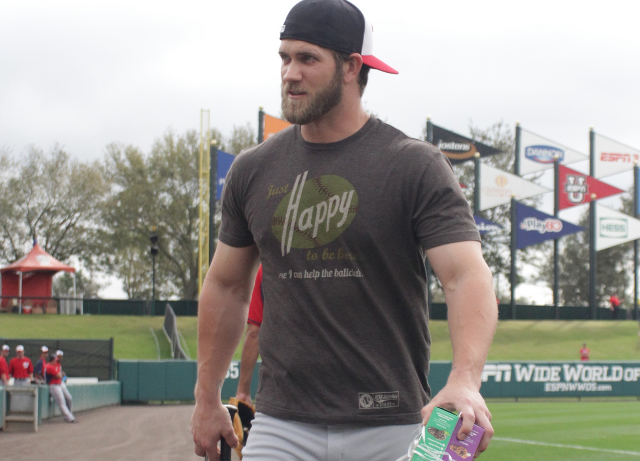 Bryce Harper first came on the radar in May of 2009 when the-then 16-year old was featured on the cover of Sports Illustrated, hailed as “Baseball’s Lebron.”

“His name is Bryce Harper. You don’t know him, But every big league scouting director does. He hits the ball a desert mile, clocks 96 on the gun, and he’s only 16, more advanced than A-Rod and Junior were at the same age.  And his ambition is as great as his talent,” the magazine gushed.

That ambition was such that Harper earned his GED after his sophomore year in high school, allowing him to start playing junior college baseball. It also made him eligible for the Major League Baseball draft a year early and the 17-year old went to the Washington Nationals with the number one overall pick of the 2010 draft.

After a year of seasoning in the minors, Harper was called up to the big club in 2012 and was pretty darn effective, posting a 5.2 WAR (Wins Above Replacement) in 139 games. Injuries limited Harper to 118 games and 3.8 WAR in 2013. Still, if you add up those two seasons, Harper has 9.0 WAR by age 20. A-rod had 8.7 WAR by his age 20 season and Griffey Jr. had 8.4. Looks like SI was prophetic about Harper’s comparative advancement.

Trout also came into spring training of 2013 looking a lot heavier than he did the year before. 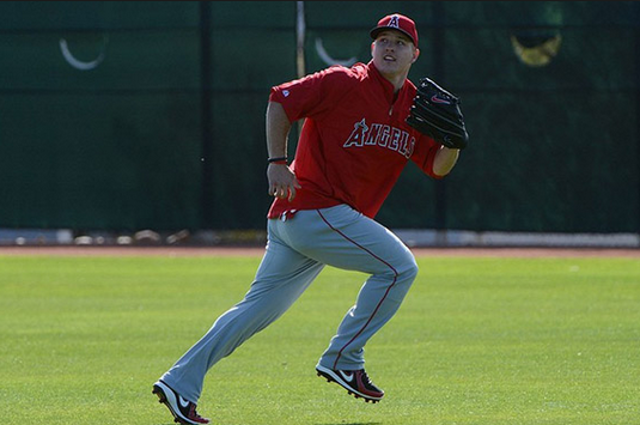 Obviously the extra weight didn’t bother him much, and it also seems to have given Harper an idea. The Nationals’ outfielder was quoted this off season saying he wanted to  take a month off of his baseball training to get “big as a house.”

But unlike Trout, who got his extra weight by eating about 50 too many Subway foot longs (or at least that what it looked like), Harper has been seen at National’s camp in Viera, Florida with suddenly enormous biceps popping out of his shirt.

Yes, Harper is carrying Girl Scout cookies in the first photo, which was snapped by WJFK, a DC-area radio station. Of course these days when a pro athlete suddenly becomes jacked there will be suspicions his training regiment consisted of more than just Thin Mints. Harper got out in front of that speculation with this t-shirt:

PED or no PED — and Harper is certainly still young enough to achieve those type of results with good old weight training — there is also the question of whether it behooves a baseball player to put on that kind of bulk.

Harper was plenty powerful in 2013, slugging 20 homers in just 118 games.  And extra pounds — even in muscle — could hurt his speed and mobility, which are both important parts of his game. On the other hand, Harper says he lost over 20 pounds during the 2013 season and coming into 2014 with the extra weight may allow him to keep his baseline strength deeper into the year.

What do you think? Can jacked Bryce Harper challenge chubby Mike Trout for baseball’s best all-around player in 2014? Let us know in the comment section.