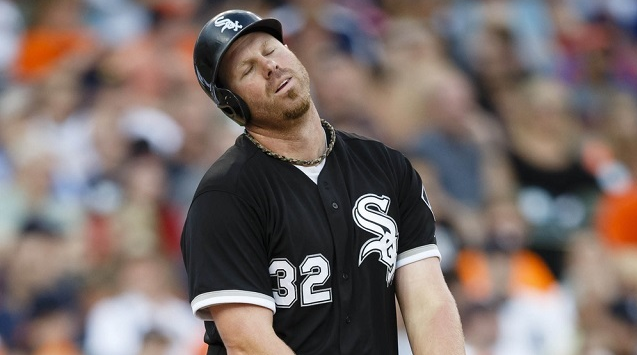 Two of the bigger men in baseball now have new addresses.

In front of the midnight August 31 cutoff for postseason rosters, the Oakland A’s acquired slugger Adam Dunn from the White Sox in exchange for minor league pitcher Nolan Sanburn. Dunn, who leads all active players in games without a postseason appearance, had cleared waivers and also waived his limited no-trade clause to go Oakland. The 34-year old will be a free agent this offseason, and the White Sox will pay about half of the $2.5 million owed to Dunn for the rest of this year.

According to Tom Verducci of Sports Illustrated, the Giants were also in the mix for Dunn.

Dunn has 460 career home runs, fourth among active players and 36th all -ime. He’s gone deep 20 times this year, and his .777 OPS in 2014 places him 17 percent better than the average AL position player.  That jumps to .808 against righties, and given the A’s propensity for platoons, Dunn should rarely see a lefty in Oakland.

The A’s have fallen behind the Angels in the AL West in large part because of an offense that has struggled since the team dealt Yoenis Cespedes to the Boston Red Sox. Billy Beane and company, who have already acquired Jeff Samardzija, Jason Hammel, Sam Fuld, Jon Lester and Jonny Gomes in other deals this summers, hope Dunn can fill Cespedes’s void against right handers and get their lineup — which has been shut out be the Angels two days in a row — back on track.

At 6’6 285 Dunn is arguably the biggest player in baseball.  Jonathan Broxton is also in that argument at 6’4 315. The relief pitcher was moved today, too, from the Reds to the Brewers for two minor league players to be named later.

Broxton, a two-time all-star, has been enjoying one of the better seasons of his career results-wise. The 30-year old sports a 1.86 ERA and 1.014 WHIP and was effective in the closer role when he filled in for the injured Aroldis Chapman during the first month of the season.

He’ll also make $9 million next year, with a mutual option for that amount for 2016. With the Reds out of contention, they decided that was too much money to pay for a setup man, effective as he’s been.  There are also red flags in his peripherals; his k rate per nine innings is a career low 6.9, and his FIP is only 3.52.

The Brewers, whose lead in the AL Central has shrunk to a season-low one game, hope Broxton’s good fortune will continue. They are set at closer with Francisco Rodriguez, but have lost both Tyler Thornburg and Jim Henderson for the year with injuries and Broxton will add much-needed depth to Milwaukee’s bullpen.

The Orioles, who have an eight game lead in the AL East, have also been busy over the past 24 hours. The Birds acquired the oft-traveled infielder Kelly Johnson from the Red Sox for Jemile Weeks and Ivan De Jesus. The also received outfielder Alejandro De Aza from the White Sox for a pair of minor leaguers.