Dodgers Shift Is Most Extreme Yet 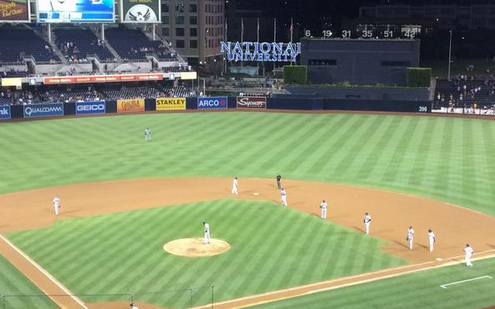 When San Diego’s Seth Smith stepped up to the plate, he was staring at what legendary Dodgers broadcaster Vin Sculley called “a chorus line” of fielders between first and second base.

Lefty Smith is an extreme pull hitter, so he’s seen shifts before. But nothing like this one, which called outfielder Andre Ethier into the infield so he could join Adrian Gonzalez, Dee Gordon and Miguel Rojas on the right side. Third baseman Justin Turner stayed at home in case of a bunt.

Dodger manager Don Mattingly turned to the previously unseen tactic with one out and the bases loaded in the bottom of the 12th. Smith ended up grounding to Gordon, who fired home and got the force on the runner. The next batter Yasmani Grandal then won the game with a single.

It’s possible the Dodgers would have been better off trying for an inning ending double play, given were Smith ended up hitting the ball.  That they weren’t able to has more to do with playing the infield in, rather than stacking up on the right side.

Hitting is way down in baseball, with MLB’s overall on-base percentage at its lowest point since 1973.  The explosion of infield shifts that has occurred over the last several years has likely contributed to this decline.

Some have called for rules limiting how many fielders a team can play on one side of the infield. Do you agree that shifts have gone too far, or are the just the next step in baseball’s strategic evolution?