Craig Biggio May Be Favorite For Astros Managerial Opening 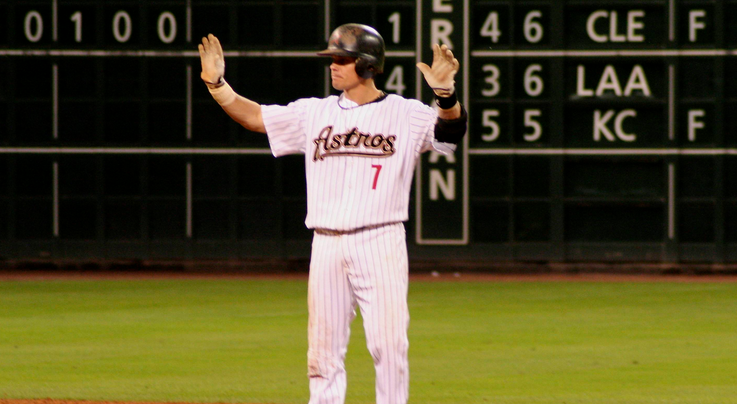 Craig Biggio is an Astros legend. Is he also about to be an Astros manager?

Houston fired skipper Bo Porter last week and the latest speculation is that Biggio, who compiled 3060 hits during his 20-year career playing only for the Astros, is the leading candidate to replace him.

Biggio is currently the baseball coach at St. Thomas High School in Houston Texas. The 48-year old led the squad, which included two of his sons, to back-to-back Texas Association of Private and Parochial Schools Class 5A state titles in 2010 and 2011. He also holds a position in the Astros front office as Special Assistant to the General Manager.

Although Biggio has no professional managerial experience, that is no longer the barrier it once was. Current managers Mike Matheny, Brad Ausmus and Robin Ventura had no managerial experience at all when they took over, and, like Biggio, the Rockies Walt Weiss had just managed high school baseball.

According to Mets manager Terry Collins, who also skippered Biggio for three years in Houston during the ninties, the versatile second baseman was always destined to be a big league manager. “I always told him, ‘one of these days you’ll be managing in the big leagues,’” Collins said in an interview with Newsday. “And I hope you’ll get one of these guys like you on your team.”

The question now becomes should Biggio even take the Astros job if offered. The conventional wisdom is that Houston’s meddlesome sabermetrics-obsessed (not that there’s anything wrong with that) front office more-or-less set up the old school Porter to fail.

Then there is the cautionary tale of long-time Tiger Alan Trammell. Like Biggio, he had a fantastic 20 year career with just one team. (And, like Biggio, he should be in the Hall of Fame but isn’t.) Detroit hired Trammell, who had no managerial experience, in 2003. Burdened with a decrepit roster, Trammell went 186-300 over his three years in Detroit and hasn’t had another managerial job since the Tigers fired him

Houston has been easily the worst team in baseball over the last five years. But they do feature some interesting young players, most notable Jose Altuve and George Springer, and should be better going forward.

However, there is no guarantee they’ll be that much better, and a manager without any professional managerial experience — and one who was also a perennial All-Star as a player — may not be the best choice to guide the least experienced team in the league through their extended growing pains.

Nevertheless, it would be difficult for Biggio to turn the job down if offered. And if he does take the job, expect the front office to give more rope to a local legend than they extended to Porter.