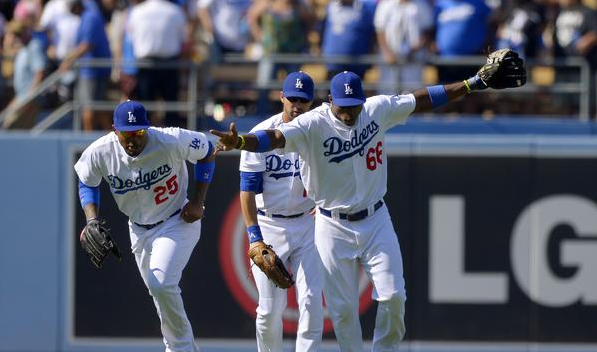 The first week of fantasy baseball is in the books. Here are some of the story lines heading into week 2:

Dodger’s outfield situation
Los Angeles came into the 2014 with four potentially fantasy relevant outfielders. An unsettled situation for anyone who owns Matt Kemp, Andre Ethier, Carl Crawford or Yasiel Puig. (Not to mention an unsettled situation for their real life manager Don Mattingly.) It’s not that tricky against left-handed starters — either Ethier or Crawford will sit. But it’s what Mattingly does against righties which will determine the value of all four going forward.

So far we haven’t received a lot of insight into that, as Puig’s injured thumb kept him out of Sunday night’s game making Mattingly’s lineup card decision against Giants’ righty Matt Cain easy. Puig is listed as day-to-day, but we expect Kemp — who hit two homers Sunday — not Puig, to be the one outfielder Mattingly pencils in every day.

Now that’s assuming Kemp, just off the DL, can stay healthy. A big, big assumption, as anyone who has owned Kemp over the last couple years knows. The Dodgers are just one injury away from having a more conventional outfield situation, but for now it’s going to cause fantasy owners some stress.

Ryan Braun’s thumb
Puig isn’t the only slugger with thumb problems. Brewers outfielder Ryan Braun is experiencing numbness in his most important digit. It’s an injury that plagued Braun last year and may have been behind his hasty acceptance of the 65 game suspension MLB hit him with for his association with the Biogensis Clinic. Surgery doesn’t appear to be an option, so Braun will ride it out. It apparently effects his throwing more than his hitting, and Braun DH-ed Friday in Boston and then sat out Saturday’s game. But he was back in right field on Sunday, picking up his second and third hits of the year. (And stealing his second base.) Brewer’s GM Doug Melvin has said the team isn’t “overly concerned” about the lingering injury.  While Braun is off to a slow start, he did absolutely rake in spring training. Braun’s owners should monitor the situation, but no reason to freak out just yet. 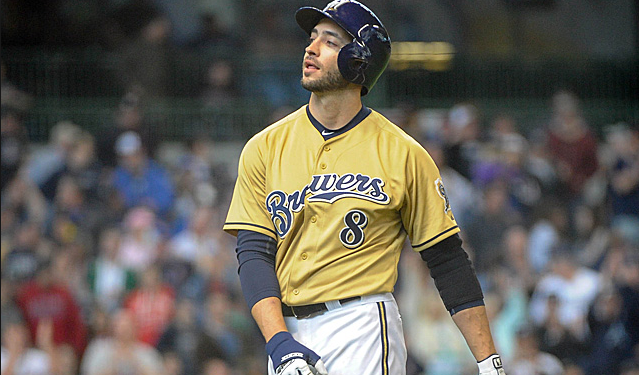 Closer carousal
Week one closer surprises include Francisco Rodriguez over a (healthy) Jim Henderson in Milwaukee, Sergio Santos over an (injured) Casey Janssen in Toronto and Jose Valverde over an (out for the season) Bobby Parnell in New York.

The White Sox‘s situation could be influx: Matt Lindstrom is currently closing, and assumed ninth inning man Nate Jones was ineffective and then disabled. But Lindstom hasn’t exactly grabbed the bull by the horns, giving up runs in two of his three appearances. Given Lindstom’s lack of pedigree, keep your eye on Daniel Webb, who has gotten past “closer of the future” buzz.

The Cubs‘ incumbent closer Jose Veras is also struggling. After blowing his first save opportunity on Wednesday, he was awful in a ninth inning non-save role Sunday — walking four. Pedro Strop bailed him out last night, and had earned a save earlier in the week when Veras wasn’t available. Stop might be worth a speculative pickup if you need saves.

In Cincinnati, Jonathan Broxton should return this week and will hold down the closer role until Aroldis Chapman recovers from his scary facial injuries.

Other players to grab if they are available in your league:
Scott Kazmir, Angel Pagan, Ben Revere, Nathan Eovaldi.