The Dodgers activated Hanley Ramirez from the disabled list yesterday, and he went 0-4 in the team’s loss to the Mets. The 30-year old shortstop had started the season slowly, but was slashing .315/.408/.462 in the two month prior to the right oblique strain that only kept him out the minimum 15 days.

“It’d be good to have him back in there, honestly,” Dodgers manger Don Mattingly said before the game. “It changes the lineup from the standpoint of the length of it and the number of guys you have to go through just to navigate it. He’s a dangerous guy in that lineup, so it’s good to have him back.”

While Ramirez had been batting three in the Dodgers lineup before hitting the DL, Mattingly will ease him back into action by spotting him in the five spot for the time being. That should have no effect on his fantasy value.

Cubs shortstop Starlin Castro has been out since August 19th for a much sadder reason; he was back home in the Domincan Republic dealing with the death of a relative and three close friends in a car accident. He’s set to return from the bereavement list Tuesday and his fantasy owners hope Castro, who been OPSing .912 in August, picks up right where he left off.

Castro has had himself a nice bounce back season after struggling mighty in 2013. He’s the seventh ranked fantasy shortstop so far in 2013, topping Ramirez, among others. Not that many would have predicated that.

Sean Doolittle hits the DL strained right intercostal
A’s reliever Sean Doolittle — he of the .705 WHIP and 13.O Ks per 9 — was having himself quite a season. So much so that Oakland ignored his left-handedness and made him closer when Jim Johnson imploded. Now Bob Melvin and company are going to have to find themselves another closer, at least for the next 15 days.

Luke Gregerson is the best bet for that, spot and is worth an add in all leagues. Ryan Cook did close for the As for a good chunk of 2012 and, after an injured filled first half of the season, has looked quite closer-like. So don’t be too surprised if it’s a ninth inning time share, or even if Cook is given the bulk of the work

Gregory Polanco sent down
The Pirates probably did Gregory Polanco‘s fantasy owners a favor by sending him down to Triple-A yesterday. (And recalling Jose Tabata.) On the one hand, the uber-prospect’s power/speed combo makes him hard to rest. But, on the other hand, he was only hitting .222 with two homers over the past month. The 22-year old will be back in six days, when the rosters expand. And he could well turn it around, as the Cardinals equally shiny prospect  Oscar Taveras has been doing over the last couple weeks. But exploring other stolen base options in the meantime would be advisable. 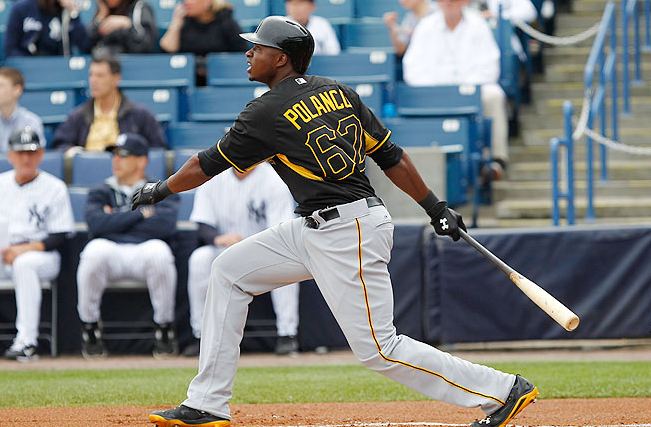