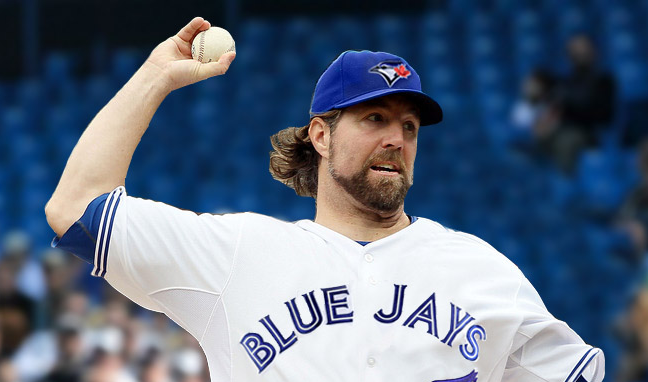 On this Memorial Day, lets remember all those fantasy stars who could once win leagues, but now get guffaws when you try to sneak them into trades as throw-ins. Ryan Howard, Dan Uggla, B.J. Upton, Tim Lincecum, Michael Bourn, Rickie Weeks, R.A. Dickey. You were all once great, but are now dead to the prudent fantasy owner. (Kidding aside, it’s important to remember on this day of beer, barbecues and baseball all of the brave Americans who died preserving the freedom to really enjoy all of these wonderful things.)

But since they are not actually dead, a couple Upton home runs or a game in which Lincecum can find the strike zone tempts fantasy owners to bet on these fallen stars returning to at least some of their past glory. It is usually best to avoid this temptation.

However, we are starting to see green shoots from one name on the list — Dickey — that shouldn’t necessarily be ignored. The Blue Jay is 4-1 with a 2.52 ERA, 1.07 WHIP and 30 strikeouts in his last six starts. Given how streaky knuckleballers are, this could be the start of something big for Dickey. We’d like to see a better strikeout rate — Dickey was K-ing about a batter an inning during his 2012 Cy Young season — but, overall, the 39-year old is inching back into the circle of trust.

Nolan Arenado Hits the DL
One of fantasy’s thinnest postion got a bit thinner today when the Rockies placed third baseman Nolan Arenado on the 15-day DL, yet another victim of the baseball’s 2014 thumb injury epidemic. He broke his on a slide and will be out four to six weeks, which is too bad because he’s been really good. If this was three days ago, we’d recommend picking up Phillies third-sacker Cody Asche, a 23-year old who had been hitting .317 with three homers and 12 RBIs in the month of May. But, alas, he just tweaked his hammy and has been placed on the DL, too. It seems like this will only be a two-week deal. If it’s any longer the Phillies might call up top prospect Maikel Franco, and he’s a guy you should certainly monitor.

As for third baseman to replace Arenado with that are actually playing Major League baseball … Chase Headley, who has two homers and 10 RBIs in the 14 games since he returned from injury is still available in over 50 percent of Yahoo! leagues. Matt Domínguez has seven homers, a non-terrible .254 batting average and is available in just about all of them.

Closer Carousal
On Sunday, Jenrry Mejía pitched the top of the ninth of a tie game in the first game of the Mets doubleheader against the Diamondbacks (he lost it on an unearned run) and then saved the second game. He’s clearly the closer in New York, and has the potential to be a good one.

Thanks to Tommy Hunter‘s strained left groin, Zach Britton has definitely grabbed the Orioles ninth inning role he had probably already won. We like a better strikeout rates than Britton’s 6.1 per nine innings from our closers, but his .68 ERA is hard to ignore.

No such good options in White Sox-land after closer Matt Lindstrom hit the DL. Ronald Belisario picked up two sloppy saves this week and then blow a three-run lead in his third chance. Daniel Webb, who has closer stuff, lurks, but has been allowing a lot of base-runners and has struggled in high-leverage situations.  Unless you really, really need saves, we’d let the White Sox situation breathe for a week or two.