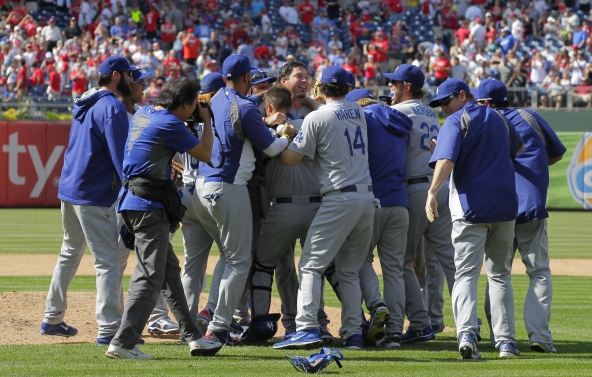 During the celebration for Josh Beckett‘s no-hitter Sunday, Dodgers catcher A.J. Ellis rolled his ankle and has been placed on the disabled list. Ellis wasn’t behind the plate for the gem and actually hurt himself tripping over his backup Drew Butera‘s mask, which had been discarded on the pitchers’ mound.

If this was a week ago, the Dodgers could have called up Miguel Olivo, a catcher with 13 years of Big League experience, from Triple-A. However, they had to release him from the organization Friday after he bit off teammate Alex Guerrero’s ear in a dugout brawl.

But Ellis’s — or Guerrero’s — wasn’t even the strangest baseball injury of the week. That would belong to Phillies minor leaguer Jesse Biddle. Not only was Philadelphia no-hit by Beckett Sunday, but they saw their top pitching prospect miss his Double-A start because he got hit in the head with a hailstone! Below are baseball’s 25 strangest injuries.

25. Carlos Perez, Goofy Car Accident Perez’s promising career was partially derailed by injuries. The broken nose the hurler suffered in a car accident wasn’t really that big of a deal in a grand scheme of things. But the reason he crashed — he was trying to pass the team bus on the way to the stadium — does warrant mention.

24. Sammy Sosa, Sneezing “Sammy Sosa sneezing” has a pleasant ring to it. But it wasn’t so nice to the slugger when Sosa sneezed so hard he strained a ligament in his lower back. He needed an epidermal and was placed on the 15-day DL.

23. Kyle Farnsworth, Fan Excitable boy Farnsworth was furious after giving up six runs in a 2004 appearances. So he took a mighty kick at an electrical fan in the Wrigley Field tunnel. Thrusting any body part into the reach of a fan’s blade is horrible idea, but Farnsworth’s kick actually landed him on the DL with a sprained knee.

22. Kent Hrbek, Clubhouse Horseplay Kent “Buy a vowel” Hrbek missed the last ten days of the 1990 season after tweaking his back while wrestling with a clubhouse attendant. Hrbek was 6’4 and well over 200 pounds, so that was one brave clubhouse attendant.

21. Joel Zumaya, Guitar Hero Watching somebody play Guitar Hero can be funny; gamers get really into all the rock poses and gyrations it requires. Tigers relief pitcher Zumaya, who had the arm strength to throw a baseball over 100 MPH, put so much energy into his faux-musical efforts that he sidelined himself with a Guitar Hero-related wrist injury.

20. Mike Harkey, Cartwheel The Cubs pitcher was attempting to impress his teammates by turning a cartwheel in the outfield before a game. At 6-5 220 Harkey should have known to stay away from gymnastics, and the ensuing knee injury had him out for the year.

19. Moises Alou, Ran Over His Son With A Bicycle Alou first injured his knee falling off of a treadmill. His bizarrely bad luck continued the next year when he ran over his son during a bike ride. The boy was uninjured, but dad re-aggravated his knee and missed an entire season.

18. Bob Stanley, Taking Out The Trash The Red Sox reliever missed a couple games after he fell down the stairs while taking out the trash. On the bright side, he had quite the trump card in future martial arguments on who should take out the garbage.

17. Charlie Hough, Handshaking Hough once broke his pinky finger while shaking hands. Now that’s a baseball injury that would never happen in Japan.

16. Steve Foster, Late Night Television Stunt You probably don’t remember Steve Foster, but in 1993 the Reds reliever was on his way to being one of the better bullpen men in baseball. That is until he strained his shoulder throwing baseballs at milk bottles during a segment on “The Tonight Show With Jay Leno.” He spent a month on the DL and not long after that cartilage damage was discovered and required surgery. The-then 26-year-old would never pitch in the Big Leagues again.

15. Kendrys Morales, Walk Off Celebration Morales was understandably excited when he hit a rare walkoff grand slam for the Angels in 2010. So he decided to greet his celebrating teammates by jumping up and landing on homeplate, rather than just run through it. Bad idea. He came back to earth awkwardly, snapped his left leg. He would miss almost two entire seasons with the injury.

14. Oddibe McDowell, Buttering A Dinner Roll McDowell, a huge prospect coming out of college, never lived up to the hype as a big leaguer. He did once suffer an all-time great injury; Mcdowell sliced his hand during a team luncheon while trying to butter his roll.

13. Steve Sparks, Phone Book Mishap Knuckleballer Steve Sparks missed time after dislocating his shoulder while trying to tear a phone book in two. And what would motivate a young man to do such a thing? Apparently he saw a motivational speaker do it and wanted to see if he was up to the feat of strength. He wasn’t.

12. Jose Cardenal, Eyelids Stuck Shut Cardenal, who was quite the all-around character, missed a game in 1974 when he woke up to find his eyelids stuck shut. He claims he slept on them wrong.

11. Kevin Mitchell, Donut Of The Pastry Variety The 1989 National League MVP once missed time after straining his ribs vomiting. That would be the most bizarre injury for most players, but Mitchell also once arrived to spring training four days late because he was injured eating an overly microwaved doughnut. And that takes the cake.

10. Roger Craig, Bra Strap The bra has long befuddled the young male heavy petter. But Roger Craig was already old enough to the San Fransisco Giants manager when he severely cut himself removing a woman’s brassiere.

8. Ricky Henderson, Frostbite The Hall of Famer missed a game after suffering from frostbite … in August. It all sort of makes sense because it’s Rickey Henderson.

7. John Smoltz, Iron Burning yourself with an iron isn’t that unusual of an injury — those things are hot. However, Smoltz was injured because he burned himself while trying to iron the shirt he was still wearing. He later called the 1990 newspaper report which documented the bizarre incident “the most false thing I’ve ever heard.” The Atlanta Journal-Constitution article is still available online and it quotes Smoltz as saying of injury, “I couldn’t believe it. I’ve done it five or six times and never had that happen.” Somebody needs to get the bottom of this scalding mystery.

6. Bret Barberie, Chili Sauce In The Eye Bret Barberie got the first hit in Florida Marlins’ history. He is also the first baseball player to ever miss a start because he got chili sauce in his eye. He says it was an accident, which makes us feel a bit better about Bret Barberie. We’re also surprised that in our age of sriracha there hasn’t been another hot sauce-related baseball injury.

5. Larry Anderson and Bob Feller, Jacuzzi Maladies Anderson strained his rib while getting out of his Jacuzzi. Feller was using the relaxing properties of a more primitive Jacuzzi to work his sore back and ended up getting burned by a hose that got loose. Hot tubbers beware.

4. Randy Veras, pounding on hotel wall During a road trip, the couple in the next hotel room over from Randy Veras’s were a little, um, randy. The relief pitcher injured himself pounding on the wall in an attempt to get them to tone it down.

3. Wade Boggs, Cowboy boots Hitting machine Wade Boggs was sidelined for about a week in 1986 after he bruised his ribs while trying to take off his cowboy boots. As anyone who has ever worn cowboy boots can attest to, taking them on and off can be a bit tricky. But since this is Boggs we do have to wonder if alcohol was involved. The Hall of Famer was flirting with the elusive .400 mark at the time of the injury, but the pain stuck with him for a while and he ended up hitting .357.

2. Vince Coleman, Automatic Tarp Machine The Cardinals speedster missed the rest of the 1985 World Series with a chipped bone in his knee after somehow managing to get run over by the tarp machine. Apparently, he was so into his pregame workout he didn’t notice the electrical field-covering device had been activated. 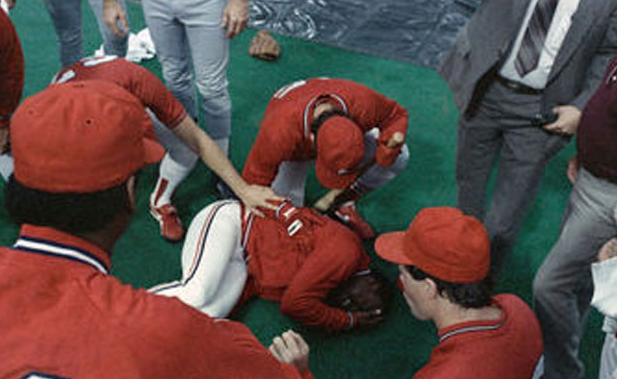 1. Glenallen Hill Imaginary Spiders Hill suffered from a very acute cause of Arachnophobia. His was so bad that he would often wake up in the middle of the night screaming about the eight-legged bugs. During one particularly scary dream he jumped out of bed, landing on a glass table, and then fell down the stairs. He sustained numerous cuts and bruises and was placed on the 15-day DL. We’re thinking his nickname of Spiderman just added insult to injury.