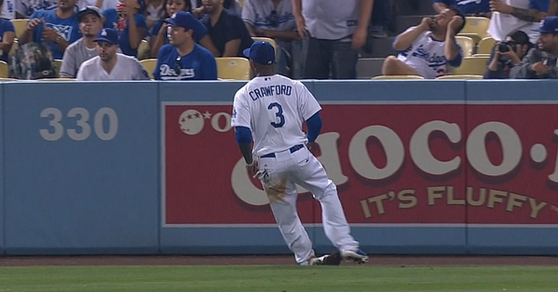 Last night during the Dodgers‘ 6-3 win over Cincinnati Carl Crawford‘s ankle did something ankles are not supposed to do. (As you can see in the picture above.) The gruesome sprain is expected to land the left fielder on the 15-day DL.

Crawford was brought to the post-game press conference in a wheelchair and is expect him to be out a lot longer than 15 days. But as bad as it looked and looks for Crawford, there have been a some even more horrific injuries in MLB history. Check out ten of the more notorious ones below, if you dare, and see if the unlucky players were able to recover from their cringe-inducing mishaps.

Tony Conigliaro Gets Beaned In The Face. 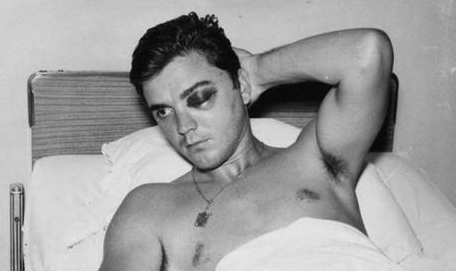 In 1967, Tony Conigliaro reached 100 home runs at a younger age than anyone in American League history. Just weeks after doing so he was struck in the face by a Jack Hamilton fastball and suffered a linear fracture of the left cheekbone, a dislocated jaw and severe damage to his left retina. He would miss the next year and half. He was almost as good as before in 1969 and 1970, but by the ’71 season the vision in his left eye had completely deteriorated, and that was basically it for his career.

Jason Kendall Dislocates Ankle On The Base 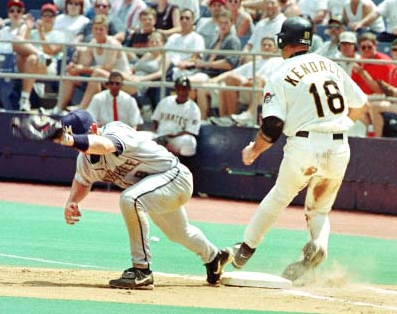 Kendall was hitting .332 with an amazing-for-a-catcher 22 steals on July 4th of the 1999 season when disaster struck. And it was his very speed that did him in — Kendall was trying to beat out a bunt when he landed on the base awkwardly and dislocated his ankle. He was back for the 2000 season and just about as good and then played ten more years.

Bryce Florie Gets Annilated By A Line DrivePitchers are always vulnerable to line drives back up the middle and many have been struck in sensitive places. But few have been as bloodied as Red Sox reliever Bryce Florie, who took a Ryan Thompson liner off the face. The September of 2000 incident broke multiple bones in his face and caused severe damage to his eye socket. He was ineffective when he returned in 2001, and wouldn’t pitch in the majors after that.

Nationals first baseman Nick Johnson collided with left fielder Austin Kearns while pursuing a fly ball in a 2006 game against the Mets, badly breaking his femur in the process. Johnson, who has having his best year and seemed to be headed for stardom, missed almost two years and never recovered his power.

Ray Fosse Gets Pete Rosed
Most players take it easy in All-Star games. But not Pete Rose. Charlie Hustle was going full-tilt in the 1970 All-Star game and when he barreled over American League catcher Ray Fosse with what was the game-winning run. Fosse, then 23, suffered a separated shoulder.  Although he played for another decade he was never the same.

The Brewers outfielder was lunging back to third base when cleats caught the bag and the rest of him kept going. He sustained a dislocated ankle and ligament damage and was out for the rest of the 2002 season. He came back in 2003, no worse for wear, and made his first All-Star team.

Dickie Thon‘s Career Is Altered By a Bean Ball. 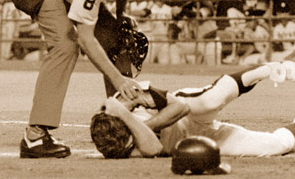 In 1984, Dickie Thon was one of the most promising young players in the game. A unintentional beanball from Mike Torrez  broke Thon’s orbital bone and partially blinded him. Thon recovered his vision enough to return a season-and-a-half later, however problems with his depth perception never allowed him to reach his potential.

Buster Posey Gets HousedIt was every Giants fan worst nightmare when Scott Cousins bowled their young stud catcher over on a play at the plate in 2011. Posey’s body went back but his legs stayed planted for a moment too long, and the 2010 Rookie of the Year and postseason hero sustained a broken fibula and torn ligaments in his ankle. He would miss the rest of the season. To say he came back strong is an understatement; he won the 2012 National League MVP and led the Giants to another world title. The Cousins/Posey collision was the impetus for MLB’s rule change which now bans catchers from blocking the plate.

Steve Yeager Takes Nine Shards Of Wood In His Throat
Catcher Yeager was in the on-duck circle when teammate Bill Russell’s bat shattered and nine pieces of the exploding wood ended up in Yeager’s neck, including one deep in his esophagus. He was rushed to the hospital and after an hour-and-a-half of surgery he was in the clear. For his return to action later in the 1976 season Dodgers trainer Bill Buhler had developed a neck protector for Yeager to wear when he caught. The device caught on, and now is used by all backstops. Yeager would go on to play for another decade.

Dave Dravecky’s Arm Snaps On A PitchIn 1988, Giants pitcher Dave Dravecky was diagnosed with cancer in his pitching arm and had half of his deltoid muscle removed and his humerus bone frozen. Doctors didn’t want him to pitch again until 1990, but he made his comeback the next season. In his second big league start of the year his arm snapped with a sound so loud it could be heard in all corners of the stadium. Although his season was over, his bad luck continued; he broke his arm again while celebrating a pennant win with his teammates. Doctors than found that his cancer had returned, and eventually his arm was amputated at the shoulder.