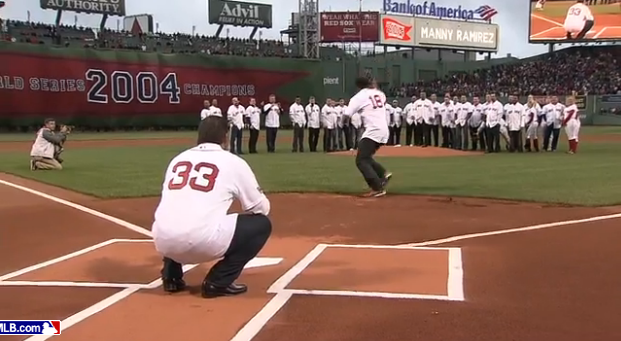 It may be the funniest play in baseball history. During a Boston/Baltimore game in 2004, Orioles DH David Newhan drove a ball to deep center off of Red Sox ace Pedro Martinez. Center fielder Johnny Damon tried to run down the drive, however it bounced high off the wall and by the time he was able to corral it Newhan was rounding second.

Now Damon, for all of his good attributes, did not have much of an arm. But the throw he unleashed on that day had enough juice on it to reach the cutoff man and limit Newhan to a triple. Then, out of nowhere, left fielder Manny Ramirez enters the frame. He dives for the ball, just out of Damon’s hand, catching it while tumbling to the ground. He gets up quickly and fires it to the traditional cutoff man, second baseman Mark Bellhorn. However, the superfluous step allowed Newhan to round third and snag an inside-the-park home run. It was the birth of the phrase “Manny Being Manny” because there was just no other way to describe what Ramirez was thinking.

Ramirez and Damon have joked about the play over the years, including when they both signed with the Tampa Bay Rays before the 2011 season. Yesterday, on the occasion of the ten year anniversary of the 2004 Red Sox team that finally broke Boston’s almost century long World Series curse, Damon finally got to pay Ramirez back.

Just about all the players from the famous squad were back in Fenway for the ceremony. Jason Vartiek, Martinez, “idiot” Kevin Millar, Mike Timlin, Keith Foulke, Orlando Cabrera, Trot Nixon, Gabe Kapler and David Ortiz, who still plays for the club. Curt Schilling, in his first public appearance since his cancer diagnosis, was there as well. But it was Rameriz, who’s had an acrimonious relationship with the Red Sox since he forced a trade to the Dodgers in 2008, who was selected to throw out the first pitch.

That’s when Damon struck, diving in front of the ball with an exaggerated tumble and recreating the hilarious cutoff of a decade earlier.

But it wasn’t just fun and jokes for Ramirez, who recently signed with the Cubs to help coach their Triple-A squad and get the occasional at-bats. The forty-one year old, who was sporting a fauxhawk, also wanted to use the opportunity to apologize for some of his poor behavior during his time on the Red Sox.

“I realize that I behaved bad in Boston,” Ramirez said. “The fans were great. I also played great when I was here, but I realized I behaved bad. I apologize for that. I’m a new man.”

Ramirez, who says he’s found religion and now regularly attends church,apologized specifically to the team’s traveling secretary Jack McCormick, who Ramirez knocked to the ground in 2008 during a dispute over tickets.

McCormick, 64 at the time of the incident, accepted the apology and added he had been waiting six years for Ramirez to say those words.

The incident with McCormick, various PED suspensions, and a domestic abuse arrest in 2011 were the downside of “Manny being Manny. But most of it was pretty fun. Check out some of the highlights of Manny Ramirez’s long, strange baseball trip below.