Which Pitcher Has The Fastest Fastball Of All-Time? 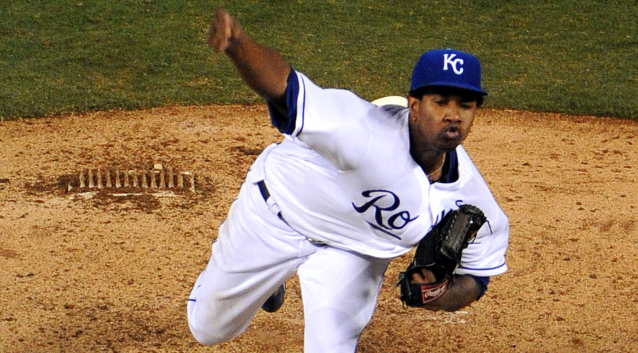 Royals rookie starting pitcher Yordano Ventura has been getting a lot of press lately for hitting almost 103 MPH on the radar gun. These days radar measurements are part of the PITCHf/x system, which tracks every major league pitch. PITCHf/x debuted in the 2006 MLB playoffs; before that MPH measurements came from traditional radar guns, which are probably less accurate. With that in mind, here are the 15 fastest pitches of all-time.

15. Justin Verlander, 2007, 102 radar
Although this measurement came after 2006, Verlander’s speed of 102 was recorded on the Fox Sports Network radar gun, not PITCHf/x. We’ll still stick him on the list because he has topped 100 on multiple occasions. Anyway, it seems to have impressed Kate Upton.

14. Randy Johnson, 2004, 102.2 radar
The Big Unit popped off this pitch when he was a 40-year-old. Whenever we think of a Johnson fastball we remember John Kruk at the 1993 All-Star game, heart pounding and feeling lucky to be alive.

13. Steve Dalkowski, 1958, 102.5 artillery radar
Legend has it, Dalkowski could hit 120. But since he never reached the majors radar guns were rarely available at his games. The Nuke LaRosh character in the movie “Bull Durham” is based on Dalkowski, who had a 5.38 ERA for his minor league career.

12. Jonathan Broxton 102.6, 2009 PITCHf/x
Broxton certainly looks like a guy who can throw a baseball hard.

10. Bruce Rondon 102.8, 2013 PITCHf/x
The 23-year-old recently had Tommy John surgery and will miss the 2014 season. It’s unclear how much the procedure effects velocity — especially in younger pitchers — so it will be interesting to see how hard Rondon can throw in 2015.

8. Goose Goosage 103, 1978 radar
Goosage played in an era in which relief pitchers were required to have awesome facial hair. And his fastball was even more impressive than his ‘stache.

7. Mark Wohlers 103, 1995 radar
Wohlers was the much less obnoxious of the two hard-throwing closers the Braves rolled out during their run of 14 straight division titles.

6. Henry Rodriguez 103.2, 2010 PITCHf/x
Rodriguez’s lack of control (career walk rate of 6.2 BB per nine innings) makes him a fairly horrifying pitcher to stand in against.

5. Neftali Perez 103.4, 2011 PITCHf/x
After missing some of 2012 and almost all of 2013 with Tommy John surgery, the Rangers hurler was just shutdown from his minor league rehab assignment.

4. Joel Zumaya 104.8, 2006 PITCHf/x
Zumaya’s career was also greatly impacted by injuries; he was just 25 when he last pitched in 2010, and officially retired earlier this year.

3. Arodolis Chapman 105.1 2011, PITCHf/x
The muscular Cuban Missile has topped 102 on three other occasions. He’s also on the disabled list, but his injury was of the (scary) facial variety.

2. Bob Feller 107.6, 1946, artillery radar
The radar actually had Feller at 98.6 MPH. But the reading was taken when the pitch crossed the plate, whereas more modern measures are done at 50 feet. Feller’s fifty feet equivalent (FFE) is calculated to be 107.6. For comparison sake, Chapman’s 105.1 fastball crossed the plate at 96.5.