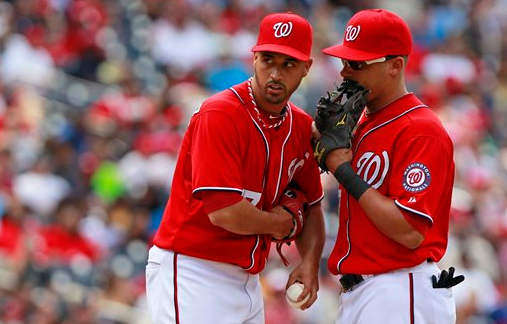 During Sunday’s Washington Nationals loss to the Oakland A’s starting pitcher Gio Gonzalez got into it with shortstop Ian Desmond after catcher Jose Lobaton and third baseman Anthony Rendon allowed a pop up to drop between them.

Although he reportedly had to be restrained, the lefty dutifully adhered to rule one of clubhouse fight club:

“Nothing happened,” Gonzalez said. “I think I missed that,” Desmond added.

Other clubhouse dust ups have been a bit harder to deny. Here are the six notorious teammate fights with the photographic evidence when available:

Carlos Zambrano vs. Michael Barrett
Carlos Zambrano was an enormously talented pitcher who notched 100 wins before his 29th birthday. He was also a troubled soul known for his confrontations with umpires, managers and opponents. Because of his volatile personality he probably wasn’t the easiest guy to catch, and after giving up five runs in an inning during a 2007 start he and his backstop with the Cubs Michael Barrett fought in the dugout and then the clubhouse. Barrett — who was hospitalized and received stitches on his lip —  was no saint either, having previously had altercations with opponents Roy Oswalt and A.J Pierzynksi. Both combatants are now out of the Major Leagues. Zambrano was last heard from in January when he was involved in what-else-but-a brawl during a game in his native Valenzuela.

Torii Hunter vs. Albert Pujols
As the much-heralded Angels season fell apart in late 2012, starter CJ Wilson suffered a meltdown in which he gave up seven runs in 4.2 innings. He exasperated his poor pitching by doing a lot of chirping in the dugout; including hitting advice to the Halos struggling batters. This didn’t sit well with Torii Hunter, who told CJ to zip it. After the game veteran reliever LaTroy Hawkins called a players-only meeting which Albert Pujols objected to, saying the manager and coaches should also be involved. In doing so he admonished Wilson and Hunter for fighting, not knowing that they had already made up. This didn’t sit well with Hunter, who accused Pujols of being a bad teammate and a not-so clutch hitter. The two had to be separated twice. Baseball clubhouse politics can be complicated, huh? This wasn’t the first time Hunter had gone after a teammate physically. In Minnesota he managed to punch Justin Morneau while giving him a hitting instruction. While that incident actually bonded the two — maybe because Hunter’s tough love helped Morneau become a MVP — relations between Pujols and Hunter remained icy and 2012 would be Hunter’s last year with the Angels.

Manny Rameriz vs Kevin Youkilis
Given all the wackiness of Manny Rameriz’s impressive and entertaining career it makes sense that he would square off against least one teammate. Kevin Youkilis was his huckleberry.  In 2008 cameras caught Manny taking a swipe at the third baseman in the Red Sox dugout. The funny thing was it was probably Youkilis’s behavior that caused the dustup. Youk’s habit of throwing bats and other objects every time he made an out was not popular with the rest of the Red Sox because it make him look selfish. (Boston ended up winning that particular game 7-1.) However, there is also an alternate theory that suggests the Ramirez and Youkilis confrontation steamed from Manny’s dugout eating habits. This seems unlikely, but food (fried chicken and beer) would play into another Red Sox controversy a few years later. And we can only imagine what weird and terrifying things Rameriz would do with a ballpark frank. 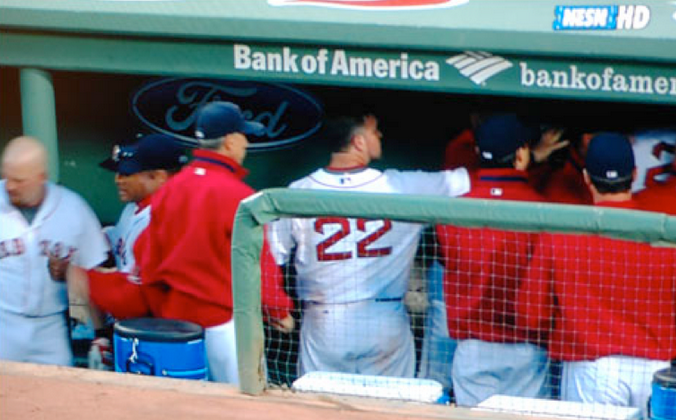 Barry Bonds vs. Jeff Kent
Barry Bonds and Jeff Kent are two of baseball’s most notorious jerks. They also made for just about as vicious of a three-four batting combo the National League has ever seen when they played together in San Francisco. While in a perfectly evil world the duo would have been able to combine their unpleasant personality to suck all that is good out of the game, in the actual more-complicated world they hated each other just as much as everybody else hated them. During a game in 2002 the two had a widely circulated on-camera shoving match. According to Kent those near-fisticuffs were nothing, and the second baseman conceded that they two sluggers ahd squared off in private at least a half-dozen times before that. 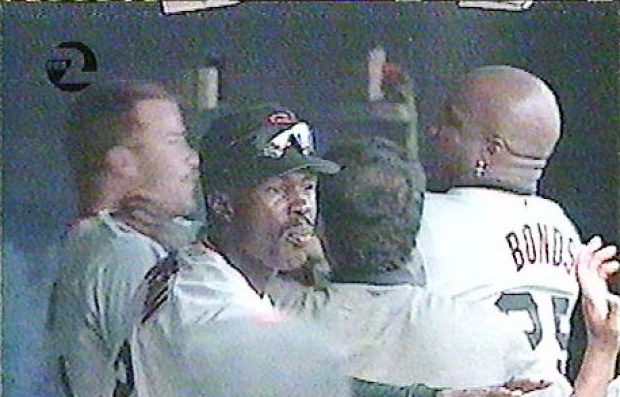 Elmer Flick vs. Nap Lajoie
Although they can both make Hall of Fame claims, Kent’s borderline stats and jerkiness and Bonds’ PED problems have so far kept them each out of Cooperstown. That would make Elmer Flick and Nap Lajoie the only known Hall of Fame teammates to have fought. Some say the pair just didn’t like each other. Others say it was a brawl over fashion; Flick was a natty dresser and Lajoie was known for his slovenly appearance. Apparently Lajoie didn’t like Flick constantly pointing this out and finally socked him one in the mouth. Bad move for Lajoie, who broke his hand and would miss five weeks. Bad move for the Phillies, who would fall out of first place and lose out on the 1900 pennant without their superstar second baseman.

Reggie Jackson vs. Billy Martin
Although technically not teammates — Martin was Jackson manager — the duo is probably baseball foremost example of friendly fire combatants. Martin was a pugnacious fellow, brawling with everyone from Tommy Lasorda to a marshmallow salesman during his volatile 40 years in baseball. Jackson wasn’t much of a fighter, but had an ego as prodigious as his moonshot home runs. The pair got along like oil and water and it came to a head in July of 1977 when Jackson’s lack of outfield hustle turned a single into a double. Martin confronted his slugger nose-to-nose in the dugout and twice tried to fight him. It happened to be a national televised game, and, obviously, the New York tabloids went nuts about the battle that had been brewing since Jackson arrived for the 1977 season. The fight didn’t affect the Yankees fortunes in ’77; they won the World Series. But his problems with Jackson would lead to Martin being dismissed of his duties midway through the 1978 season. That wouldn’t be the last Jackson saw of Martin, however; the manager was famously rehired in the middle of the 1979 season, before being fired and rehired by Yankee owner George Steinbrenner three more times. 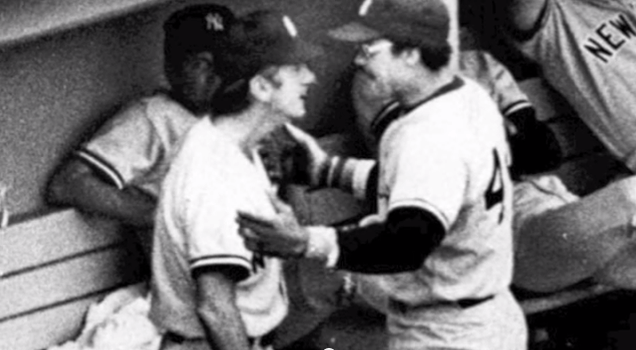