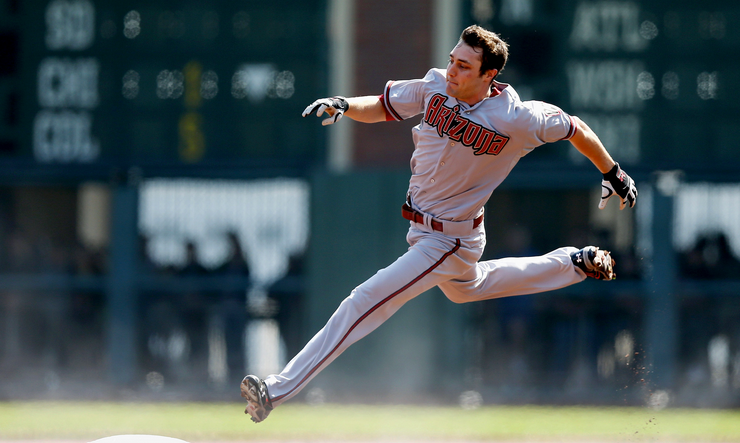 Thanks to his legs, Arizona center fielder A.J. Pollock has had the potential for fantasy relevance since the Snakes made him a starter last year. The former first round pick stole 36 bases in his one full minor league season and has just enough pop in his bat that he shouldn’t hurt you too much in the other categories, especially in the thin air and big outfield of Phoenix.

But Pollock’s speed didn’t manifest itself last year; he only stole 12 bases with otherwise solid rookie numbers. Nor was he running early this year; he had zero stolen bases on May 5 and had just missed a handful of games with a groin injury.

Now he has five, after running wild on the White Sox over the weekend. He also has three home runs, ten other extra base hits and a .278 average for the year. His RBI and run totals (7 and 14 respectively) are not good, but they should improve as he continues to see more time as the lead-off hitter and the Diamondbacks struggling offense regresses to the mean. Pollock is owned in less than ten percent of Yahoo! leagues, but is probably a better overall outfield speed play than Michael Bourn (43 percent) and should comparable to Ben Revere (62 percent) and Brett Gardner (73 percent.)

Injury news
Large Yankee pitcher C.C. Sabathia hit the 15-day DL Sunday with knee inflammation, a move that temporarily puts his fantasy owners out of their misery. The left-hander is actually posting a career high in strikeouts per nine innings. However, his other stats are downright awful and since he was pretty lousy in 2013 you really can’t have a lot confidence in him moving forward. If you have a DL spot available, may as well stash. If not he feels pretty drop-able.

Aramis Ramirez, who has been slumping after a hot start, looks to be hitting the 15-day DL today or tomorrow with a hamstring. The Brewers are holding the announcement until they are sure Ryan Braun can be activated from the DL Tuesday, which is the expectation.

Matt Wieters, who is finally hitting like Matt Wieters was supposed to hit, was placed on the 15-day DL. Arm surgery is a possibility and could cost him the season. In a corresponding move the O’s welcomed back Chris Davis from his DL stint, so all is not awful in birdland.

A pair of slugging first baseman, Brandon Belt and Adam LaRoche, also hit the DL this weekend. LaRoche, who has a quad strain, hopes to be back in the minimum. Belt, who suffered a broken thumb, will miss about a month and a half in this the year of the thumb injury.

Closer Carousal
Casey Janssen returns this week and will assume the ninth inning duties for the Blue Jays. His isn’t the most sexy name in closers, but his numbers in 2012 and 2013 put him pretty close to the top-tier. Grab him immediately on the off-chance he’s still available.

Aroldis Chapman has a sexy name and a sexy fastball and he used it to strike out the side in his first game back from a brutally unsexy facial injury. If he’s available in your league you need to find another league.

As predicated by exactly everybody, John Axford has lost the closers gig in Cleveland. Manager Terry Francona is going with the dreaded closer-by-committee, which will at least include Cody Allen and Bryan Shaw. To make things even more muddled the skipper said he hopes Axford will be able to win the job back.

While this is all a recipe for fantasy frustration, Allen and Shaw are almost good enough to own as middle relief pitchers, so there’s no reason not to take a shot at one or both of them if you have space and need some saves.