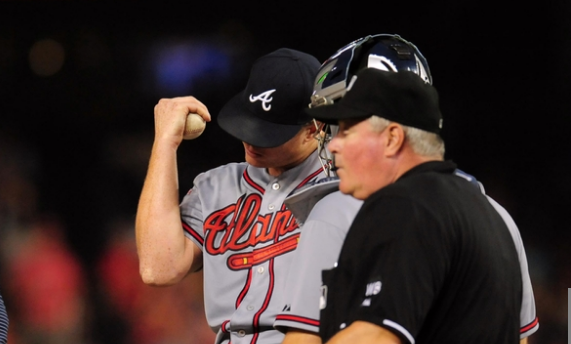 After missing most of 2013 with Tommy John Surgery, Atlanta Braves right hander Gavin Floyd was enjoying the best season of his career. And last night, the 31-year old was enjoying his best start of the season, shutting out Washington through six innings with six strikeouts.

Then disaster struck.  Facing Jayson Werth to begin the bottom of the seventh Floyd threw a curve ball and immediately knew something wasn’t right

“It was fine until that last pitch,” Floyd said. “I felt a pop. And it wasn’t painful, at least.”

Floyd’s elbow began to swell and it wasn’t long before everybody could see there was something seriously wrong. 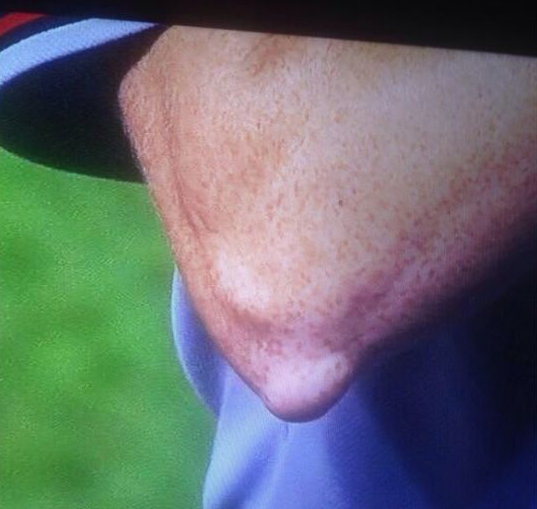 It turns out that’s what a fractured olecranon looks like. The olecranon is the tip of the bone that sticks out behind the elbow. Fire-balling Tigers reliever Joel Zumaya suffered the same injury in 2010 and hasn’t pitched since.

Floyd will be examined by team doctors today. Braves manager Fredi Gonzalez said he thought his pitcher would be “OK” long-term and added that he didn’t think the injury had anything to do with his Tommy John surgery.  Gonzalez is not a medical doctor, so unless he happened to stay the night at a popular mid-market hotel chain take that with a grain of salt.

What doesn’t seem to be in doubt is that Floyd will miss the rest of the season. It’s been a brutal year for the Braves in terms of starting pitchers, with Kris Medlan and Brandon Beachy both going down in spring training and then being ruled out for 2014 with Tommy John surgery. Despite these significant setbacks the Braves got off to a 17-7 start. However they’ve been 20-28 since then and are now a 1/2 game behind the Washington Nationals in the bunched up National League East.

Although you can’t really blame pitching for the Braves recent problems and, if anything, all of the injuries have displayed Atlanta’s organizational depth at the position. To replace Floyd the team will call up from Triple-A Alex Wood, who performed quite well as a fill-in starter in April. The Braves decision to send the talented young left-hander down to the minors ten days ago in order to keep him stretched out now seems prescient.

As for Floyd, he was understandably feeling down.

“I felt like I was getting better and better, so it’s definitely disappointing,” Floyd said. “Definitely not what I envisioned to happen. I haven’t had any pain since the surgery.

Check out baseball’s ten most gruesome injuries here, if you dare.