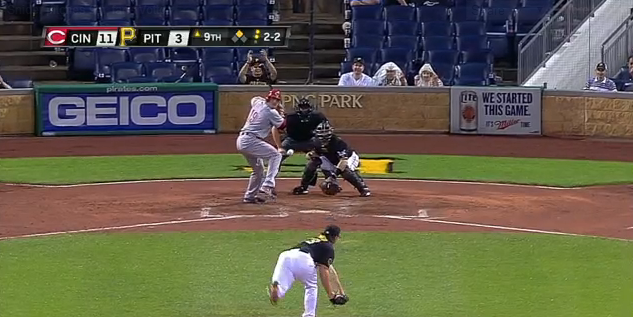 There are all sorts of neat and unique things about Joey Votto‘s game. The 2010 National League MVP went through that entire season without hitting an infield pop up. During his Major League career he’s only once pulled a foul ball into the stands. He flirted with a .500 OBP in 2012 and walked 135 times in 2013.

Votto pulled perhaps his most unusual accomplishment last night, and it wasn’t so good. In the ninth inning of the Reds 11-4 win over the Pirates Votto struck out. But it was who fanned him — Pittsburgh outfielder Travis Snider — which was unique. It was the first pitching appearances and first K of Snider’s career. As you can see below, it wasn’t exactly like Snider was bringing the heat.

Snider, who was a big-time prospect once-upon-a-time, has never lived up to his early billing and is only hitting .228 for the Bucos. Overall, his pitching wasn’t much better; he give up a hit, two walks and two runs in his inning of mop work.

So, no, we won’t be adding him to our list of the best pitching performances from position players, although a Votto scalp is a memorable one indeed.

As for the Reds first baseman, he reached base three times, including two of his signature walks. So he shouldn’t be too embarrassed. However, we do suspect he will be the subject of a little clubhouse ribbing today.