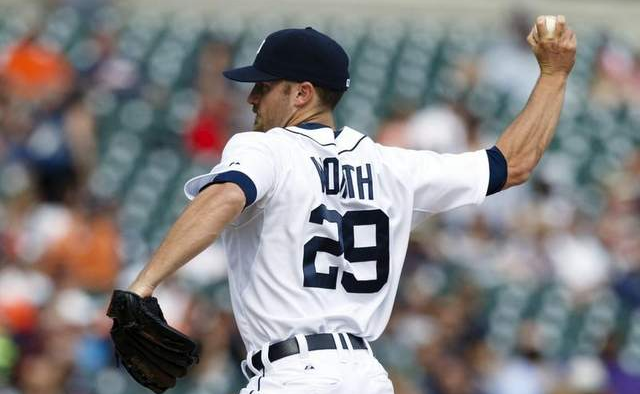 Instead of burning another relief pitcher, last night Tigers manager Brad Ausmus sent shortstop Danny Worth out to pitch the top of the ninth of a 9-2 blow out at the hands of the Texas Rangers.

Worth performed better than any of the Tigers who get paid to take the mound, giving up only a single to Chris Gimenez in his scoreless frame while striking out Michael Choice and Leonys Martin, who probably took some ribbing back in the clubhouse. Worth featured a 87 MPH fastball and also a knuckleball, which was responsible for the punchouts.

“He pitched well,” Ausmus said after the game. “Maybe to the point where you think, do we have this guy throw a bullpen every once in a while, just to give our relievers a break?”

This isn’t the first time a position player has had exceeded expectations on the mound. Baseball’s six best non-pitcher pitching performances are below.

Chris Davis 2012
Davis started the May 6, 2012 match-up between his Orioles and the Red Sox at DH. 16 innings later he was pitching in a 6-6 game.  The slugger recorded the first two outs of the frame with a strikeout and a deep fly ball. Then Marlon Byrd reached first on an error, but was thrown out trying to win the game on a double. The Red Sox had run out of pitchers too, but outfielder Darnell McDonald wasn’t able to match Davis’s clean inning, giving up a three-run homer to Adam Jones. Davis came back out for the bottom of the seventeenth and clinched his win with a game-ending double play. Since he finished 0-8 at the plate the chance to contribute on the other side of the ball must have been particularly sweet.

Wade Boggs 1997
Like Worth, Wade Boggs was sent in to pitch the last inning of a blowout. And like Worth, he impressed with his knuckleball. The Yankees were down 12-4 to the Angels in the bottom of the eighth when the Hall of Famer got his chance to show his versatility. He walked the first batter, but then used his flutter ball to retire the next three, getting the final out on a swinging strike. Boggs was one the most superstitious players in baseball, and one can only imagine the rituals he would have to go through before taking the mound if he had been a pitcher instead of a hitter. 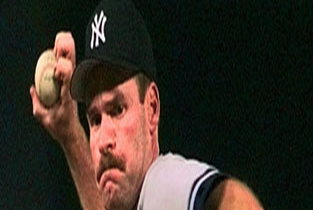 Glenn Wilson 1987
Wilson was a strong armed right fielder who had a few decent years for Philadelphia in the mid-eighties. With the Phillies down 13-3 in the bottom of the eighth to their rival Mets on August 5, 1987 Wilson got to test his rocket arm from the rubber. He passed, getting Hall of Famer Gary Carter to ground out, striking out All-Star Howard Johnson, and then retiring Rafael Santana on a weak come-backer for a hit-less, walk-less frame.

Rocky Colavito 1968
When it comes to right field arms, some will argue Rocky Colavito had the best. In his last season, playing for his hometown New York Yankees, Colavito got the call to the mound in the top of fourth inning of the first game of a doubleheader against the Tigers. The Yankees were down 5-0 and there were runners on first and second with one out. Colavito recorded the final two outs of the inning without allowing the runners to score, and then put up zeros in the fifth and the sixth. The Yankees scored one in the fourth and then exploded for five in the sixth, ultimately making Colavito a winner.

Ted Williams 1940
Ted Williams had a reputation for being a hitting savant who wasn’t particularly good at the other aspects of the game. However, in his one opportunity to pitch he equated himself rather well. The Splendid Splinter was just a 21-year old pup when manager Joe Cronin sent him in to pitch the top of the eighth inning with the Red Sox down 11-1 to Detroit. Williams breezed through the Tigers lineup in a scoreless first inning of work. He did run into a bit of trouble in the top of the ninth, but only gave up one run. A 4.50 ERA could probably get a middle reliever a couple million bucks a year in this market.

Babe Ruth
The Sultan of Swap famously began his career as a pitcher — and a really good one — but that all changed when he was sold to the Yankees before the 1920 season. He would return to his original position five times in pinstripes and was, amazingly, 5-0 in those appearances, which included four starts. There was a lot of luck involved in that record; his Yankees career ERA was 5.52. But you can’t say he didn’t work for those wins. In his last two starts, which came at the ages 35 and 38, Ruth pitched complete games.