David Ortiz, David Price And The Most Notorious Baseball Feuds 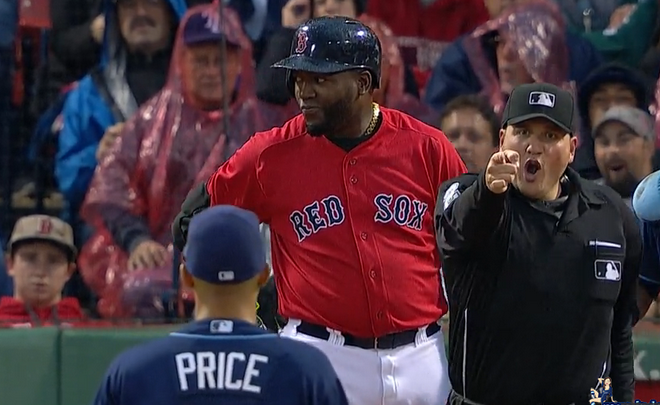 On Friday, Price hit Big Papi in the back with a 94 MPH fastball. It was the first time the Rays ace had faced the Sox slugger since Game 2 of the ALDS, in which Ortiz took Price deep twice and spent a good deal of time admiring his second blast.

In Friday’s post game press conference Ortiz accused Price of “acting like a little girl.” The All-Stars then patched things up in a phone conversation. However Ortiz hit out at Price again on Tuesday, while blasting the league office for only suspending Workman.

“I don’t think what they’re doing is fair,” Ortiz said. “I think the rules should be for everybody. We didn’t start this up. I didn’t hit nobody. Workman didn’t hit anybody in the first inning. [Price] did.”

“I’m not going to get hit again,” he continued. “Not by him. He did it on purpose. He punked me, and that’s very disrespectful. I’m a grown-ass man. To come back and do what he did [Friday night], I think it was some punk ass s—.”

The Red Sox and Rays, who are both struggling mightily this year, face off ten more times. Assuming Price is still with the team — and if the Rays don’t get it together the free-agent-to-be is a prime trade candidate — those will be some interesting match ups. We’ve already discussed baseball best teammate fights. Check out the game’s most notorious intrasquad feuds below.

Going into the 2000 World Series, Yankees pitcher Roger Clemens and Mets catcher Mike Piazza had history; Piazza had taken Clemens deep in three straight games and the Rocket responded by hitting Piazza in the head. In the first inning of Game Two of the Fall Classic, Clemens sawed off Piazza’s bat on what was a foul ball. Part of the bat’s barrel skidded toward Clemens, who then angrily threw it at Piazza, who was heading for first base. The two men menacingly walked toward each other and the benches cleared, although no punches were thrown. Clemens later claimed he was tossing the shard to a ball boy, but the video evidence suggests otherwise. As for Piazza, he said that after the World Series, which the Yankees won in five, he took karate lessons to be ready for his next confrontation with Clemens. He ultimately decided against violence because Clemens was “a really big guy.” And a really angry one, too.

Omar Vizquel vs. Jose Mesa
Some things are supposed to remain in the locker room. Omar Vizquel broke that cardinal rule of sports when he wrote in his 2003 autobiography that he blamed former Indians teammate Jose Mesa for blowing the 1997 World Series. The already volatile closer was none-too-pleased and promised he would throw at the shortstop whenever they squared off in the future. “Even my little boy told me to get him. If I face him 10 more times, I’ll hit him 10 times. I want to kill him,” Mesa explained. Almost true to his word, he would face Vizquel three more times and would hit him twice.

Catchers Barrett and Pierzinski both had reputations for being difficult characters, so it wasn’t that big of a surprise when they squared off in a 2006 interleague Chicago Derby. It started when Pierzinski, who had tagged up from third on a sacrifice fly and beat the throw home, bowled over his fellow backstop, who was waiting for the ball and blocking the plate. Then A.J. gathered himself and dramatically slapped home. This was too much for Barrett, who slugged Pierzinski in the jaw, knocking him backward and sparking an all-out bench clearing brawl. Piernzinski ended up on top of Barrett, and when the umpires finally cleared the melee he walked off the field raising his arms like a professional wrestler, much to the delight of the Comiskey Park crowd. 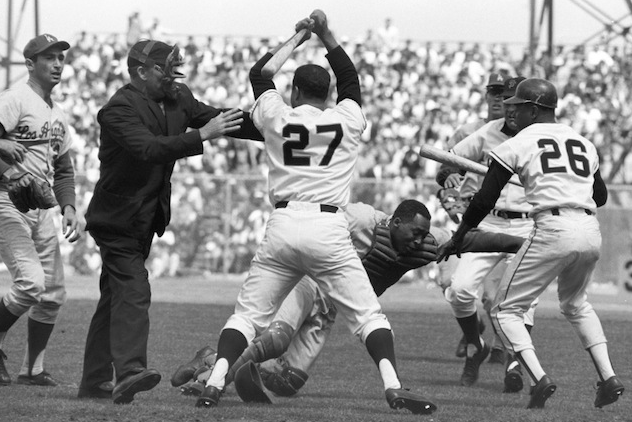 Giants pitcher Juan Marichal clubbing Dodgers catcher John Roseboro with his bat is one of the most notorious images in baseball history. The Giants and Dodgers had been bitter rivals, and there had already been bad blood between Marichal and Roseboro before the incident. Earlier in the game, which was in the thick of the 1965 pennant race, Marichal had flattened Dodger shortstop Pee Wee Reese on the base paths. So when he next came to bat Sandy Koufax moved him off the plate with a fastball. When Roseboro buzzed Marichal’s ear with his return throw the ace went nuts. He would eventual strike Roseboro in the side of the head, opening a bloody wound. Giants centerfielder Willie Mays, a good friend of Roseboro’s, rushed in to protect his buddy from his teammate.  Roseboro wasn’t seriously injured, despite all the blood, and he and Marichal would put the battery behind them and became friends. In fact, when Marichal came up short on his first two Hall of Fame ballots Roseboro lobbied on his behalf, telling voters they shouldn’t hold the ugly scene in 1965 against the 243 game winner, who was eventually inducted.

Babe Ruth and Ty Cobb
The feud between Babe Ruth was as philosophical as it was personal. “Anyone can hit a home run if they try,” Cobb sneered in 1920 when asked about Ruth, whose unprecedented home runs totals were taking baseball out of its dead ball period which the speedy Cobb had dominated. “It’s a brute way to approach the game.” Cobb, notoriously racist, would also get on Ruth for his perceived black features. Ruth returned the favor by insulting Cobb whenever his name was mentioned. It all came to a head during a game in 1924 when Cobb, the Tigers player/manager, had one of his pitchers throw at Ruth multiple times. Ruth finally had enough, pointing out to Cobb in center field. It looked for a moment like the two legends would square off mano-a-mano. They didn’t. However later in the inning a hit batsman sparked a 25 minute all-out brawl which had fans spilling onto the field to get in on the action. Ruth and Cobb would never become friends.