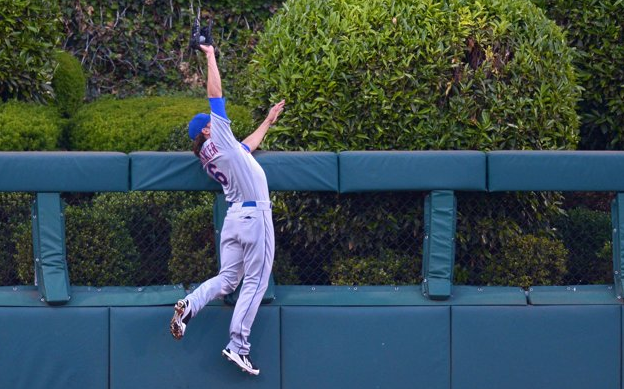 The leap in the second inning wasn’t even the only great play de Dekker made; he also threw out Reid Brignac trying to score on a Ben Revere single in the third. Although the game descended into a 11-2 laugher for the Mets, den Decker was protecting Bartolo Colon‘s 1-0 lead both times he flashed his run-saving leather.

It was den Dekker’s first start of the season, replacing the injured Juan Lagares, who has his own highlight real of defensive plays this year.

“I’m just trying to stay ready,” den Dekker said. “Nobody knew that Juan was going to go down. Things happen like that, so I just tried to get in there and have a good game and help the team out.” Check out the video of his exploits below

As we learned from those Nike commercials in the Eighties, Bo Jackson was an ace at anything athletic. As you can see this includes robbing Jack Clark of a home run.

It was an All-Star game, so no hard feelings, but American League centerfielder Torii Hunter scaled the wall to take a 2002 Midsummer Classic dinger away  from Barry Bonds. It was the third out of the inning, so on his way to take his position in the outfield Bonds and his giant head grabbed Hunter and took him on a playful ride over his shoulder.

Generously listed at 5’9, Shane Victorino is at a disadvantage when confronted with a Major League-sized outfield walls. But they don’t call him a the Flyin’ Hawaiian for nothing, as Jason Heyward learned in 2010.

The 2011 MVP times a drive off of the bat of Cody Ross perfectly and goes well above the wall at AT&T Park. The suave 360 he does after making the catch and then the supremely smug look on his face could not have pleased the home crowd.

Left field at Angel Stadium is a great place to rob a homer because the fence is only five feet tall. J.B. Shuck is 5’11 and he needed all of that and a bit more to take a round tripper away from slugger Jose Bautista.

Royals center fielder Cain timed this drive by Trevor Plouffe just right and then proves he has no fear of chain-link. While Cain is ecstatic, Plouffe is feeling cheated.

Whether he’s robbing home runs or instigating brawls, Gomez might be the most exciting player in baseball today. The Brewers would obviously prefer he stick to stealing homers.

Sometimes you eat the bar and sometimes the bar eats you. Or something like that.

Hicks has struggled to live up to his prospect status as a hitter, but he certainly has a habit of making spectacular run saving plays in the field.

One of Lofton’s nicknames was Spider-man, and you can see why at about the 55 second mark of the video. Loften may have been the most underrated player of his generation, both at the plate in the field

Chavez’s amazing grab off of a Scott Rolen home run bid gets extra points because it came during a tied Game Seven of the 2006 NLCS. He would received even more points if the Mets had gone on to win the game.

Kapler was best known for his ripped physique. However he proved he was anything but muscle-bound with this leaping grab at Dodger Stadium.

When people say Mike Trout is the best player on the planet they aren’t just referring to his offensive skills. Oddly, he’s never won a Gold Glove and Derek Jeter has five of them.

If it wasn’t for Robbie Grossman, Chris Young would have had a walk off home run. It was the second straight game of tough luck for Young; the night before he had hit a walk off bid that just missed nicking the foul poll and was only ruled out of play after a long conference between the umpires.

The fence at Camden Yards is the perfect height for creating home run robbing highlights. In this one, Mike Devereaux also gets a piece of the face of a fan who got to close to the action, which he feels bad about.

Despite being somewhat of a portly fellow, Andruw Jones may have been the finest defensive outfielder in baseball history. Shawn Green, and many other frustrated hitters, would probably agree with that assessment.

Granderson uses his full extension to take a homer away from fellow center fielder Grady Sizemore. We usually just see that kind of smile from Justin Verlander when he’s cozying up to Kate Upton.

It may have just been a grapefruit league game, but how many times do you see a player rob someone of a round tripper twice in one game? Especially a player with a beard like Reddick’s.

Akamatsu uses both his scaling and jumping abilities to take away a dinger. If there’s ever been a better homer saving grab on any continent we haven’t seen it.