Lenny Dykstra And Other Baseball Players Who Should Get A Biopic 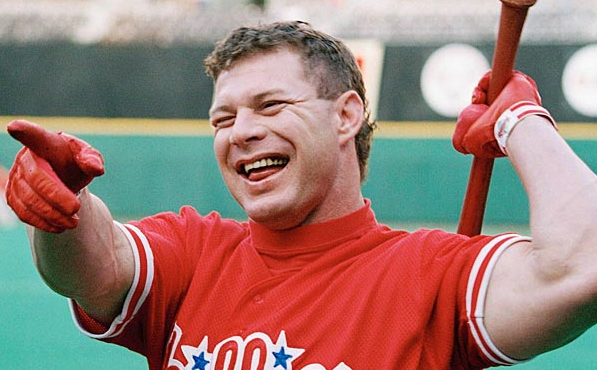 Lenny Dykstra has certainly had himself an interesting life. He was three-time All-Star, an MVP candidate in his only two seasons as a healthy, full-time starter and absolute post-season beast, slugging ten homers with .321 batting average in his 136 October plate appearances. (In the regular season the speedster had only 81 homers in 5282 plate appearances. )

He played as hard as his nickname of Nails suggested, and always with a heaping wad of chewing tobacco in his mouth. Tobacco was far from his only vice, and the world learned of Dykstra’s wild off-the-field lifestyle in 1991 when he crashed his car drunk on the way back from John Kruk‘s bachelor party, breaking his ribs, cheekbone and collarbone and also injuring teammate Darren Daulton.

Dykstra, who’s also an admitted steroid and recreational drug user’s, life got even more crazy after he retired. He was lauded for his business acumen after starting up a seemingly successful chain of car washes and was also an investment columnist for The Street. The website’s founder, TV personality Jim Cramer, was Dykstra’s biggest fan and pumped him by calling him “one of the great ones in this business” and among only “four or five” people in the world he would take stock picks from.

But it turned out his stock picking, like everything Dykstra did in the business world, was based on fraud and flimflam. Beginning in 2009 Dykstra was hit by an almost endless parade of criminal and civil charges, ranging from non-payment of debts to grand theft auto to possession of narcotics to sexual harassment to even indecent exposure. He ended up serving about six months in federal prison on the grand theft auto and filing a false financial statement. It wasn’t long after he was released in 2013 that he got into an altercation with ex-teammate Mitch Williams at an autograph event, suggesting jail hadn’t mellowed him much.

Now the crazy life and times of Lenny Dykstra is slated for a theater near you. The untitled movie will be directed by John Lee Hancock, who helmed big-budget sports flicks “The Blindside” and “The Rookie.” “Blindside” producer Gil Netter apparently purchased the rights to Dykstra’s story when he was released from prison. Given the big names behind the project, it’s not out of the realm of possibility that a A-list star like Matt Damon or Mark Walhberg will end up playing Dykstra. (It was actually Dykstra who suggested those names. Nobody ever said he lacked from confidence and self-regard.)

If baseball biopics are going to be a thing now, here are some other players who we would like to see get the big screen treatment.

Yasiel Puig
Most of the current crop of Cuban players, Aroldis Chapman and Jose Fernandez especially, had interesting and sometimes harrowing journeys to the United States. But none of the them match Puig’s for drama. His defection tale includes a march through through a crocodile-infested jungle by a human trafficking syndicate, contentious negations between groups of drug running middlemen in which machetes were used to threaten Puig’s limbs, and a daring late night rescue of Puig by one group from another. The Dodgers sensation still faces threats of both the legal and illegal variety from those who feel they are owned money for escape. Maybe he could defry some of his legal costs by selling the rights to his amazing tale.

Josh Hamilton
Everybody loves a good redemption story, and Josh Hamilton has one of the best. The slugger was the top prospect in baseball coming out of high school. He performed well in his early minor league career, but also began experimenting with narcotics which led to multiple failed drugs tests and three years out of baseball entirely. He eventually cleaned up and made a humbling return to the sport, which included mopping bathrooms and sleeping on the floor of a baseball academy. He would eventually regain most of his skills, and would win the 2010 American League MVP with his heavily tatted arms evidence of his past struggles. Now if only he could provide a happy ending for Angels fans too …

Pete Rose
Of all the baseball shenanigans that have gone on over the last few decades, Pete Rose in the only player to be permanently banned from baseball. One of the game’s most dominant players in the sixties and seventies — his Hall of Fame ex-teammates turned broadcasters Mike Schmidt and Joe Morgan are always quick rave about his skills and competitiveness — the eighties saw Rose as an aging singles hitter chasing baseball’s all-time hit record, and later a player/manager who copped to betting on his own team. (Albeit to win.) Rose now cuts a tragic figure; hustling autographs and personal appearances. But Charlie Hustle has had one of sports more interesting journeys.