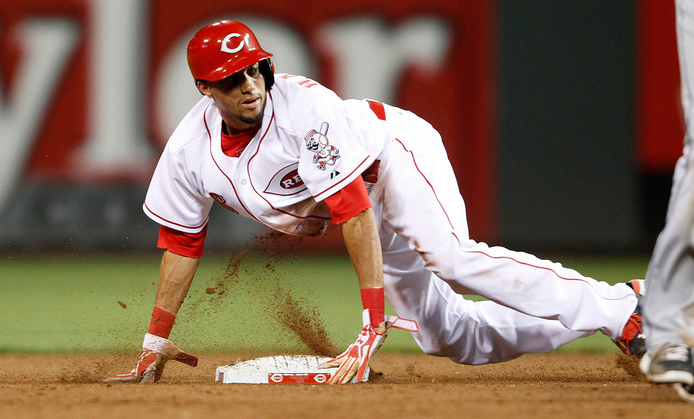 Billy Hamilton
The speedy Reds prospect has had himself a pretty good spring — hitting around 300 and flashing that 100 stolen base pace that has everybody so excited. But this was the same guy who had a .306 on base percentage last year in Triple-A and was sent home from Puerto Rican League this winter because he couldn’t hit at all. You can’t steal bases if you don’t get on base, and even if Hamilton does manage to put up a gaudy total by running each time he reaches first he still has the potential to do quite a bit of damage in three of the other 5X5 categories.

We’ll keep with the Hamiltons and move on to one who’s actually had quite a bit of past fantasy success. Yes, Hamilton was bad in 2013.  But he’s had down years before and was able to bounce back big. Don’t count on it in 2014. Hamilton will soon be 33 and his years of addiction make him old for his age. He has already missed time with a calf injury this spring, and even a locked in Hamilton is an extreme injury risk. Then there is his strikeout rate, which has blown up since 2012. It didn’t hurt him that year, largely because of great first half, but it certainly bit him in 2013. It’s possible that opposing pitchers have simply figured out that Hamilton swings at anything and he will no longer be getting good pitches to hit.

Rafael Soriano
Just about every closer is a potential bust, which is why you should be weary of paying for any of them. But definitely stay away from the Nats’ ninth inning man. Soriano’s declining fastball speed and declining strikout rate would be worrisome on their own. But it is compounded by Soriano’s contract situation with Washington: his 2015 option for 14 million dollars vests if he finishes 62 games in 2014. With capable high leverage relievers Drew Storen and Tyler Clippard also in the Nats bullpen don’t expect manager Matt Williams to keep running Soriano out if he doesn’t regain the ticks he has lost on his fastball.

Jose Daniel Abreu
We were thinking about putting Masahiro Tanaka on this list. But then we saw some Spring Training tape of his splitter and, well, feel free to draft him. But, as a general rule, one should be weary of much-hyped foreign players, like Jose Abreu. Abreu certainly has the pedigree and Cuban players  Yoenis Cespedes and Yasiel Puig both provided a lot of fantasy value in their first season. But there have also been a slew of foreign imports who have flopped. The key is thinking of Abreu as middle of the road fantasy first base, not a guy you’re going to waste an early draft pick or top dollar on.

Freddie Freeman
Coming into the 2013 season there was much excitement over the Braves’ toolsy outfield of Jason Heyward and the Upton brothers. But it was Freddie Freeman who stole the offensive show, hitting 319 with 23 homers and 109 RBIs. Freeman also posted a BABIP of .371, fifth best in the major leagues and well above his previous career high. Expect a 2014 line closer to a 280 batting average with 90 RBIs. Good, but not worth the second round pick Freeman is currently going as.