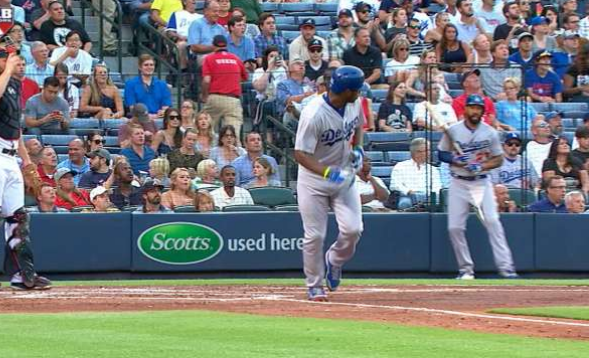 Yasiel Puig’s bat flipping antics are known far and wide. But the enigmatic outfielder doesn’t just flip his back in celebration. (Or to mistakenly celebrate something not worth celebrating.) He also goes to his signature move when he’s frustrated.

In the Dodgers game against Atlanta last night, Puig popped up the first pitch he saw from Mike Minor in the third inning. Matt Kemp was waiting on deck, and when Puig flipped his bat in anger he almost struck his teammate.

Despite Puig tough at-bat (and Kemp’s fancy footwork) the Dodgers won the game 4-2, behind the pitching of the suddenly rejuvenated Dan Haren.

We don’t like to rumormonger here, so we’re just going to chalk the incident to Kemp being at the wrong place at the wrong time.

Now if it was Andre Ethier — who’s been the odd man out in the Dodgers crowded outfield — flipping his bat at Puig, Kemp or Carl Crawford … then we might have something to talk about.