Puig Flips Bat. Flies Out Two Steps in Front of Warning Track. Is Like A Seinfeld Character. 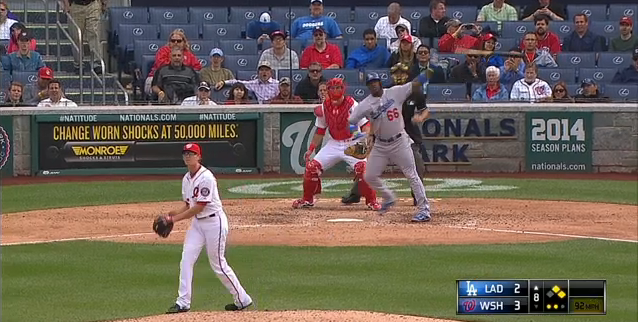 During yesterday’s game between the Dodgers and the Nationals at Nationals Park the wind was blowing in from center at 5 MPH. Although that hardly enough explains what transpired during Yasiel Puig‘s at-bat in the top of the eighth inning against Nat’s reliever Tyler Clippard.

With Washington up 3-2 and two runners on Puig caught hold of a Clippard fastball and “drove” it to center. He flipped his bat upon contact, resulting in a groan from the home crowd.

But they had nothing to worry about. Center fielder Denard Span just need to back up a few steps and caught the fly ball well before the warning track in what wasn’t even the deepest part of the park.

We’re not here to bash Puig, who, like Seinfeld’s “simple country boy” Billy Mumphry, suffers from the duel curse of cockeyed optimism and unbridled enthusiasm. Thanks to the Cuban refuge’s antics there is nobody in baseball we’d rather watch hit a fairly routine fly ball to center.

This isn’t the first go-around for Puig with premature celebrations. During the 2013 NLCS he threw his arms up into the air like he’d just conquered the known world after driving an Adam Wainwright pitch to right. The ball ended up bouncing off the base of the wall and even though Puig had spent precious couple of moments admiring his not-so-majestic blast he was able to use his speed and still got to third standing.

Nor is Puig the only player to make home run assumptions that just didn’t jive with the stadiums dimensions: In 2011 Shane Victorino, then on a minor league rehab assignment, put his head down and trotted around third and most of the way to home plate before being informed that he had actually hit a very loud foul ball.  On the bright side, at least he was back to where he was supposed to be.

The greatest premature home run celebration, however, didn’t even take place in the United States. It happened during a Korean League game between the Lotte Giants and the NC Dinos. With the tying run on in the ninth inning Giants player Jeon Jun-woo drove a pitch to left. He dramatically flipped his bat and rose his arm in game-tying victory. The crowd roared. The play-by-play man went crazy and the left fielder rashed back to the wall.

A moment later the left fielder was moving in from the wall. Jun-woo’s fly ball had barely made the warning track.

Jun-woo froze in his tracks along the first base line, looking shocked and dejected. The Dinos first baseman took pity and gave him a sympathetic pat on the back. The Dinos bullpen wasn’t as sympathetic: They laughed and they laughed.

Neither Puig nor Billy Mumphry has anything on Jeon Jun-Woo.