Pirates Win On A Walk Off Replay (VIDEO) 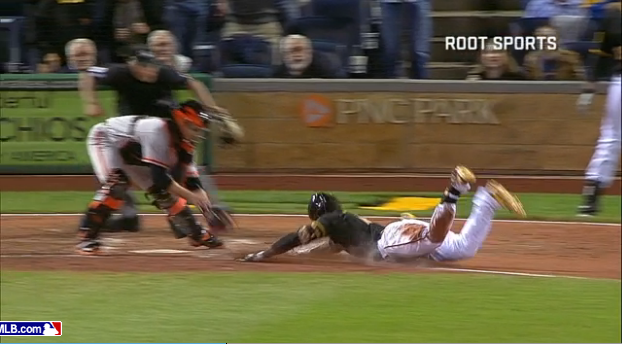 In the hierarchy of game ending dramatics, the rare walk-off inside-the-park home run ranks the most exciting. We almost had that last night in Pittsburgh; with two outs in the bottom of the ninth of a tie game Pirates outfielder Starling Marte tripled over the head of Giants rightfielder Hunter Pence and then scored after an errant relay throw from second baseman Ehire Adrianza got by third baseman Pablo Sandoval.

Initially, the umpire called Marte out, as Sandoval played the carom well and threw a strike to catcher Buster Posey. But Pirates manager Clint Hurdle challenged and minutes later we had baseball’s first ever walk-off replay and a 2-1 Pirates victory. Check it all out below:

As you can see, Posey missed with his first swipe, allowing Marte to get in before his second tag. Not only did replay overturn the play, but 2014’s other big rule change was also a factor; if Posey had been allowed to block the plate there’s a good chance he would been able to get his first attempt on Marte’s body.

But how does the walk-off replay rank on the walk-off excitement scale? Well, it took about three minutes to review the play, and that amount of time can veer into melodrama — especially since it was obvious Marte was safe from from the first time the play was slowed down.

During the review, Marte sat confidently just outside of the Pirates dugout and the home crowd cheered each time they showed the play on the stadium’s scoreboard.

“I knew I was safe,” Marte said after the game. “It was just about waiting for the umpire to make the decision.”

Once the call was reversed Marte jumped up on to the field and was swamped by his teammates, who had been waiting patiently in the dugout to get their celebration on.

The reversal made Giants starting pitcher Tim Hudson, still on the mound in the ninth, the hard-luck loser.

“Replay is going to provide the final conclusion,” Hudson said. “It is what it is and you’ve got to accept it. But it’s frustrating to be to the end of a call that cost you the ballgame. I’ve seen calls that were closer than that but weren’t overturned.”

The play in question wasn’t particularly close — so we’re not sure what games Hudson has been watching.

And the key is that they got it right. While the review process can still be a bit cumbersome, as long as replays are available to the fans the game will have more integrity if umpires also have access to them.

After the game Marte joked that he likes replay “sometimes.” A sentiment we imagine is shared by most of his big league brothers.