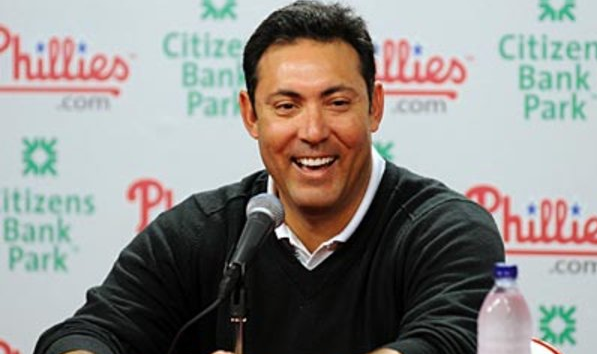 (This is the first in a series of periodical trade deadline breakdowns.)

The Phillies were the best team in baseball between 2007 and 2011. However, they have struggled since their 102 win season in 2011, and General Manager Ruben Amaro Jr. has been roundly criticized for handing out long contracts to aging stars, and depleting the team’s once strong minor league system in trades.

While there is plenty of evidence Amaro is a terrible GM, the two most popular knocks against him don’t necessarily hold water. So far none of the dozen or so prospects the Phillies have dealt have looked like future impact players. (Right hander Jarred Cosart, now of the Astros, has good numbers but scary peripherals.)

Amaro has had some misses on contracts to aging vets — Ryan Howard just isn’t good, and no relief pitcher should be paid like Jonathan Papelbon.  But the deals he made with Chase Utley, Jimmy Rollins, Carlos Ruiz, Marlon Byrd, A.J Burnett and Cole Hamels and Cliff Lee have each so far proved to be somewhere in the range of acceptable to pretty good.

Amaro’s main failing has been building a team around those aging vets. Young outfielders Domonic Brown and Ben Revere have been among the worst starters in baseball this year, the team’s rotation after Lee, Hamels and Burnett is mediocre and with little depth, they get almost nothing from their bench, and their minor league system is a mess. On the bright side, their young bullpen has begun to show signs of dominance and have been a big part of their current 11-6 run.

Still, the Phillies sit six games under .500 and the chances are they will be sellers come the July 31 deadline. Let’s breakdown the Phillies most likely to go.

Infield
Chase Utley and Jimmy Rollins, the Alan Trammell and Lou Whitaker of their generation, are both playing as well as they have for a few years and each have manageable contracts. A team that trades for Utley would be on the hook for reasonable $ 15 million in 2015, and then three more years of $15 million dollar options that only vest if Utley reaches 500 plate appearances. Rollins will be paid 11 million in 2015, the last year of his contract. Utley is still one of the best few second baseman in the game and would be a much sought after deadline addition if he was available, especially with the Yankees, Dodgers and Giants in need of infield help. If he was available. Utley has made it clear numerous times he wants to stay in Philly, and it’s unlikely he would waive his ten-and-five rights. Rollins also has full trade protection and has said he wants to stay put, although the Phillies new all-time hits leader did back of that a bit in a recent interview.

Philadelphia would need to get a big return to deal Rollins; he’s a popular player in town, doesn’t make a whole lot of money, and they don’t have anyone else to play shortstop for the next year-and-a-half. Same scenario with their catcher Carlos Ruiz, who could attract some trade deadline attention. It’s unlikely either will be dealt unless a desperate team blows Amaro away.

The once famously untradeable contract of first baseman Ryan Howard is getting slightly more tradeable by the day.  In fact, we can envision the Phillies shipping the Big Piece — along with about 75 percent  of his remaining salary — to an American League team who will have the good sense not to play him in the field or against left-handers. However, we can’t envision that happening until next year’s trade deadline, so Phillies fans will have Ryan Howard to kick around for at least another year.

The solid play of 24-year old third baseman Cody Asche has been eye opening and his short left-handed stroke has evoked comparisons to Utley. Nevertheless, Asche plays the same position as the team’s top prospect Maikel Franco, so the Phillies would probably listen on him. Although we doubt anything would come of it. 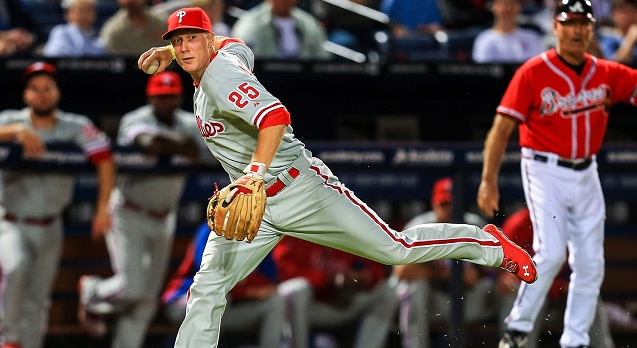 Outfield
The recent signing of Grady Sizemore suggests the team expects to deal at least one of their outfielders. Byrd continues his late-career reemergence and will be gone if the Phillies can get a package similar to what the Mets got for him at the 2013 deadline. Fourth outfielder John Mayberry Jr. seems destine for a new address, but the return will be minimal because he’s fourth outfielder John Mayberry Jr. Although the Phillies would probably be a better team if they benched Brown and Revere and called up random minor leaguers, it still doesn’t make a whole lot of sense to trade the underachieving duo when their value is at an all-time low.

Rumors of a Philly/Kansas City my-fallen-mega-prospect-for-your-fallen-mega-prospect swap of Brown and third baseman Mike Moustakas were popping about a week ago. However, since third base is the only position in the Phillies organization with both talent and depth this doesn’t seem like a good match.

Starting pitching
All the Phillies starters, including Cole Hamels, will be available. It will take at least three top prospect to get the younger of the Phillies ace lefties, and most teams would balk and paying that price for pitcher still owed over $100 million. Cliff Lee, on the other hand, is only owed about $50 million and could probably be had for one big-time prospect and some other usefulness.  He’s been on the DL for the past five weeks, but the 35-year old should be back in the rotation around the All-Star break. Lee was good as always before his somewhat mysterious and apparently-now-fixed arm troubles, and if he comes back pitching at his typical level expect lots of inquiries on his availability. AJ Burnett could also be attractive to a contender, but has some trade protection and is notoriously prickly about where he will play.

Relief pitchers
Coming into the season, all the talk about Jonathan Papelbon surrounded his huge contract and declining fastball speed. His contract is still huge and his fastball still isn’t as fast as it once was.  However his overall stuff has been pretty electric and by becoming more of a pitcher and less of a thrower the closer is posting his best numbers since his early glory days in Boston. Is that enough for a team to give Amaro a viable prospect for Papelbon? Probably, if the Phillies throw in a chuck of the 30 million Papelbon is owed between the deadline and 2016. Detroit Tigers, we’re looking right at you.

What will happen at the deadline
Byrd and Mayberry should be dealt, and we think there is a better than 50 percent chance Papelbon will be take his jerk-face to a new location. The always-available Cliff Lee is the wild card. If he’s healthy and a team wants to give up something significant for him, he’ll be getting a new address. If not, we’ll be talking about him again at the 2015 deadline. 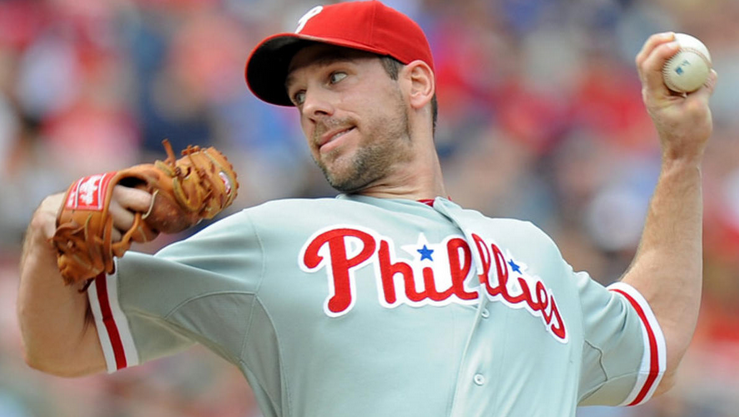