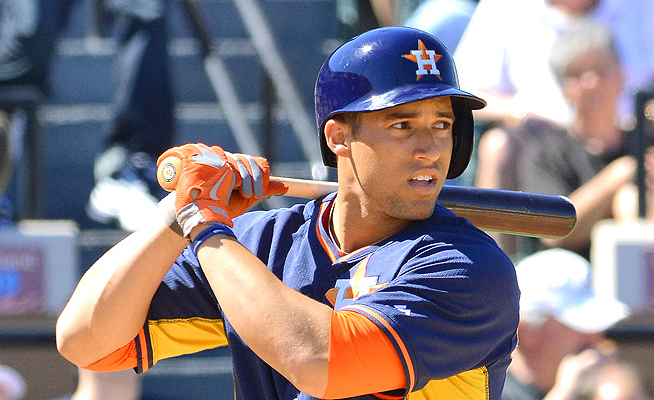 There is not a lot of joy in Astro-land. The squad has lost at least 106 games in each of the last three seasons, and last Monday their game against the Angels earned the dreaded (and extremely rare) 0.0 rating in the Houston market.

With their 5-9 start, the league’s worst team has given their few remaining fans little to cheer about. However, the faithful could at least crack a smile this morning when they got word uber-prospect George Springer was being recalled from Triple-A.

Springer, the team’s number one pick in the 2011 draft, exploded in 2013, hitting .303 with 37 homers and 45 stolen bases between Double and Triple-A.  He was off to a great start for the Astros affiliate Oklahoma City this year, slashing .353/.459/.647 while going 4-for-4 stealing bases. He had homered for the second straight game on Tuesday, a grand slam which was part of his 3-4 day. Baseball Prospectus ranks Springer the 20th best prospect in baseball.

Springer is a natural center fielder but has been learning right in the minors this year. He will likely man the corner with the big club since they have Dexter Fowler, one of their few productive players, in center.

To make room for Springer, the Astros sent down Robbie Grossman. In a separate move, pitcher Lucas Harrell, who had allowed 14 runs in three starts, was designated for assignment.

Last September, the Astros offered Springer a seven-year, $23M contract. This prompted his agent and the MLBPA to consider filing a grievance; they believe the club was essentially telling Springer unless he signed a team-friendly deal he wouldn’t be called up at the beginning of the 2014, which could push his first free agent payday back a year. 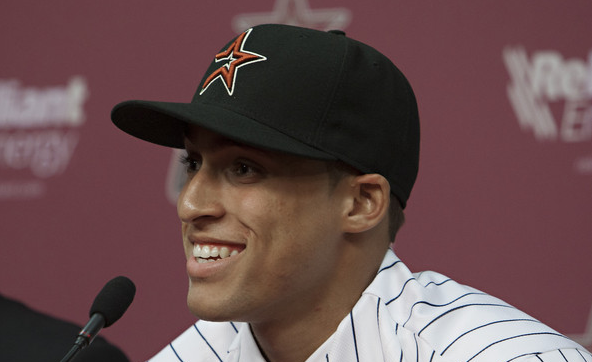 They never did file that grievance, and it would appear that by calling Springer up this early in the season the Astros did give up that year of team control. But the rules of service time are complicated; it’s entirely possible the cost-conscious Astros did wait long enough to delay Springer’s clock. We won’t have a clear answer to that question until Super-2 status is determined later this year.

This in mind, it will be interesting to see if the news of Springer’s recall is followed by news of a deal — maybe a bit more lucrative than what had been reported last September.

That’s what happened in 2008 when the Tampa Bay Rays recalled their top prospect Evan Longoria, and the contract Longoria entered the league with currently ranks as the second best in the Majors.

The best belongs to Mike Trout – the player Astros fans would like squint really hard and compare Springer to. Although he’s still being underpaid, Trout made a nine-figure fortune by not discussing any kind of buyout of arbitration and pre-arb years until he posted the best ever combination of rookie and sophomore years.

Trout’s tale suggests Springer would be wise to hold off on a deal.  On the flipside there have been quite a few players of Springer’s minor league pedigree who have completely flopped. Somewhere in the neighborhood of $30M in guaranteed money could be mighty tempting.

As for fantasy baseball, Springer provides a solid opportunity for steals and home runs. He might not hit for the same type of average in the show, but his power and speed are pretty elite at any level, and he will certainly be getting a lot of playing time for the hapless Astros.