For the second straight year, Jake Peavy has been moved from a struggling team to a contender.

The San Francisco Giants acquired the 33-year old from Boston for pitching prospects Edwin Escobar and Heath Hembree. Like most of the Red Sox, Peavy has been disappointing in 2014 and leaves Boston with a 1-9 record and a 4.72 ERA.

The right-hander played a key role for the world champion Red Sox in 2013, going 4-1 for the team after coming over in a trade deadline deal with the Chicago White Sox. During the first half of his career Peavy was one of the best pitchers in baseball, winning the 2007 National League Cy Young while with the San Diego Padres.  Injuries, including a detached latissimus dorsi muscle in his back, began to take their toll in 2010, and even when at his best Peavy has been more of a middle-of-the-rotation guy since.

The Giants are locked in a tight race with the Dodgers in the National League West, currently leading their rivals by a half game. Peavy comes in to give their usually terrific pitching staff a boast — while Madison Bumgarner and Tim Hudson have pitched like aces, Tim Lincecum and Ryan Vogelsong have been inconsistent and Matt Cain was put on the disabled list July 11 with no set return date. 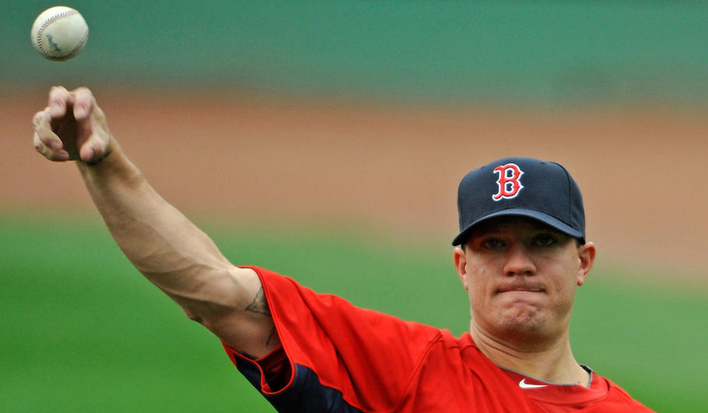 The question becomes whether Peavy will be an upgrade from Yusmerio Petit, who was less than impressive this week subbing for Cain, but who did have some success as a starter earlier in the season.

A big factor in Peavy’s attractiveness to the Giants is his 14-2 record with a 2.21 ERA in 25 career starts against the Dodgers. He also played in San Diego for current Giants manager Bruce Bochy. The Giants and Red Sox are said to be splitting the $5 million owed to Peavy in 2014. Peavy does hold a conditional 2015 player option for $15 million. But it only vests if he throws 132 more innings this year, which is virtually impossible.

As for the Red Sox, they get Escobar, the Giants number two pitching prospect, and Hembree, their 11th. Escober, the 56 best prospect overall according to Baseball America, has struggled this year in the hitter friendly Pacific Coast League. The 22-year old had been dominate in 2013 in AA and high A ball.

Boston might not be done dealing starters, and there have been lingering rumors ace Jon Lester may also be on the move. In an interview with Gordon Edes yesterday, Lester, a free-agent-to-be, said that he would be open to returning to the Red Sox in 2015 even if the team deals him before the deadline. The Red Sox would also listen to inquires on Clay Buchholz, but they’d be selling low on the struggling righty

Peavy, Lester and Bucholz were the core of World Series winning rotation less than a year ago. The Giants are hoping Peavy can be part of one again in a few months. Maybe he can bring his cigar store Indian with him for good luck.