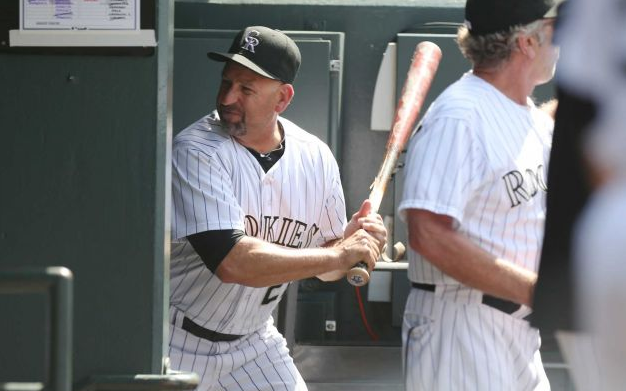 The notorious unwritten rules of baseball reared their confusing heads during yesterday’s game between the Braves and the Rockies. It started when Braves catcher Gerald Laird was struck in the mask by Corey Dickerson‘s back swing. This was just two pitches after he had been slammed in the head with a foul ball and it was all too much for his noggin to take and he collapsed into a heap.

Although Laird didn’t appear to be seriously injured, it was the eighth inning and Colorado was up 8-3 so they Braves’ manager Fredi Gonzalez decided there was no point subjecting his catchers skull to more abuse and he was replaced by Evan Gattis. With his first pitch to Gattis, Braves reliever David Carpenter hit Dickerson.

There was no question Dickerson’s beaning was deliberate, even though it would have been very unusual if Dickerson had purposely struck Laird with his back swing. (He also denied doing so after the game.)

The Braves retaliation enraged Colorado manager Walt Weiss so much that he got himself ejected and then went crazy in the dugout, striking its defenseless wall with his bat.

Of course now it was the Rockies who had to retaliate and the next inning reliever Nick Masset plunked Gattis, leading to more ejections, although this time bats and walls were spared.

We wish we had a video of Weiss’s tantrum, because from the photos it looks like it was a doozy. So instead we’ve put together a video list of some of the other great dugout tantrums. We certainly don’t presume these to be the best tantrums of all-time, but rather they are the most entertaining dugout fits that have been caught on tape and are on YouTube or in MLB.com’s video archives. Read on for grown men acting like petulant and very strong children.

David Ortiz argued balls and strikes with umpire Tim Timmons, which is a no-no and got him ejected. Big Papi didn’t take well to his removal from the game and used his bat to kill the dugout phone. The communication device fought back, shattering Ortiz’s hitting stick and sending wood shards all over the dugout. Teammate Dustin Pedroia gets caught in the crossfire and angrily confronts Ortiz, adding another layer to the mayhem.

Pavano didn’t pitch well and it’s the dugout that pays the price. Pavano often pitched poorly, so it’s a wonder there are still so many dugouts left standing abound the big leagues.

BJ Upton and Evan Longaria go at it

Upton doesn’t hustle for a ball in the left field gap, resulting in a triple. Longaria confronts him in the dugout and suddenly Upton isn’t so lackadaisical.

Zambrano was an enormous man with enormous anger control issues, which often manifested themselves in the dugout. His blind, horrifying rage is a big part of why a 33-year old with a 132-91 career record is not currently playing Major League baseball.

Catchers have to be particularly careful about arguing balls and strikes during their at bats. So backstop Russell Martin keeps his mouth shut after being called out on strikes, and then takes his frustrations out on the Pure Michigan sponsored benches in the Comerica Park visitor’s dugout. Would that qualify as fee advertising?

Brian Wilson and his beard do not appear to be happy in this clip. But, like with anything Wilson-related, we suspect this is more of a performance than it is genuine anger.

Bryce Harper gets ten stitches after bat hits him back

Unfortunately, no video exists of the classic incident in which Nationals rookie Bryce Harper smashed his bat after an out and then had his bat smash him back right in the face. In this video his manager Davey Johnson matter-of-factly describes the youngster they call Bam-Bam’s self-destructive tantrum.

Tim Belcher wants the press to turn their cameras off

Giving up a game losing home run in a playoff games  can’t be a good feeling. That’s what happen to Mariners pitcher Tim Belcher in Game 2 of the ALDS against the Yankees. He doesn’t want anyone to film his tantrum, but obviously somebody didn’t turn their bleepin’ camera off. (Not quite a dugout tantrum, we know, but we’re pretty sure Belcher smashed up the dugout before taking the rage-which-shall-not-be-filmed into the locker room.)