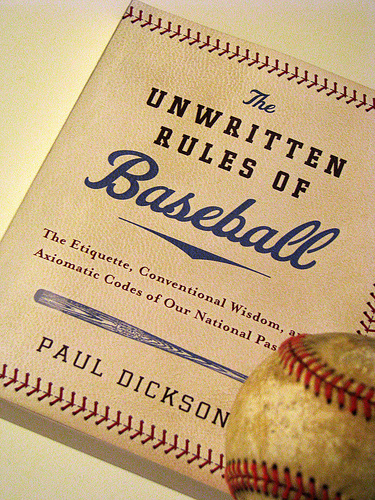 The official baseball rule book is well over a hundred pages long. And that doesn’t even get into the numerous unwritten rules that govern the game. Some of these shadow regulation that have been passed down the baseball generations are rules of etiquette, and others are rules of strategy. We have a rundown of all the important unwritten rules of baseball below.

Never mention a no-hitter in progress
This superstition may be baseball’s most famous unwritten rule because it also applies to broadcasters and even fans.

Never steal bases when you are way ahead
That’s just rubbing it in. However the definition of “way ahead” has changed since this rule developed, in the deadball era. While back then it would be improper to steal when ahead by more than a couple, these days you wouldn’t be in trouble until you’re up by at least five.

Never steal bases when greatly behind
Since there isn’t much difference between being on first and second (or second and third) when your team is down big, running in that situation makes you an unserious stat-padder.

Don’t swing 3-0 when you’re team is way ahead
Again, rubbing it in.

Don’t work the count if you are way up or way down
Everybody just wants to go home.

Don’t steal third with two outs
There’s no etiquette behind this one. Instead, it’s because there are far fewer advantages to being on third, rather than second, with two outs as there are with no or one out. And by stealing with two outs you risk taking the bat out of the hitter’s hand and ending the inning,. However there are some still some advantages — particularly as team’s get more aggressive with outfield alignments — so you see this happen more and more.

Don’t make the last out at third
See above

Never step on the pitcher’s mound
This one famously caused a kerfuffle between Alex Rodriguez and Dallas Braden and afterward A-rod claimed he didn’t know it was an unwritten rule.

Don’t admire a home run
A sliding scale here. What would count as not admiring a home run in 2013 would have probably caused a bench clearing brawl in 1950.

Never get in the batter’s box while the pitcher is warming up
Yes, pitchers are delicate flowers. 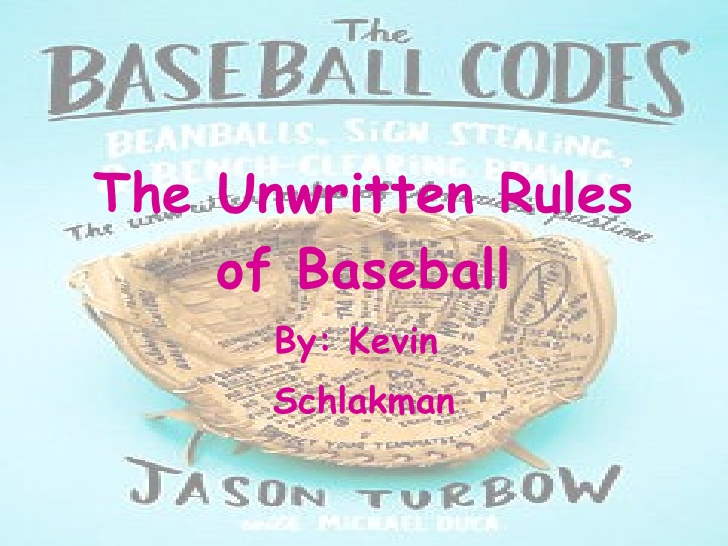 No excessive celebrating after a strikeout
Hitters can be delicate flowers, too.

Don’t sacrifice in front of your best hitter
Because if you clear first base the other team is likely going to take the bat out of his hands by walking him.

If you’re bunting for a sacrifice, don’t try for a base hit
Because they are different skills.

Never hit-and-run with an 0-2 count
Actually, some would argue since hitters make their worst contact down 0-2 this is the best time to hit and run. The counter would be you don’t want to force a hitter into swinging when he has two strikes on him.

Take a strike when your team is behind
Because the first step to a comeback is just getting on base.

If a pitcher hits a teammate deliberately, hit one of theirs
This eye-for-an-eye code is more costly now that there are warnings and automatic ejections.

When throwing at hitter, never aim for the head
The brain is very important to most people

Play for the win on the road, a tie at home
The home team always has the advantage during a tie game because they get the last at-bat, and when the home team is playing for one it also means they have at least one more out than the visitors.

Don’t rub the mark after a hit by pitch
The best revenge is living well. Or at least pretending that 95 MPH fastball to the forearm didn’t hurt.

Don’t show up your fielders
A pitcher’s body language is very important when a fielder flubs a play.

Pitchers stay in the dugout until at least the end of the inning they get pulled
If not, it makes them appear above the team and petulant.

Always run onto the field if there is a fight
You can’t have a bench clearing brawl if some prima donna decides to stay on the bench.

Always run out ground balls and pop ups
You don’t want to be the lazy bum “making X millions of dollars a year.”

Relievers throw fastballs to other relief pitchers
Relief pitchers rarely ever bat. And, if they do, they can expect some sympathy and only straight stuff from their bullpen brethren.

Don’t play the infield in with a runner on third base early in games
If you break this one you are either saying your offense is anemic, or  it’s the ultimate homage to the opposing pitcher. (Or, most likely, a little of both.)

Never walk the tying or go-ahead run.
Because you can’t score from the dugout. 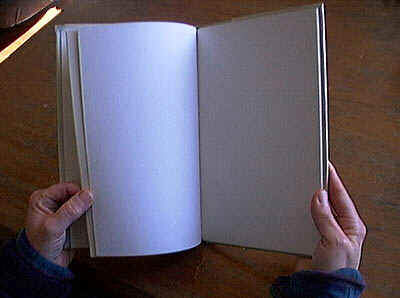