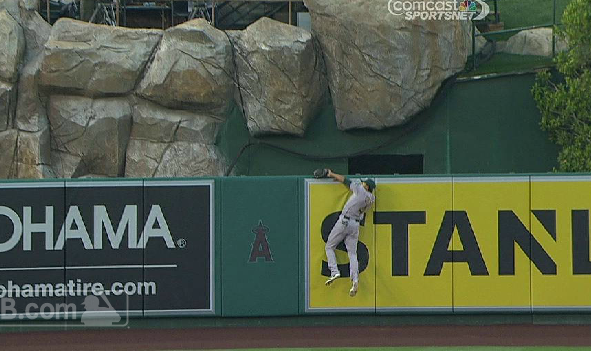 Flashy defensive plays have been the name of the game during the series between the AL West leading Oakland A’s and the second place Anaheim Angels which ended yesterday. On Tuesday, A’s left fielder Yoenis Cespedes made what some people are calling the greatest throw in Major League history to nail a bewildered Howie Kendrick at the plate. The Cuban import was up to his tricks again Wednesday, bobbling a Albert Pujols liner into the corner and then nailing the slugger with a perfect throw when he foolish tried to stretch his double into three bases.

But yesterday Cespedes’s play was overshadowed by the glove work of the game’s two center fielders. In the first inning of what was ultimately a sweep-preventing 7-1 A’s victory Mike Trout did his Mike-Trout-thing and went over the center field wall to rob Cespedes.

That may have been a homer, or, at worst, a double. Cespedes would have the last laugh, however, and had two RBI singles later in the game. But the funniest (and best) play of the night came courtesy of Coco Crisp. He went over the wall to rob Josh Hamilton of a laser beam blast of homer, marking the second time in the series he had performed such heroics, as he had taken a Trout homer off the boards on Monday.

Crisp’s thievery on Hamilton’s bid to touch ‘em all was so improbable that it fooled the Anaheim Angles Stadium fireworks operator, who had already set off the celebratory polytechnic explosive that mark a home team home run.

Crisp’s reaction to the premature celebration was priceless. He stood in center and wagged his finger Dikembe Mutombo-style at Hamilton, the Angels and their hapless fireworks guy. 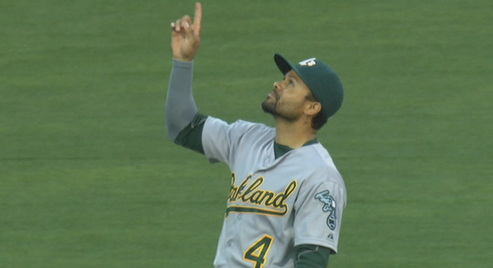 By winning on Wednesday, the A’s have a three-and-a half-game lead on the surging Angles. While it’s notable that Anaheim is finally getting its act together after struggling for the past two seasons despite their superstar-laden lineup, the A’s continue to be baseball best story.

Oakland’s 230 wins over the past three season are the most in the Major Leagues, despite having only MLB’s 25th largest payroll. (The A’s payroll of $83,401,400 is about a third of what the Dodgers cough up to hoover around .500.)

It’s not that the A’s lack talent. Their third baseman Josh Donaldson has been one of the best players in the game since last season, and Sonny Gray is one of baseball’s finest young hurlers. However, Oakland may well be the most anonymous in baseball. In fact, Coco Crisp is probably their best known player. Not because of his defense or nice speed/power combo, but because his name sounds like a delicious mash up of sugary breakfast cereals and he sports a pretty impressive Afro.

Although Moneyball made Oakland’s GM Billy Beane famous a decade ago, it’s the current incarnation of the A’s that will define what will be a pretty sterling legacy.

Instead of running out big name stars like Giambi, Tejeda, Chavez, Hudson and Zito, which the A’s were able to do when Michael Lewis was following the team, these — the real Moneyball A’s — rely heavily on retreads like good dad Brandon Moss, Scott Kazmir and Jed Lowrie, and employ and handful of clever platoons.

The next step for Oakland is playoff success. Something that has eluded them throughout Beane’s entire tenure. They will almost certainly be in the postseason again this year, and the Angels — who are finally justifing their enormous payroll — may well be the plucky A’s biggest obstacle to their first World Series since 1990. Judging by what happened this week, it could develop into a pretty special rivalry.