Martin Maldonado Literally Hits The Cover Off Of The Ball (VIDEO) 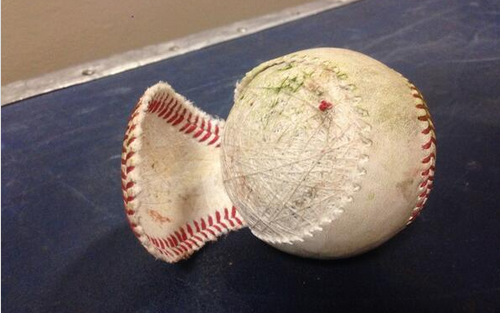 These days, when somebody says literally they usually mean figuratively. However, we’re doing no such thing when describing Milwaukee Brewers backup catcher Martin Maldonado‘s at-bat against Pittsburgh yesterday. Facing Charlie Morton, Maldonado took a big cut at a fast ball.

But he didn’t’ quite square the pitch and the result was a weak grounder to third baseman Pedro Alvarez. When Alvarez went to field the dribbler, he was the first to learn something was amiss.

Maldonado’s bat had removed a good chunk of the cover from the ball. Alvarez wasn’t able to get a good grip on the flayed sphere and his throw to first came in on four hops, allowing Maldonado an easy infield single. Check out the video below

“I feel like I hit it on the barrel, not on the end of the bat,” Maldonado said. “But when I looked down, I see that something was spinning. I never thought it was the ball uncovered. I thought he threw it to second base. Then I looked back and saw the ball and I was like, ‘That’s kind of weird.’

“That’s a hit. I’ll take it. I think that’s the only infield hit I’ll ever get, other than bunts,” the slow-footed backstop added. Maldonado would score later in the inning on another, more traditional infield single and the Brewers would win the game 5-3.

As for the ball, it was given to the Brewers clubhouse attendant, and Maldonado plans on keeping it as memorabilia.

“I’ve never seen it in my life,” said Brewers first baseman Mark Reynolds. “Sometimes you see a guy hit a ball off the end of the bat, and it’s, like, cut. But I think he barreled it. I don’t know what happened. It’s interesting.”

“I mean, I remember as a kid when you use the same ball so long that it tears,” a laughing Uecker said. “We’d tape it up and keep on playing.”

Twitter was also abuzz with folks discussing how Maldonado had “literally” torn the cover off of the ball. Marking the first time the majority of folks on the microblogging service were using the word “literally” correctly.