This summer, Jose Canseco has been touring the country in his RV on what he is calling the “All-Star’s Home Run Tour.”

The 17-city show has been hitting minor league parks around the country, and it gives contestants the chance to square off against the 50-year old former MVP in both baseball and softball home run hitting events.

The former bash brother was at Fresno’s Chukchansi Park, home of the Giants Triple-A affliate Fresno Grizzlies on Tuesday. He defeated all three challengers in the baseball hitting contest, but did fall to one of the three beerleaguers in the softball slugging part of the exhibition.

“For 50 years old, I still have pretty good hand speed,” he told the Fresno Bee afterward. “It keeps you young and as long as you can stay active, go out there and have a great time.” According to Canseco, the furthest he’s hit a baseball in the tour is “around 500 feet.”

Canseco also still has his sense of humor, judging from this photo taken during the event. 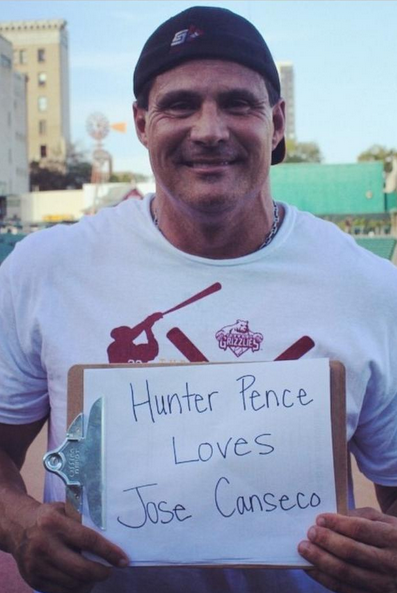 The sign is a riff off of the fun Mets fans were having with Hunter Pence a couple weeks back. The original signs, displayed in the right field bleachers of Citi Field when the Giants were in town, had barbs like “Hunter Pence puts ketchup on his hot dog” and “Hunter Pence can’t parallel park.”

It’s true, Canseco hasn’t always been the easiest guy to cheer for. But he know how to laugh at himself and  he’s always a blast on Twitter.