Manny Machado Hits The Disabled List. How Long Will He Be Out? 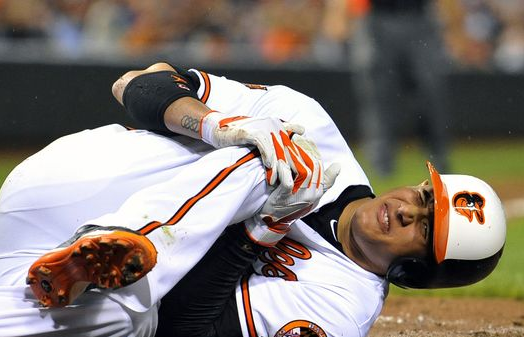 Between the injuries and the petulance, Manny Machado is having a rough season. He was helped off the field during last night’s game between the Orioles and Yankees after rather grotesquely twisting his knee while running to first base on a ground ball to Derek Jeter.

After the game, Baltimore manager Buck Showalter said the 22-year old’s condition was “a lot more positive than the way it probably looked.”

Well, it’s not that positive today, as the O’s placed Machado on the 15-day disabled list with what is being called a right knee strain.

The Orioles haven’t disclosed how bad a sprain it is — and they may not know at this point. By saying it’s a strain it just rules out a complete tear of the ligament, and Machado could be ultimately be out anywhere from just the 15 days to the entire season.

Machado similarly twisted his left knee running to first base on September 23, 2013 and opted for surgery to prevent further dislocation. According to injury expert Will Carroll, this may suggest there is something genetically off about his knees, and more preventive surgery may be needed.

Machado missed the first month of the 2014 season recovering from that injury and then got off to a slow start. However, he had been hitting .351 since July 1, pushing his .OPS to a respectable 755.

The Orioles are expected to move Chris Davis across the diamond to third in Machado’s absence. Given that Machado is the best fielding third baseman in baseball and Davis is a below-average first baseman who only has 68 career starts at third it’s safe to say Davis is a major defensive downgrade at the hot corner.

To replace Machado on the roster, the Orioles are calling up Cord Phelps. The 27-year old is a .159 career major league hitter who was hitting .258 in Triple-A. Again, not so inspriring.

However, the Orioles have been getting surprising production from surprises places this year. Steve Pearce and Delmon Young we’re talking about you.  Maybe Showalter will also be able to untap the platoon-split beast hiding under Phelps mediocre shell, and the journeyman will be able to help the Birds maintain their 6.5 game lead in the American League East until Machado is able to come back. 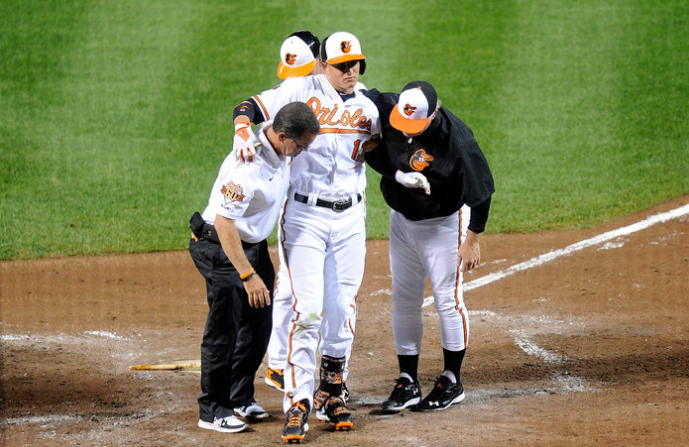 One thought on “Manny Machado Hits The Disabled List. How Long Will He Be Out?”