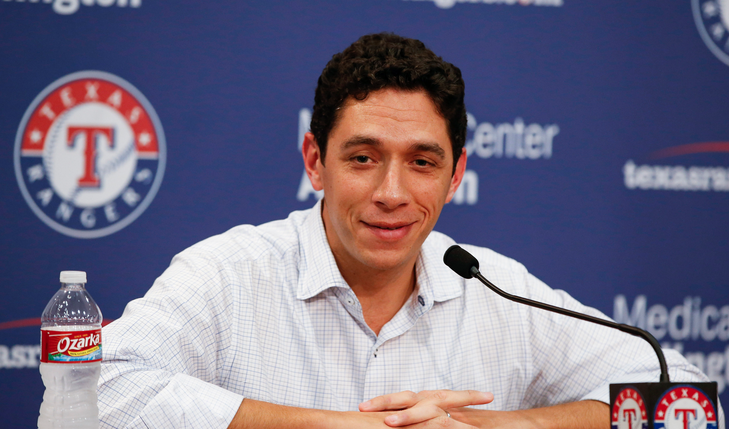 Last week it was reported that Texas Rangers GM Jon Daniels will listen to trades for anyone on the team.  A retool would be prudent in Arlington. The Rangers had a nice half-decade run which included two World Series appearances, but this year find themselves 11 games under .500 and 15 games out of first place in the American League West.

Rangers still do have talent on their roster; a good chunk of their woes in 2014 can be attributed to injuries. So a total rebuild wouldn’t seem to be in order. This also means they have assets to trade. Let’s rundown what Rangers are most likely to be dealt by the July 31 trade deadline.

Infield
If Jon Daniels had a time machine, he’d go back to last November and undo the trade that sent Ian Kinsler to the Tigers for Prince Fielder. (Although he probably wouldn’t admit it.) Fielder, who is about the same age his similar-shaped dad was when he started to rapidly decline, was lousy in Arlington for a month-an-a-half and then had neck surgery, ending his season. Kinsler is having the best season of his career in Detroit, where he’s a dark-horse MVP candidate. To make matters worse Jurickson Profar, the uber-prospect who was supposed to replace Kinsler at second, is likely out for the season with a torn shoulder muscle.

Fielder is basically untradeable at this point.  Profar will get some calls, but he’s still just 21 and the Rangers would be foolish to deal him at a time his trade value is at its low. Profar can also play shortstop, which ultimately makes incumbent SS Elvis Andrus expandable. 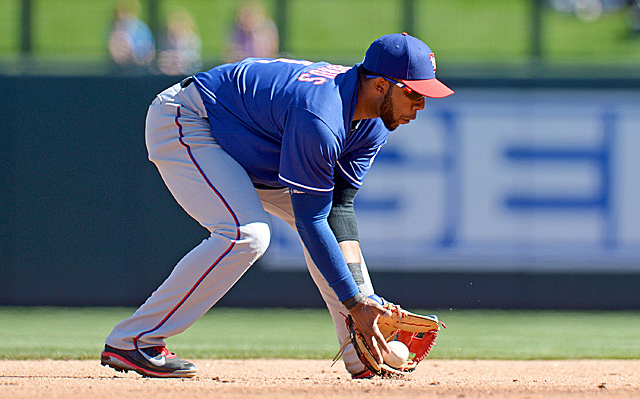 Andrus’ 8 yrs/$118M dollar contract starts in 2015 and gives him outs in ’18 and ’19. He’s a slick fielder, but his offense is pretty anemic , especially given his home field. There is also some evidence the 25-year old’s defense is already declining and we imagine most teams would want to avoid his unwieldy, player-friendly contract.

20-year old prospect Rougned Odor has been pretty good manning second for the past month and a half.  The Rangers will listen on him, given his positional overlap with Profar. But the return would have to be a young arm of the same pedigree.

A GM on a contender would be wise to take a chance on the 34 million third baseman Adrian Beltre is owed in 2015 and 2016. The most underrated player in the game and a stealthy Cooperstown candidate, Beltre is hitting a cool .335 with a .889 .OPS this year. The 35-year olds defense isn’t at the same level as it was a few years ago, when he rated as one of the best to ever play the position. But it’s still solid, and there aren’t a lot of difference makers at the hot corner these days. Daniels has backtracked a little from his “everyone available” stance, and clarified that Beltre and ace Yu Darvish are untouchable. Still, given his age, Daniels would be wise to listen on Beltre deals — especially since Profar can also play third and we don’t think Andrus is going anywhere. If a team were to offer a a top prospect or two, it might be prudent to deal Beltre.

Outfield
The Rangers acquired outfielder Alex Rios for basically nothing last year in a post-deadline deal. He’s making $12.5 million this year and can be bought out next year for a million. He should be gone at the deadline and has played decently enough over the past season that Texas may even get a little in return. Shin-Soo Choo’s 7 yrs/$130M deal is already a horror and an albatross — they’ll paying the rapidly declining corner outfielder $21 million when he’s 37 — and if any rival GM lost their mind and made a waiver claim on Choo we’re sure Daniels would unload him for nothing. So a trade for value certainly isn’t in the South Korean’s future.

Leonys Martin plays a nice center field, has good speed and a manageable contract (he makes $4.75 million in 2015, the last year on his deal.) But he’s not an impact bat and it’s doubtful the Rangers would get enough to make a trade worth their while. He would work as a throw in in a potentially bigger deal.

Starting Pitching
Injuries have hit the Rangers pitching staff hard. Nick Martinez is out for the year. Matt Harrison is too, and has barely pitches since 2012. Colby Lewis is returning from a 2013 lost to arm surgery and hip troubles and so far the results haven’t been that promising. Then there is Yu Darvish, who we would imagine is as untouchable as anyone in baseball. Not only is he a top-five pitcher in the prime of his career but the Rangers paid about half of his “salary” upfront in posting fees, and he is making a bargain $10 million per until 2018.

Lewis’ last start was pretty good, and if he could get it together in his next few turns the 2015 free agent may get some nibbles. But other than that, we can’t see a Rangers starter moving.

Bullpen
Joakim Soria has been showing signs of the dominant closer he was pre-Tommy John, and there are certainly teams out there who would be interested in his .71 FIP, 12.7 Ks per nine innings and $7.5 million 2015 team option.  Since the 30-year olds arm could fall off at any moment, and he doesn’t seem to be in the Rangers long term plans, consider him a goner if someone offers Daniels a prospect type. Veteran reliever Jason Frasor has pitched well enough to demand more than a bag of balls, as has his left-handed counterpart Neal Cotts. But they are both middle relief pitchers, so it won’t be that much more than a bag of balls. 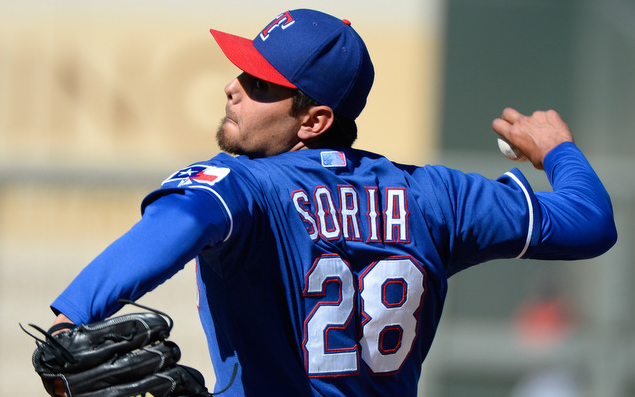 What will happen at the deadline:
Alex Rios will have a new address, and judge Daniels on whether he gets a little something decent or nothing much in return. Expect a bullpen arm or two to ship out, but unless its Soria it wouldn’t be for anything but a A-ball lottery pick type. The Rangers would love to deal Andrus, and in the unlikely event they do the front office gets a gold star. We also think Beltre is a dark horse trade candidate for a move, despite his “untouchable” status.