How To Break In A Baseball Glove 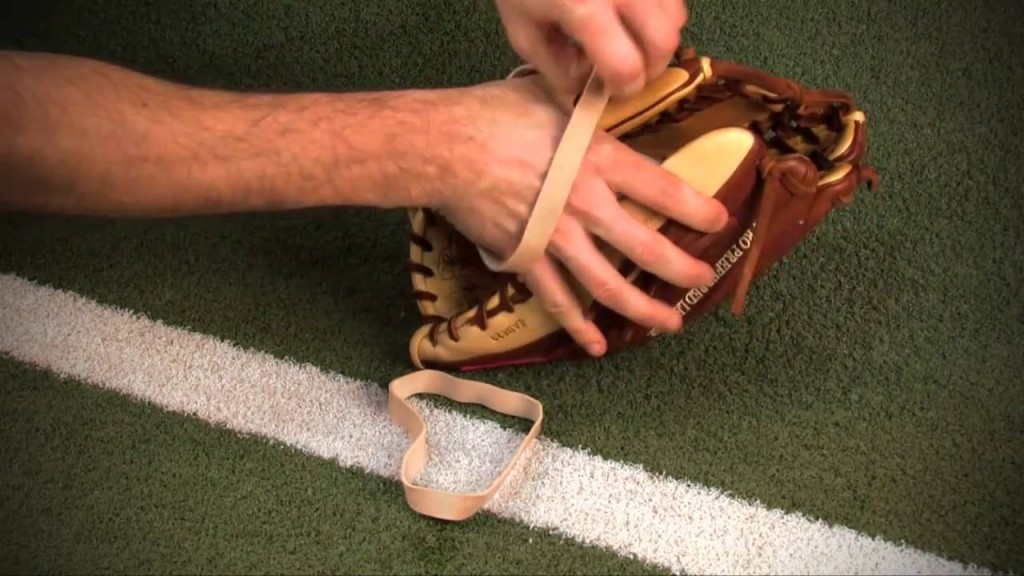 Breaking in your first baseball glove is a rite of passage for any young ball player. Sure many of today’s modern gloves (particularly the cheaper synthetic models) claim that they come already broken in. But the relationship between the glove and the player is intimate one, and breaking in a glove is part of the essential getting-to-know-you process between man and leather, whether or not it is completely needed.

The first step in breaking in a baseball glove is to soften its leather. One of the most popular ways to do this is by rubbing the mitt down with oil. Baby oil, Vaseline, special glove oil and even shaving cream can be used in this process. 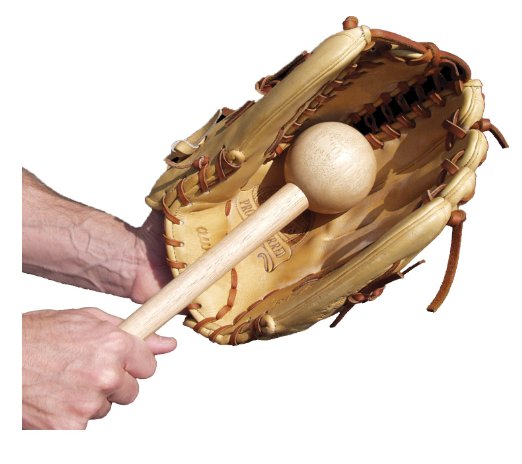 Other methods for making the glove softer would be beating it up. This can be done with a hammer or mallet.  If you want to keep it in sport, just beat the mitt with a baseball bat. You can also just play catch with it. It still might be a little tight at first, but baseball activities in a non-competitive environment is probably the most natural way to continue to loosen up its leather.

There is also a school of thought that says heating the glove is the best way to begin the breaking in process. This can be achieved in a microwave or  an oven. Although in both cases it’s important to monitor the glove during the heating, or you will end up with a flaming glove and a kitchen that smells like rawhide. In the summertime you can heat the glove by leaving it in a warm car. 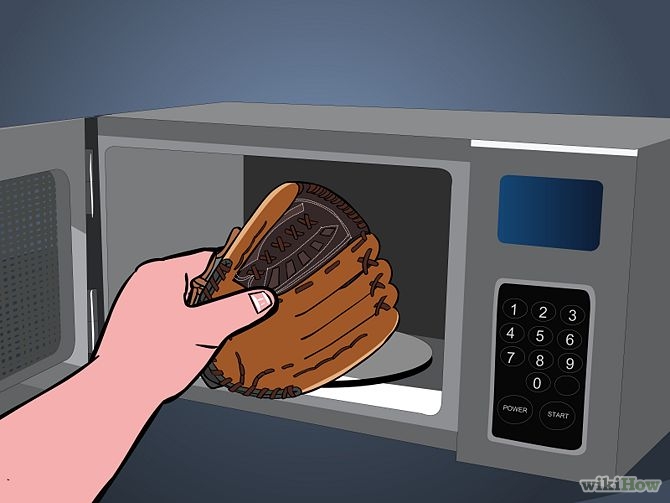 These methods of breaking in a glove are not mutually exclusive and in fact your mitt would probably benefit from being subjected to more than one of these techniques.

When the softening is done you are going to want to do next (and lastly) is form the pocket. This has traditionally been achieved by placing a ball in the glove and then wrapping it up with twine or rubber bands overnight. Other twists on this method would be putting the ball and glove under your mattress and sleeping on top of it or running it over with your car. We’d be a little wary of the car method because it seems like it could damage the glove (or your tire) but others have said it is effective.

In a 2010 web article, ESPN asked leading major leaguers how they liked to break in their baseball glove. The most popular method among the players was to soak it with water and then microwave it for about ten seconds. (Doug Mientkiewicz warned not to microwave for too long as he had learned the hard way that rawhide will eventually melt.)

Torii Hunter has his own unique spin on the water/microwave progression by using a hot tub for the soaking part. Ken Griffey Jr. admitted he just sends his gloves to his dad, the former major leaguer Ken Griffey Sr.

But Mark DeRosa may have the most cleverest (and most lazy) method for breaking in his mitt. He asks his Rawling’s glove representative to save him the glove that he used as a sample during his tour of spring training. But the time it gets to DeRosa it’s been tested out by players on 10 to 12 different teams and is probably broken in. That’s some good thinking from the University of Pennsylvania grad. However since you probably don’t have your own personal glove representative  you should probably just stick to the glove oil. 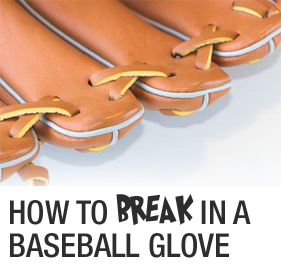