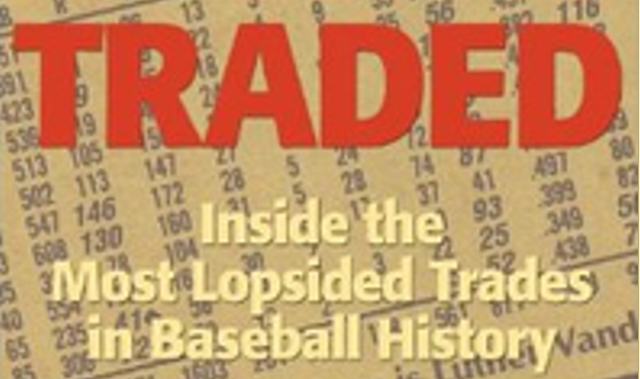 Whenever a baseball team makes a big trade fans hold their breath. “Will this one come back to haunt us?” Here are a collection of trades that certainly have fans wondering what could have been. Read on for the ten worst trades in baseball history.

Number 10: Phillies trade Larry Bowa and Ryne Sandberg to the Cubs for Ivan de Jesus
The Philadelphia Phillies were one of the better teams in baseball throughout the late seventies and into the early eighties. But their star-studded lineup was starting to get old and after the 1981 season they decided to flip their longtime shortstop, five time all-star Larry Bowa, to the Cubs for shortstop Ivan de Jesus. De Jesus wasn’t as accomplished as Bowa but had the advantage of being almost eight years younger. The only problem is to sweeten the deal for the Cubs Philly threw in twenty-one year old minor league second baseman Ryne Sandberg. De Jesus and Bowa’s performance would be roughly equal for the few years. However Sandberg went on to win the MVP in 1984, spend his entire career with Chicago, and retired as one of the top three best second baseman to ever play the game.

Number 9: Kansas City Athletics Trade Roger Maris to Yankees
The Athletic franchise played fourteen seasons in Kansas City and really never flirted with a winning record during that time period. However things may have been a little different if the team didn’t make a horrendous deal with the New York Yankees after the 1959 season. The A’s and the Yankees were often trade partners — so much so that Kansas City was jokingly referred to as New York’s minor league team. So it was no huge surprise when KC shipped off their one 1959 all star, slugger Roger Maris, a part of a seven player deal with the Bronx Bombers. What is surprising is that Maris would win the MVP in 1960, would set the all-time single season home run record in 1961, and would helped lead the Yankees to five straight World Series apperences, including back-to-back titles in ‘62 and ‘63. None of the other players in the deal went on to do anything of note.

Number 8: Rangers Trade Adrian Gonzalez and Chris Young to the Padres for Adam Eaton and Akinori Otsuka
Adrian Gonzalez was the number one overall pick in the 2000 draft for the Florida Marlins was pretty good during his first few years in the minor leagues. However that didn’t prevent him from being traded to the Texas Rangers in 2003 before he ever played in the majors. The Rangers didn’t know what they had in Gonzalez either, apparently, because they flipped him to the Padres after the 2005 season along with pitcher Chris Young for Akinori Otsuka, a decent relief pitcher, and Adam Eaton, a mediocre starter. Once in San Diego — his hometown — Gonzalez immediately morphed into one of the top sluggers in baseball. On top of that, Young was one of the better starters in the National League for San Diego during the 2006 and 2007 seasons, before injuries derailed his career. On the other side of the trade, Eaton quickly went from mediocre to awful and Otsuka continued to be decent, but retired from the major leagues after two years.

Number 7: Phillies trade Ferguson Jenkins to the Chicago Cubs for Bob Buhl and Larry Jackson
The Phillies misfortune of trading young Hall of Famers to the Chicago Cubs and getting nothing in return didn’t start with the Ryne Sandberg debacle. In fact, trading Ryno was almost a carbon copy of a mistake they had made early in the 1966 season when they traded Fergie Jenkins for Bob Buhl and Larry Jackson, two solid starting pitchers who were both well on the wrong side of thirty. To be fair Jackson was pretty good for the Phillies for the next couple years, which were all he had left in his 36-year arm. But Buhl was not good at all and beginning in 1967 Jenkins rattled off six straight twenty win seasons for the Cubs, a run which included the 1971 Cy Young Award. Fergie would end up in Cooperstown, while Jackson and Buhl have now long been immortalized in lists of awful baseball trades.

Number 6: Expos Trade Grady Sizemore, Cliff Lee and Brandon Phillips to Cleveland for Bartolo Colon
The deal in which a contender flips a few minor league prospects to a struggling team for a veteran approaching free agency is a trade deadline classic. And usually it doesn’t come back to hurt the contender too bad, because most prospects never realize their full potential. But when the Montreal Expos sent farmhands Grady Sizemore, Cliff Lee and Brandon Phillips to the Cleveland Indians for Bartolo Colon during the 2002 season lighting struck three times for the Indians. Sizemore, Lee and Phillips all developed into big time players and have each made at least three All-Star games. That’s not to say Colon didn’t continue to pitch well — the big fella won a Cy Young in 2005 and had a 18 win season in 2013 at age 40. It’s just he didn’t do any of this for the Expos, who lost him after 2002 to free agency after stumbling to a disappointing 83 and 79 record that season. 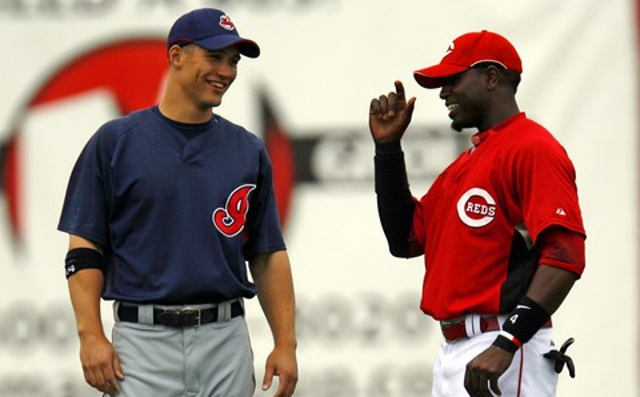 Number 5: Cubs Trade Lou Brock to Cardinals for Ernie Broglio
When the Cubs traded Lou Brock to the Cardinals for Ernie Broglio in the middle of the 1964 season it didn’t seem like that big of a deal. Yeah, Brock was fast. But he had been having trouble getting on base during the first two and half years of his career and he was getting caught stealing an awful lot when he did. Anyway, Broglio was a still-young pitcher who had almost won a Cy Young. But there must have been something Brock liked in the Missouri water because almost immediately upon arriving in St. Louis he started to resemble the Hall of Famer baseball fans know him as, hitting .348 as a Cardinal and helping them to the 1964 World Series. Brock would also play a big part St. Louis’s 1967 World Series title and finished his career as one of the great leadoff hitters to ever play the game. Broglio would win seven games total for the Cubs.

Number 4: Red Sox Trade Jeff Bagwell to Astros for Larry Andersen
Not only was Jeff Bagwell one of the better hitters in the Boston Red Sox’s minor league system during the late eighties but he had been born in Boston and grew up in Connecticut. Sounds like keeper, right? Wrong. In 1990 the Red Sox traded Bagwell to the Houston Astros for set up man Larry Anderson at the trade deadline. Anderson couldn’t have been better for Boston, helping them make the playoffs with his sterling 1.23 ERA in twenty-five appearances. But Boston didn’t advance out of the first round and the 37-year old Anderson, a free agent to be, signed elsewhere after the season. Bagwell quickly made the Red Sox pay for their lack of faith, winning the National League Rookie of The Year in 1991. He would add the MVP in 1994 and was the most dominant hitter in the National League over the decade of the nineties. He retired in 2005 and currently has the twenty-first best OPS in Major League history.

Number 3: Mets trade Nolan Ryan to the California Angels for Jim Fregosi
In the early seventies the New York Mets had two of the best young pitchers in baseball in Tom Seaver and Jerry Koosman. They also had another guy, Nolan Ryan, who had a million dollar arm but also quite a bit of trouble throwing the ball over the plate. Figuring they already had enough young pitching, the Mets traded Ryan and his limitless potential for shortstop Jim Fregosi in 1971. Fregosi had been a perennial All-Star in the sixties, but he was coming off the worst season of his career and it didn’t get much better in New York. Ryan, on the other hand, suddenly developed into fireballing fiend we know him as. He won seven American League strikeout titles during his eight seasons with the Angels and almost had a few Cy Youngs. His finished his Hall of Fame career as Major League’s all-time strikeout leader and it sure would have been something to see him paired with Tom Seaver during the primes of their careers.

Number 2: Reds trade Frank Robinson to the Orioles for Milt Pappas
During his decade with the Cincinnati Reds Frank Robinson was one of the best hitters in baseball and had an MVP, a Rookie of The Year and six all-star selections to show for it. But in 1965 the team shipped him to Baltimore for pitcher Milt Pappas. While justifying the somewhat mystifying trade, team owner Bill DeWitt added insult to injury by referring to Robinson as an “old thirty.” Now Pappas was no slouch. He was a solidly better than average young pitcher. But the pressure of being traded for Robinson weighed on him and he struggled mightily in Cincy. Robinson, on the other hand, went on to excel like few have ever excelled before. The slugger promptly won the triple crown and MVP in 1966 and also led the Orioles to their first World Series title that year. It would get even better for Robinson 1970 as the “old” 35 year old powered the Orioles to their second World Series title, this time defeating the Reds — the team that had so unceremoniously cast him away — in the Fall Classic.
Number 1: Red Sox Trade Babe Ruth to Yankees for Cash
The worst trade in baseball history was actually a sale involving the greatest player in baseball history. By 1919 Babe Ruth had already established himself as both the best hitter and one of the best pitchers in the game and had led his Boston Red Sox to three World Series championship in his six year. But Red Sox owner Harry Frazee, who was also heavily involved in Broadway production, needed to raise money to stage the play “No, No Nanette.” So he sold Ruth, who was still only twenty-four, to the Yankees for a hundred thousand dollars. You know the rest. Ruth, who immediately switched to being a full time hitter, had a run of comparative greatness which has never been matched and was instrumental in establishing the Yankees as the premier sports franchise in American history. “No, No Nanette,” which finally opened in 1925, was a solid but unspectacular box office earner. 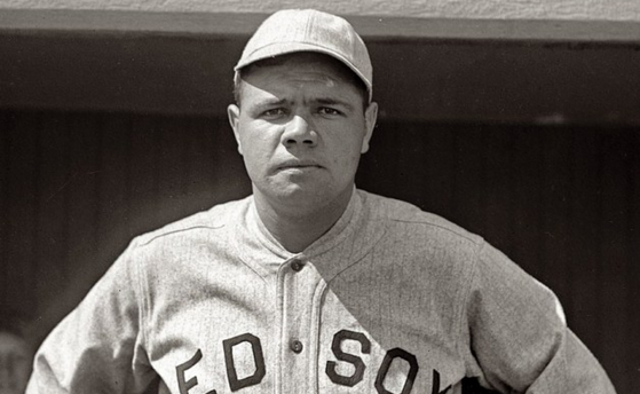