Where Will The Angels Turn After Garrett Richards’ Injury? 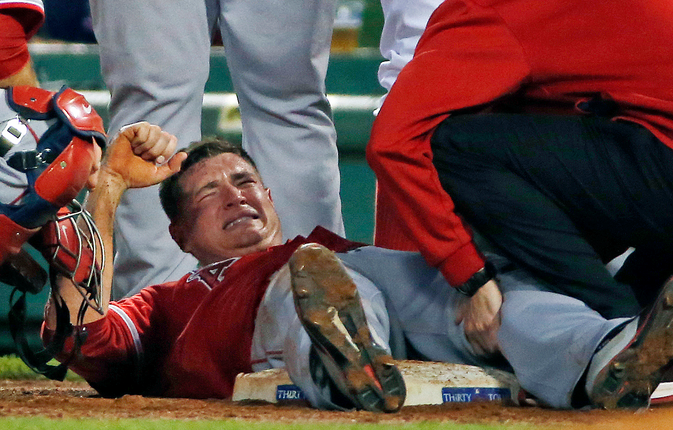 Garrett Richards picked up quite the RBI last night. Being he’s a pitcher in the American league, that acronym unfortunately stood for “real bad injury.

The Angels ace was running to cover first base in the second inning of the Angels game against the Red Sox when his leg buckled. The 26-year old writhed around on the ground for about eight minutes before being carted off on a stretcher.  The Angles are calling the injury a “knee/patellar injury,” and the initial diagnosis is not good.

“It doesn’t look too good for him,” fellow ace Jered Weaver to MLB.com. “He’s been our guy all year. He’s been that guy you count on to get deep in games and pull out a victory. To have something like that happen is obviously a crushing blow to any team. Our thoughts and prayers are with him, and hopefully it doesn’t turn out as bad as everyone thinks it is.”

Weaver added that when Richards went down he could hear the righty’s scream from the dugout.

Richards was 13-4 with a 2.61 ERA and 164 Ks, making him a dark horse Cy Young candidate. He was also part of a remarkably stable pitching staff for Los Angles, who have only have only had six starters take the mound this season.

That’s about to change for the team with the best record in baseball. Richards’ injury, which appears to be season ending, comes on the heels of Tyler Skaggs hitting the 60-day DL with left elbow surgery.  The Angels have three in-house candidates who could replace Richards.

Wade LaBlanc has made 68 big league starts in his career and has been OK this season in Salt Lake City, the Angels Triple-A affiliate. Randy Wolf has 133 big league wins, but is 37 and currently struggling in Salt Lake.

Chris Volstad, a third pitcher in the Angels system with Miami Marlins ties, is also in Salt Lake City’s rotation. However, his 5.45 ERA there is even worse than the 4.94 mark he’s put up in a big league career that’s included 123 starts.

Because the Angels have baseball’s best record it makes it difficult for them to make a waiver deal for a starter. Jon Niese and Yu Darvish (who’s currently on the DL) have both made it through waivers, but neither is expected to be traded and the Angels don’t have the prospects to change their respective teams’ minds. Any other viable AL starter would have to pass through every other team in the league for the Angels to be able to make a claim, and a NL starter would have to pass through all the teams in both leagues.

Bartolo Colon and Jorge De La Rosa are quality pitcher that would be available and the Angels could target through the August 31 waivers.  However as long as Oakland — who are a game and half behind the Angels in both the AL West and for the best record in baseball — can block a deal between the Angels and the Mets or Rockies with a preemptive claim, don’t expect that happen.

So it looks like the Angels will have to rely on their less-than-inspiring in-house options to replace their ace. We’re betting they go with the experience of Wolf.

One thought on “Where Will The Angels Turn After Garrett Richards’ Injury?”