A baseball score sheet or scorecard is the form which baseball fans, journalists and announcers use to keep score. The baseball scoresheet was invented by sportswriter Henry Chadwick in the 1870s, but the methods of keeping score have evolved significantly since then.

The most typical way of getting a baseball score sheet is to purchase a program at a baseball game. You can also download sample score sheets from the Internet and print them out for use while watching games on TV.

The most basic pillar of baseball scorekeeping is the numbers that correspond with each position. The pitcher is 1, the catcher 2, the first baseman 3, the second baseman 4, the third baseman 5, the shortstop 6, left field 7, center field 8 and right field 9.

The trickiest of these numeric symbols is the shortstop being 6 while the third baseman is 5 because that is out of order if you read the infield from left to right.

So, when keeping score if a batter grounds out to the third baseman you would write 5-3 in the corresponding at-bat box. Meaning the third baseman threw it to the first baseman to record the out. If a batter flies out, you would just put the number of the fielder who made the catch. Double plays would include all the fielders in involved, in order if their invovlement, as well as a “DP” symbol. Also when a player tips the ball and another player picks it up and records an out the player he first touched it gets first credit on the score sheet. (So if the ball hit the pitcher on the way to the shortstop it would be 1-6-3.)

If the batter strikes out that is recorded with a K on the score sheet. If he strikes out looking it is either a backwards K or a K with a small c, for “called.” 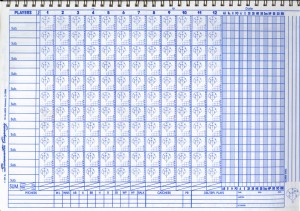 Each at-bat box on a scoresheet has a small baseball diamond on it, and when a player reaches base the scorekeeper indicates that by filling in the line to the base that he reaches. If the reaches by a single, for example, the scorekeeper would write 1B and then fill out the line to first base. A double would get a 2B with both the lines to first and second darkened.

If a player reaches base by walk the symbol is BB. IBB for an international walk and HBP for a hit by pitch. A reach base by error is indicated by an E followed by the player who made the error. (An error by the second baseman would be “E4.)

Keeping score is a fun way of engaging yourself in a baseball game. And don’t be afraid to add your own personal little touches to a baseball scoresheet. As long as you maintain consistency, you don’t need to follow the traditional rules to a tee.