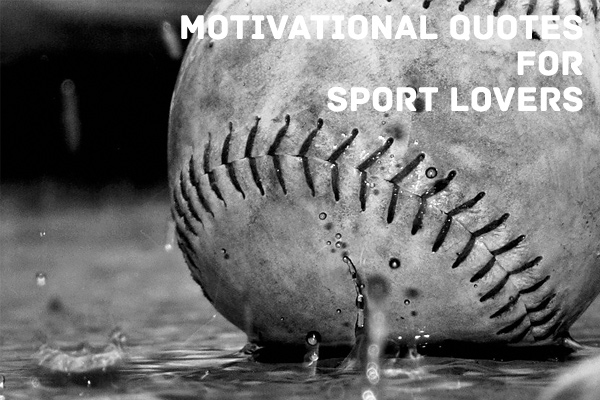 Baseball players say the darndest thing. Over the game’s century-and-a-half history many funny, insightful, wise or ridiculous things have been articulated about our national pastime. We’ve compiled some of these great baseball quotes below.

“Baseball is ninety percent mental. The other half is physical.” — Yogi Berra
And you thought giving 110 percent was enough.

“It ain’t over ’til it’s over.” ― Yogi Berra
Before it was a Lenny Kravitz song, that was baseball’s leading philosopher summing up the game — and life. 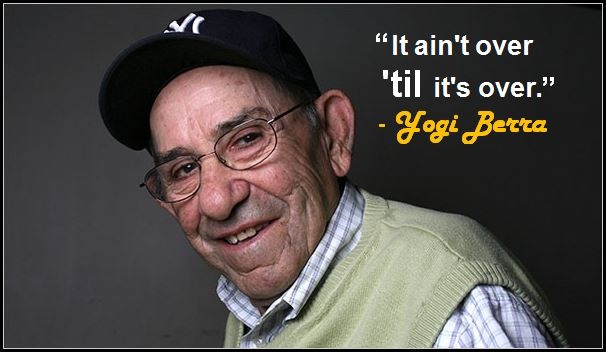 “I’d rather be lucky than good.” — Lefty Gomez
The Yankee legend seems like he understood the fickle nature of the pitcher’s win/loss record before the sabermetricians took it down.

“They broke it to me gently. The manager came up to me before a game and told me they didn’t allow visitors in the clubhouse.”– Bob Uecker
Uecker has made a very successful second career out of his self-deprecating schtick.

“You can sum up the game of baseball in one word: ‘You never know.’ “– Joaquin Andujar
Besides his inability to count, the explosive right hander happened to be one of the more volatile and unpredictable players of his time

“A ballplayer spends a good piece of his life gripping a baseball, and in the end it turns out that it was the other way around all the time.” — Jim Bouton
Bouton, who wrote the legendary baseball book “Ball Four,” always had a way with words.

“Baseball is the only field of endeavor where a man can succeed three times out of ten and be considered a good performer.” — Ted Williams
By that measure Williams’ .482 lifetime on-base percentage makes him a great performer

“I don’t rate them, I just hit them.” ― Willie Mays
The Say Hey Kid liked to keep it simple.

“It helps if the hitter thinks you’re a little crazy.” – Nolan Ryan
It also helps if you can throw 101. 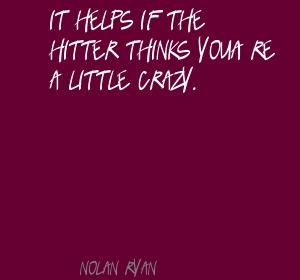 “I’m glad I don’t play anymore. I could never learn all of those handshakes.”- Phil Rizzuto
Being well into his 70s was probably also preventing Scooter from making a comeback

“I have an Alka-Seltzer bat. You know-plop, plop, fizz, fizz, when the pitcher sees me walking up there he says, “Oh, what a relief it is’.”– Andy Van Slyke
Van Slyke was actually a pretty darn good hitter — and he wasn’t so bad with long analogies either.

“The doctors x-rayed my head and found nothing.” — Dizzy Dean
Maybe that explains the first name.

“You want proof that baseball players are smarter than football players? How often do you see a baseball team penalized for too many men on the field?”– Jim Bouton
They also have longer careers, get paid more money, suffer fewer injuries and don’t have to wear form fitting tights. But who’s counting?

“People ask me what I do in winter when there’s no baseball. I’ll tell you what I do. I stare out the window and wait for spring.”– Rogers Hornsby
Granted there really wasn’t a whole lot to do back in the 1920s.

“The trouble with baseball is that it is not played the year round.” — Gaylord Perry
Apparently there wasn’t a whole lot to do in the ‘60s either.

“Why does everyone stand up and sing Take Me Out to the Ball Game when they’re already there?” — Larry Anderson
Leave it to a relief pitcher to make an obvious point nobody’s ever made before.

“They should move back first base a step to eliminate all those close plays.” -John Lowenstein
Yeah, that oughta work.

“I was in Little League. I was on first base-I stole third base. I ran straight across the diamond. Earlier in the week, I learned the shortest distance between two points is a straight line. I argue with the umpire that second base was out of my way.”-Steven Wright
And that is why Wright became a comedian rather than a ballplayer.

“I’d rather you walk with the bases loaded.” — Earl Weaver
The long-time Orioles’ manager was responding to Evangelical Christian outfielder Pat Kelly telling Weaver he should walk with God.

“If you know how to cheat, start now.”- Earl Weaver
This was Weaver’s advice during a mound visit to struggling pitcher Ross Grimsley.

“Washington: First in war, first in peace, and last in the American League.” — Charlie Dryden
This quote from the newspaper writer stuck with the Senators their entire wretched existence.

“They give you a round bat and they throw you a round ball. And they tell you to hit it square.” –Willie Stargell
So that’s why baseball is so hard.

“Nobody ever said, “Work ball!” They say, “Play ball!” To me, that means having fun.” — Willie Stargell
But despite this, Stargell kept things in perspective. 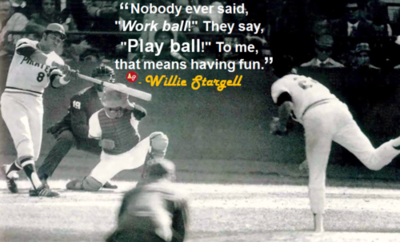 “I don’t make speeches. I just let my bat speak for me in the summertime.” — Honus Wagner
Granted, he may have plagiarized Teddy “Speak Softly” Roosevelt a bit with this one.

“I never questioned the integrity of an umpire. Their eyesight, yes.” — Leo Durocher
This is a prime example of how Durocher got his nickname of “The Lip.”

“Baseball is like church. Many attend, few understand.” ― Leo Durocher
The baseball as a church analogy is pretty played out. But here, Durocher does it right.

“The last time the Cubs won the World Series was 1908. The last time they were in one was 1945. Hey, any team can have a bad century.”– Tom Trebelhorn
The Cubbies might be losers, but at least they encourage some good quotes. 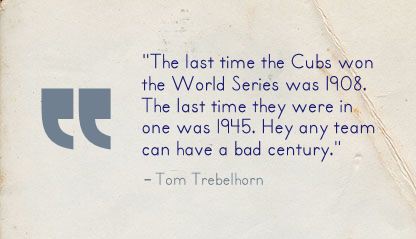 One thought on “Famous Baseball Quotes”