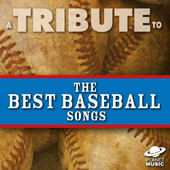 When it comes to writing songs about sports, baseball definitely leads the pack as lyrical subject. Here are the ten best baseball songs of all-time.

Oddly, neither the song’s lyricist Jack Norworth nor composer Albert Von Tlizer had ever watched a baseball game when they wrote the ditty that is still played during the seventh inning stretch of most major league games. (It has also given Cracker Jacks literally hundreds of millions dollars worth of free advertising over the years.)

While you surely know the chorus of the song, which is what is performed during baseball games, the original “Take Me Out To the Ballgame” is actually a fully developed ballad about a young lady who is so baseball mad that she turns down a date with her boyfriend to go the ballpark and watch her favorite team play.

Key Lyrics:
Take me out to the ball game
Take me out with the crowd
Buy me some peanuts and Cracker Jack,
I don’t care if I never get back. 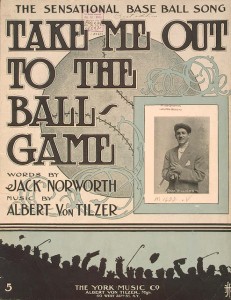 Number 9: “Cheap Seats” Alabama, 1993
Minor League baseball and country music have a lot of similarities. Both are full of hard luck stories, dusty old towns and life on the road. So it would be appropriate that the legendary country music band Alabama would write what many consider to be the finest song about minor league baseball.

“Cheap Seats” tells story about minor league team in a town that’s neither big or small. The town’s residents go to games, and eat hot dogs with mustard and relish while drinking flat beer. They aren’t always sure who the players are, due to the transient nature of the minor leagues.  But they cheer just the same. The song’s official video features the band singing and footage of minor league baseball games.

Key Lyrics:
We don’t worry about the pennant much.
We just like to see the boys hit it deep.
There’s nothing like the view from the cheap seats.

Number 8: Talkin’ Baseball (Willie Mickey and The Duke) Terry Cashman, 1981
Terry Cashman, a singer-songwriter who had also played minor league baseball in the late ‘50s, was depressed about the 1981 baseball strike.  So he wrote a song which described the history of baseball from the ‘50s to the present — basically the span of his fandom.

“Talkin’ Baseball” became known for its “Willie, Mickey and The Duke” refrain and Cashman says the song was in fact inspired by a poster of the three famous New York City center fielders.

But they are hardly the only players referenced in the song. Yogi Berra, Bob Feller, Henry Aaron, Tom Seaver, Mike Schmidt and George Brett are just a handful of the legendary players who are referenced.  And all the name dropping makes the song an ear feast for any serious baseball fan.

Key lyrics:
The Man and Bobby Feller.
The Scooter, the Barber, and the Newc,
They knew ‘em all from Boston to Dubuque.
Especially Willie, Mickey, and the Duke. 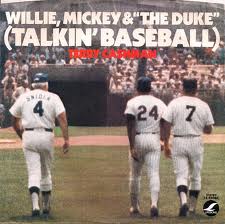 Number 7: The Greatest Kenny Rogers, 1999
Say what you will about Kenny Rogers or his chicken, but there is no doubt the man can belt out a ballad. “The Greatest” was actually written by Dan Schlitz, who also penned the signature Kenny Rogers song ‘The Gambler, and it tells the tale of a little boy, a baseball and a baseball bat.

Bragging that he is “the greatest,” the boy imagines he is at-bat with the game on the line and throws the ball up in the air to hit it. Swing and a miss. While this doesn’t affect the youngster’s confidence, it doesn’t make him a better hitter either, and he swings and misses two more times — three strikes and you’re out.

But such failure doesn’t deter this future big league, and the song humorously ends with him telling his mother what a great pitcher he is.

Key lyrics:
Now the little boy doesn’t say a word, picks up his ball he is undeterred.
Says, “I am the greatest that there has ever been”
And he grits his teeth and he tries again.
And the ball goes up and the ball comes down

Number 6: “(Someday We’ll Go) All the Way” Eddie Vedder 2007
While Pearl Jam frontman Eddie Vedder is associated with Seattle, thanks to his band’s grunge sound, he spent a good chunk of his childhood on the North Side of Chicago and has been a lifetime Cubs’ fan.

In fact, Vedder had been a regular at the Cubs fantasy camp where he met Ernie Banks, who requested Vedder write a song about the Cubs.

You can’t turn down a Hall of Famer, so Eddie Vedder penned the song “(Someday We’ll Go) All The Way. Written and performed in the style of a sing-along drinking song or sea shanty, the song discusses the Cubs and the majesty of Wrigley Field with the “someday we’ll go all the way” refrain gently referencing the’ Cubs hapless streak of not winning a World Series since 1908.

Key lyrics:
We’re like brothers in arms in the streets and the stands
There’s magic in the ivy and the old scoreboard
The same one I stared at as a kid keeping score
In a world full of greed, I could never want more
Than someday we’ll go all the way

Number 5 “Joe Dimaggio Has Done It Again” Billy Bragg and Wilco, 1999
For the Mermaid Avenue albums, singer Billy Bragg and Wilco teamed up to write and record songs built from the previously unheard but completed lyrics of folk singer Woody Guthrie, who had died in 1967.

The second volume of the project contains the song Joe DiMaggio Has Done it Again,” which is ode to the Yankee Clipper.  Or, more specifically a majestic home run, that DiMaggio hit. It is the first of three classic baseball songs that reference Joe DiMaggio, whose grace and elusive personality have long seemed to inspire songwriters and creative types.

Key lyrics:
Up along the clouds where the eagles roam
Joe cracked that ball to whine and moan
His buddies all laugh as they trot on in
Joe DiMaggio’s done it again

Number 4 “Catfish” Bob Dylan, 1975
Bob Dylan has always had a talent for biographical songs, most prominently “The Hurricane” about boxer Rubin Carter and “Joey,” about mobster Joey Gallo.

He also wrote a song about Catfish Hunter, the Hall of Fame pitcher for the A’s and the Yankees, who each dominated the 70s when they had Catfish on the mound. The song was part of the 1976 recordings for the album Desire, but it didn’t make the final cut. However Joe Cocker covered the song on his 1976 album Stingray, as did Kinky Friedman on his 1976 album Lasso From El Paso.

The original song was finally released on the 1991 Dylan compilation “The Bootleg Series Volumes 1–3 (Rare & Unreleased) 1961–1991.” The tune makes reference to Hunter’s famous free agent move from the A’s, where he won three three World Series, to Yankees, where he won two more.

The song has him striking out Reggie Jackson. This is notable because 1975, the year it was recorded, was the only season in Hunter’s career that he didn’t play on the same team as Jackson.

Key lyrics:
Even Billy Martin grins
When the Fish is in the game.
Every season twenty wins
Gonna make the Hall of Fame.

Number 3: Glory Days Bruce Springsteen 1984
Glory Days was the fifth single off of Bruce Springsteen’s mega-hit album Born in the USA. In the song’s first verse the protagonist runs into an old friend who had been a baseball star in high school and they reminisce about the good times they had. The pitcher with the great “speedball” was based on Springsteen’s childhood friend Jim DePugh, who he had played Little League with.

The song’s baseball theme is even more drawn out in the accompany music video. In it, Springsteen pitches to a wooden backboard with a strike zone and then to an actor playing his son. Bruce pretends he is facing then San Diego slugger Craig Nettles, who “gets him the bottom of the ninth.”

Number 2: “Mrs. Robinson” Simon and Garfunkel
Paul Simon didn’t specifically write Mrs. Robinson for the movie The Graduate, which both featured the tune and also debuted it on its soundtrack. In fact the original lyric it was Mrs. Roosevelt, as in Eleanor, the former First Lady.

But the “Where have you gone Joe DiMaggio” part, in which Simon laments the disappearance of the Yankee Clipper from public life, was always the same.

The song initially annoyed DiMaggio, who replied that he hadn’t gone anywhere. It also apparently irked Mickey Mantle, who was Simon’s childhood hero but never got a song.

Simon explained to DiMaggio that it was a sincere tribute to his unpretentious heroism during what was a simpler time. After hearing this, DiMaggio went on to embrace the song.

As for Mantle, Simon diplomatically told him that the selection of DiMaggio as a subject was simply about the number of syllables in their respective names.

Key Lyrics
Where have you gone, Joe DiMaggio?
A nation turns its lonely eyes to you
What’s that you say Mrs. Robinson
Joltin’ Joe has left and gone away.

Number 1: “Centerfield” John Fogerty, 1984
Whether with Creedence Clearwater Revival or as a solo artist, John Fogerty had a special knack for writing hard-driving songs with unforgettable chorus. “Centerfield” was the title track of Fogerty first solo album, which he wrote in 1984 after a nine year hiatus from music.  It was as catchy and as rockin’ as anything he had done before or since

The song is all about the optimism of baseball — the new grass on the field, the bench warmer who believes he has what it takes to be a starter. Fogerty references center fielders Willie Mays, Ty Cobb and Joe DiMaggio in the tune.

“Centerfield” has become a staple at ballparks over the years and in 2010 the song was honored by the Baseball Hall of Fame with Fogerty becoming the first musician to ever be celebrated at the Hall’s induction ceremony.

Key Lyrics
Got a beat-up glove, a homemade bat, and brand-new pair of shoes;
You know I think it’s time to give this game a ride.
Just to hit the ball and touch ‘em all – a moment in the sun;
It’s gone and you can tell that one goodbye! 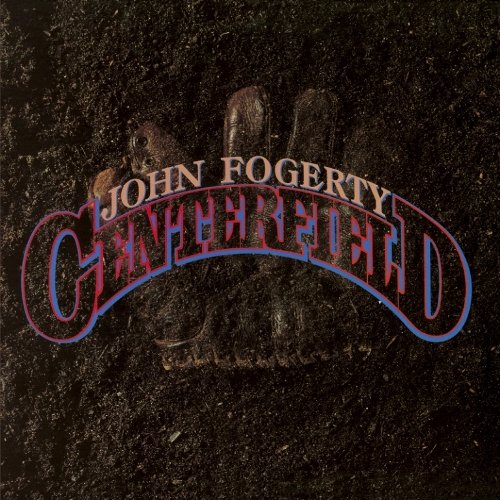