MLB Gives Ortiz Second Hit During Darvish’s No-Hit Bid. Why Do We Even Have Errors Anymore? 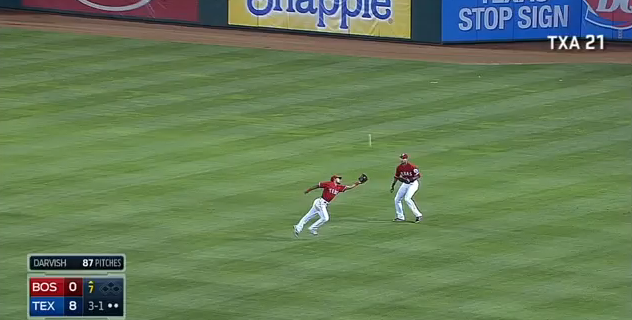 The first time came with two outs in the top of the seventh. The burly DH hit a towering pop up into shallow right, not far from where rookie second baseman Rougned Odor  — he’s Venezuelan, because you’re probably wondering where that name came from — was playing him in the shift.

As Odor backed up a few steps he felt right fielder Alex Rios coming in and the ball ended up dropping between the two. (You can see the video here.)

The trend in baseball has been to call these type of pop ups that nobody gets a glove on hits. However, MLB’s rule book clearly states you can charge an error on any play that should have been made with “ordinary effort.” Mindful that Darvish was working on a perfect game, the official scorer correctly ruled it E-7.

Although he was no longer perfect, Darvish still had his no-hitter with two outs in the top of the ninth. Again he faced Ortiz and again Big Papi hit a ball to the right side.

This one was a grounder which would have been right at Odor if he had been playing where a second baseman traditionally plays. But, thanks to the shift, the ball made it to the outfield unmolested — a pure, if unusually placed, single. For the second time in his career Darvish would lose a no-no with one out to go.

Or so we thought. Ortiz and the Red Sox appealed the scoring decision in the seventh, and yesterday major league baseball stepped in and declared Ortiz’s lazy pop had been a hit too.

“I think it was a hit in the moment,” Red Sox manager John Farrell said. “Upon further review, obviously, they changed it. I think in the end, the right call has been had.”

Appealing scoring decisions has become all the rage over the last couple seasons. In a particularly egregious case earlier this year the Brewers protested when the official scorer ruled that a ground ball Logan Schafer creaked by a statue-like Ryan Howard was an error. It was later switched to a double and an RBI by the league, Antonio Bastardo‘s ERA be damned.

Neither Howard or Schafer deserved their hit. In both cases it was a play a Little League should have been able to make. But since scoring decisions have become so lax and always in the favor of the hitter we guess we understand why they ended up appealing and why, for the sake of consistency, the league ruled in their favor. Although we’re certain the league would not have reversed the call if Darvish had ended up retiring Ortiz in his next at-bat, making the consistency argument a bit tricky.

You could actually make a good case for baseball eliminating errors altogether. There’s a lot of luck in batting average and ERA; singles bloop in, screaming liners get snagged. Yet these outcomes tend to even out over time. Since nobody takes fielding percentage seriously anymore, why not also put errors into hitter/pitcher luck-bucket?

If baseball wasn’t such a game rooted in tradition and statistics we’d say eliminating errors would be an easy call. However, it would be more difficult to compare Sandy Koufax‘s ERA to Clayton Kershaw if only one was getting the benefit of unearned runs. Or Ty Cobb‘s batting average to Miguel Cabrera.

Plus no errors mean fewer no-hit bids, and fewer opportunities for Baseball Tonight to throw to live cut-ins of history in the making.

So we’re probably stuck with the current paradigm: grown men whining because they were’t given a hit on a play a little kid could have made.