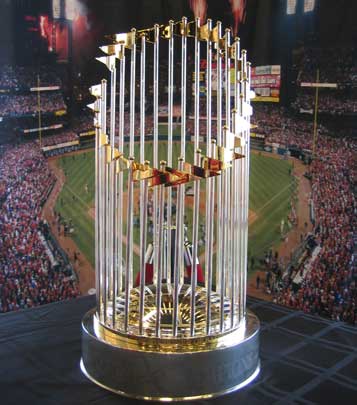 Major League baseball offers an impressive array of trophies every. Players and other baseball personnel can earn this hardware by their performance on the field or on the community or sometimes even a combination both.

Learn more about all Major League Baseball’s awards — and the trophies that come with them — below.

All Star Game MVP (Ted Williams Most Valuable Player Award)
Given since 1962, the plaque has gone through many name changes throughout its history. Initially called the “Arch Ward Memorial Award,” for the man who conceived of the All-Star game, it became “The Commissioner’s Trophy” in 1970. But in 1985 the World Series trophy was renamed the Commissioner’s Trophy, reverting the All Star MVP back to the Arch Ward Memorial Award. In 2002 it became the Ted Williams Most Valuable Player Award. Four players, Willie Mays, Gary Carter, Steve Garvey and Cal Ripken jr., have won it twice.

Babe Ruth Award
The Babe Ruth award — a standing trophy — is awarded by the New York Chapter of the Baseball Writers of America to the most outstanding player in the postseason. From it’s inception in 1949 to 2006, it just awarded World Series performance, and played second fiddle to the MLB sanctioned World Series Most Valuable Player Award — especially since it wasn’t awarded until several weeks after the World Series.

However, the move to include the entire postseason, not just the Fall Classic, in 2007 created a niche for the trophy and added to its prestige. Two players, Jack Morris and Sandy Koufax, have won the Babe Ruth Award twice.

Best Major League Player ESPY Award
The ESPY Award is a crystal statuette given out during the ESPN ESPYS, which is the sports world’s equivalent to the Oscars or the Grammys. Since the ESPYS inception in 1993 there has been an award for Best Major League Player. Between 1993 and 2004 the award was determined by fans as well as experts such as sportswriters and retired players. Beginning in 2005 it was determined solely by Internet voters. Albert Pujols and Barry Bonds have the most baseball ESPYS with four. Pedro Martinez has also been a multiple winner.

Branch Rickey Award
Named after the legendary Dodger executive, the Branch Rickey Award is given to an individual involved with Major League baseball for excellence in community service. The winner receives a two-foot tall bronze sculpture of a baseball player.

Every year each team nominates one individual for the award and then the Rotary Club of Denver, who conceived of the award in 1992, decides the winner.

There has yet to be a multiple winner and the trophy doesn’t necessarily go to a player, as managers Tommy Lasorda and Bobby Valentine and Chicago White Sox executive Roland Hemond have all won a Branch Rickey.

Comeback Player of the Year Award
This is a trophy given to an American League and a National League player who have “re-emerged on the baseball field during a given season.” The award, which debuted in 2005, is a part of sponsorship agreement between Viagra and Major League Baseball. The winner is determined by panel of Major League Baseball beat writers.

While most of the winners are “coming back” for a serious injury, some, most notable Brad Lidge and Cliff Lee, took the trophy after getting their career back on track after a horrible year.

Cy Young Award
Named after all-time baseball wins leader Cy Young, the annual award for pitching excellence was first given in 1956. However it wasn’t until 1967 when baseball started giving out separate annual Cy Youngs for the American and National League.

Since 2010, a Baseball Writers Association of American scribe from each Major League city votes by ranking the top five pitchers in their league. Prior to 2010 there were only three pitchers per ballot.

The Cy Young Award is a large engraved plaque featuring a three dimensional hand clutching a baseball. Roger Clemens has the most Cy Young Awards with seven. Clemens, Randy Johnson, Pedro Martinez, Roy Halladay and Gaylord Perry have all won a Cy Young in each league.

To qualify for the award one needs at least 100 bats at DH. From 1973 and 2000 the winner was determined by the Associated Press’s baseball beat writers.. Starting in 2001 it became the domain of the Baseball Writers of America.

Red Sox slugger David Ortiz has the most Edgar Martinez Awards with six, and other multiple winners include Hal McRae (3) and Paul Molitor (2).

Hank Aaron Award
The Hank Aaron Award recognizes the best hitter in the each the American and National League. Introduced in 1999 to commemorate Aaron’s breaking of Babe Ruth’s all-time home run record 25 years earlier, the trophy is a mahogany home plate shaped box topped by a marble plate and a silver baseball bat.

There have been many methods of selecting the award throughout its history, including a purely statistical based formula. But since 2009 it’s been determined by online voting. Aaron presents the trophy to the two league winners before the fourth game of the World Series. Alex Rodriguez has the most Hank Aaron Awards with four.

Hutch Award
Named after former Big League Pitcher and manager Fred Hutchinson, who died of cancer in 1964, the Hutch Award goes to the active player who best exemplifies fighting spirit and competitive desire. It’s been given out since 1965, and each winner gets a replica of the original Hutch Trophy — a rather unique looking blue and yellow glass vase– which is on permanent display in Cooperstown.

Two winners, Jon Lester in 2008 and Dave Dravecky in 1989, are cancer survivors.

Major League Baseball Manager of the Year Award
Given annually in both leagues since 1983, the Major League Baseball Manager of the Year Award recognizes excellence in managing. The winner is determined by 28 members of the Baseball Writers Association of America, based on ballots in which they gave out first, second and third place votes. The trophy is an engraved crystal box. There have been many multiple winners with Bobby Cox and Tony LaRussa leading the way with four each. (Cox won one with the Blue Jays and three with the Braves, while LaRussa won two with the A’s, one with the White Sox and one with the Cardinals.)

Joe Girardi is the only manager to ever win the award with a losing record, taking the 2006 trophy while helming the fourth place Florida Marlins.

Major League Player and Pitcher of The Month Award
In 1958, the National League began giving out Player of the Month Awards. The American League started doing the same in 1974. By 1979 both leagues were also going with a Pitcher of Month award, making hurlers ineligible for the monthly player award.

Voting for the award takes place at the end of the regular season. However the results aren’t announced until after the World Series. Winners receive an engraved plaque that also pays tribute to Kenesaw Mountain Landis, the first MLB commissioner. Two BBWA writers from each Major League city vote on the award, ranking the top ten player with each first place vote worth 10 points, second place nine points etc.

Barry Bonds has the most National League awards with seven. Jimmie Foxx, Joe Dimaggio, Yogi Berra, Mickey Mantle and Alex Rodriguez all have three in the American League. Frank Robinson is the only player to win an MVP in both leagues. 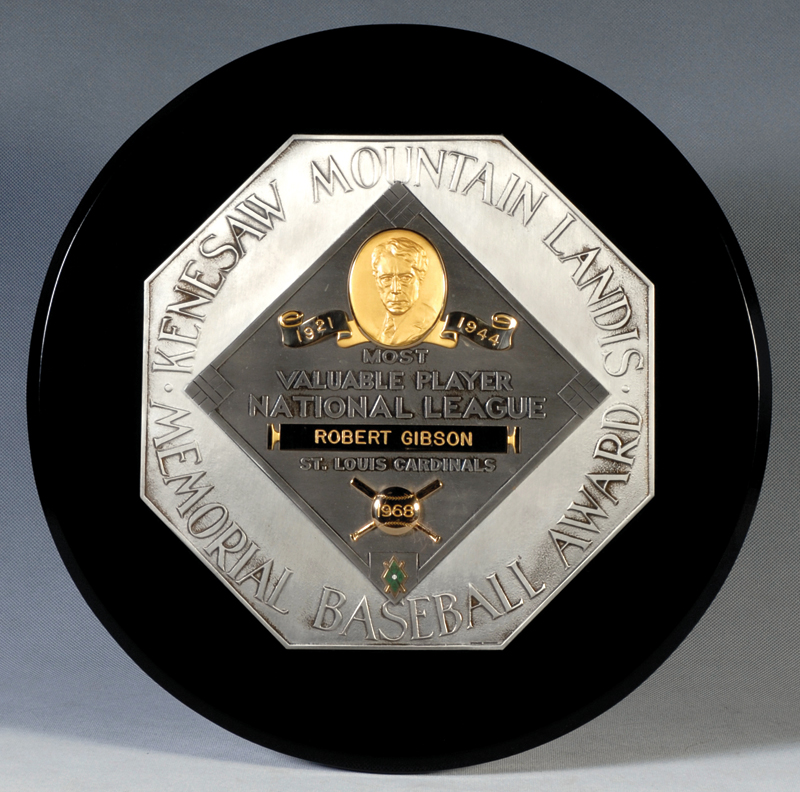 Major League Baseball Rookie of the Year Award
Officially called the Jackie Robinson award since 1987, the Rookie of The Year Award honors the best first year player in each league.

To qualify as a rookie a player can not have logged more than 130 at-bats, 50 innings pitched or 45 days on the roster of a Major League club before that year.

The trophy is a wood plaque with an attached brass baseball scene and metallic placards.

The award was first given out in 1947, to Robinson. In 1949 it was expanded from a Major League wide prize to a league specific one. 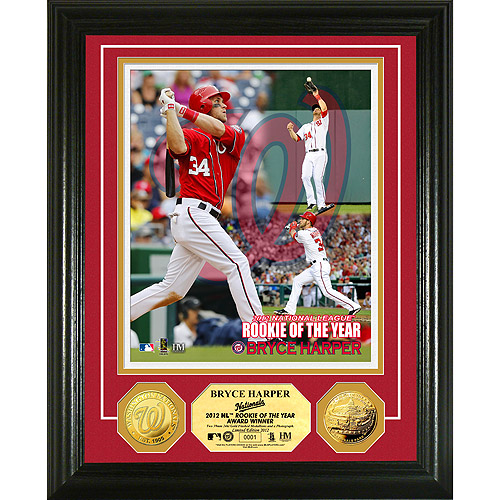 The trophy involves a crystal sphere and a baseball, and its recipients also have $50,000 donated to the charity of their choice by the MLBPA.

Voting for the Marvin Miller Man of the Year award is a multi-tiered process, with each team nominating a player, fans narrowing it down to six through online voting, and then the players picking the ultimate winner. Three players, John Smoltz, Michael Young and Jim Thome, have won twice.

Rawlings Gold Glove Award
Every year the Rawlings Gold Glove Award is given to nine players, one at each position, in the American and National League. The sporting good company Rawlings sponsors the award, and its trophy is made from a gold lame-tanned leather glove that has been attached to a wallet base. The award was first given in 1957. Between 1960 and 2010 the three outfield Gold Gloves were given without regard to outfield position — meaning three center fielders could win. Since 2011 separate awards for specific outfield position has once again became the norm.

Managers and coaches in each league vote on the Gold Gloves and cannot vote for their own players.

Pitcher Greg Maddux has the most Gold Gloves with 18, followed by third baseman Brooks Robinson and pitcher Jim Kaat, with 13 each. Darrin Estrad and Placido Polanco are the only two players to win Gold Gloves at multiple positions.

Roberto Clemente Award
The Roberto Clemente Award is given annually to the active player who “best exemplifies the game of baseball, sportsmanship, community involvement and the individual’s contribution to his team.” Known as the Commissioner’s Award when it began in 1971, it was renamed in 1973 to honor Clemente who had just died in a plane crash during a relief mission to Nicaragua.

The trophy is a lifelike figurine of Clemente. Each team nominates one player for the award and then the winner is selected by a combination of a panel of experts and fan voting. The winner receives the trophy during the World Series, and Chevy, the award’s sponsor since 2007, also donates money and a vehicle to the charity of the winner’s choice.

Nobody has ever won more than one Roberto Clemente Awards. 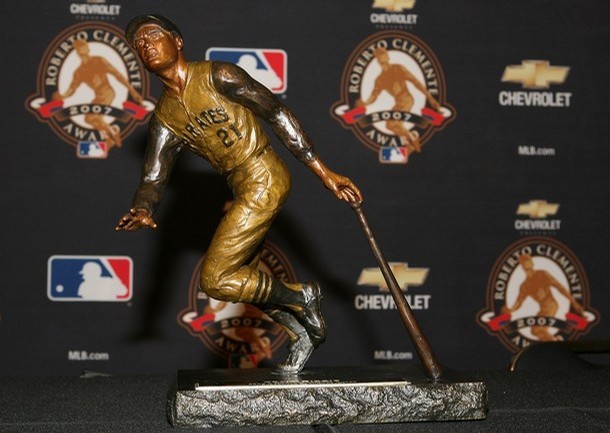 The trophy has featured various bottoms over the years, but it is always topped with a metal fireman’s hat. (Because closers put out the fire.) It is given out based on a purely mathematical formula in which saves and wins earn a points and loses and blown saves take points away. In 2000, a “Tough Save” provision was added which awarded an additional point if a relief pitcher enters the game with the tying run on base and still gets the save.

Bruce Sutter has the most National League wins with four. Mariano Rivera and Dennis Eckersley are tied with five wins in the American League.

Silver Slugger Award
Conceived in 1980 as somewhat of answer to the Gold Glove Awards, the Silver Slugger Award is given to the best offensive player at each position in each league. The award is determined by the votes of coaches and managers who aren’t allowed to pick their own players. The three outfielders are selected regardless of specific outfield position.

The award is sponsored by Louisville Slugger and the silver-sterling plated trophy features a three foot long replica bat.

Barry Bonds has the most all-time Silver Sluggers with 12, followed by Mike Piazza and Alex Rodriguez, who have ten each. 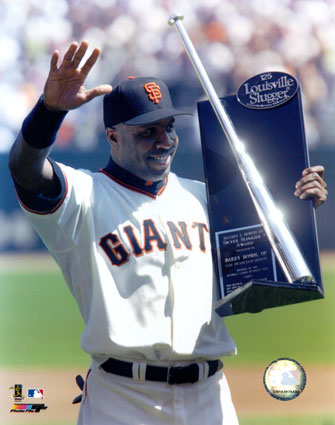 The trophy is silver and features a spherical pattern.

Pitchers have won 26 out of the 58 World Series MVPs. Sandy Koufax, Bob Gibson and Reggie Jackson are the only multiple winners, with two each. 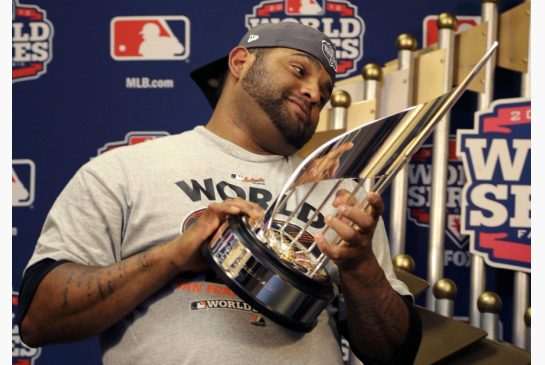