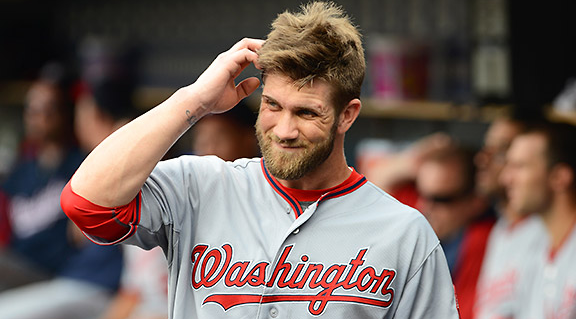 Mike Trout took round one of his first inter-league match-up with fellow phenom Bryce Harper on Monday, with the Angles defeating the Nationals 4-2.

Raul Ibanez, who at 41 is just about twice Harper’s age, delivered the big hit, a three-run double that clinched the game for Los Angeles. He didn’t figure in the scoring, but Trout went 2-5 and is leading all of baseball in WAR — just like he did during his first two full seasons.

Therein lies the problem for Harper. The 21-year-old has been good since he debuted in 2012. Quite good, if you consider his age. It’s just he hasn’t lived up to the almost impossible expectations created when Sports Illustrated put him on its cover at age 16, hailing him “baseball’s Lebron.”

We say “almost impossible” because Mike Trout, just a year older than Harper, has been every bit baseball’s Lebron. In fact, Trout has had the best first two seasons in baseball history, and looks to be on his way to making it the best first three.

So Harper was dealing with all of that when Trout and company came into town yesterday. He was also dealing with being bunched by Nationals manager Matt Williams on Saturday for lack of hustle. Harper, who didn’t properly run out a ground out, took his punishment like a man. “I respect his decision,” he said of his manager, displaying none of the churlishness he has in the past when talking to the media.

Harper is nursing an injured quad, and one could argue expending max effort on a ground out isn’t such a good idea under that circumstance. Then again, the Nationals weekend program featured a picture of Harper and the tag line “Nothing But Hustle,” so his lack of effort stood out even more to the sell out crowd. 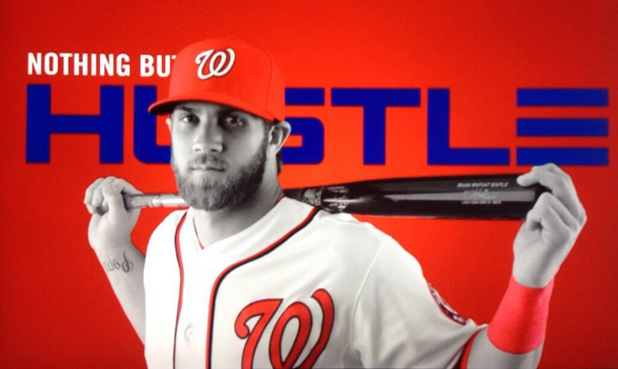 The incident with Williams and Trout’s trip to DC had Thomas Boswell, long-time Washington Post baseball writer, pen a column in which he referred to Harper as the Nats’ “seventh best player.” Although he didn’t list the first six, we assume he meant Ryan Zimmerman, Ian Desmond, Jayson Werth, Stephen Strasburg (who’s having a tough year) Jordan Zimmermann and Gio Gonzales. He also wrote this:

“If forced to choose whether Harper or Anthony Rendon would have the better career, I’d think twice. Harper is in a self-conscious, fierce scowl-off with baseball. Rendon dances with it and grins. Baseball loves relaxed.”

Rendon would be the Nationals infielder with just 478 career plate appearances. Rendon is more than two years older than Harper. Harper has plenty of time to relax.

While Boswell might be off with his Nationals rankings, he did hit on a pretty important point vis-a-vis Harper and Trout’s contact. Some, including Harper’s agent Scott Boras, have inferred the 6-year $144-million deal Trout singed earlier this season with the Angels was under-market.

The Nationals are going to want to pay Harper less than Trout because Harper is nowhere near as good. That could get interesting.